Australia calls on younger people to get virus tests 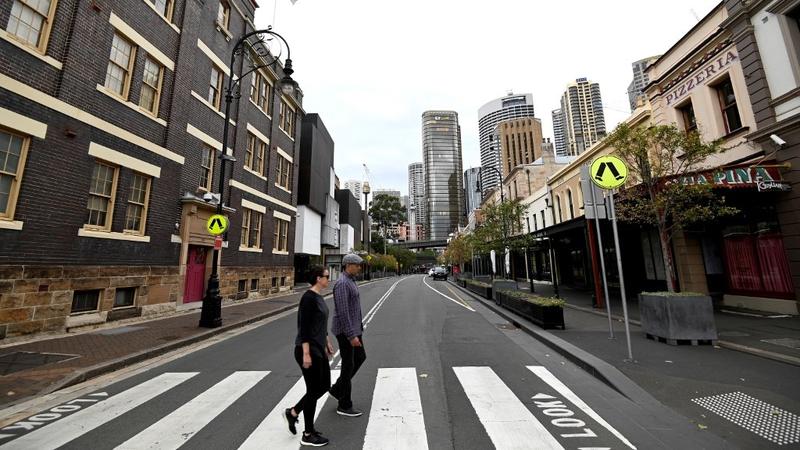 People walk through the streets of 'The Rocks' usually packed with tourists, in Sydney on May 18, 2020. New South Wales state eased public gathering and business COVID-19 coronavirus restrictions on May 15. (SAEED KHAN / AFP)

New South Wales (NSW), which includes the city of Sydney, is home to nearly half Australia’s roughly 7,100 coronavirus cases and plans to let pubs and restaurants host up to 50 seated patrons from June 1, from 10 now.

That has prompted health officials to remind people to maintain social distancing measures and increase testing to prevent a “second wave” of infections.

NSW has recorded a total of 3,086 coronavirus cases and has recorded nearly half the country’s total deaths which local media reports said had risen by one to 102 on Saturday. Neighbouring Victoria, where the latest death occurred, reported 10 new infections in the previous day.

Australia’s low number of COVID-19 infections and deaths, relative to many other countries, has been attributed mostly to a closure of national and state borders and a nationwide stay-home order now being unwound by states under a three-step federal plan.

Singapore’s contact-tracing phone app, “Trace Together,” will remain voluntary for “as long as possible,” Foreign Minister Vivian Balakrishnan said in an interview with Sky News Australia.

“It is a hybrid system based on public support, keeping public trust, and maintaining privacy,” Balakrishnan said, according to the ministry’s transcript of the interview published online Friday. “I think it is very important to have those features, because otherwise contact tracing will not work.”

About 1.5 million residents have downloaded the app, or between 20 percent and 25 percent of the city-state’s population, he said. Officials are considering other contact-tracing devices, such as a dongle that could boost participation by mitigating the loss of phone battery life since the phone app runs on Bluetooth technology, said Balakrishnan.

Singapore is on the verge of ending a “circuit breaker” period that limited business operations and consumer mobility, with measures slightly eased from June 2. Through Friday, the city-state had reported more than 30,000 confirmed virus cases and 23 deaths -- a relatively low count compared with global peers.

Thailand on Saturday reported three new coronavirus cases and no new deaths, bringing the country’s total to 3,040 confirmed cases and 56 fatalities since the outbreak started in January.

The new cases are two Thai nationals recently returned from overseas and under quarantine and a 49-year-old Italian man living in Phuket, said Panprapa Yongtrakul, a spokeswoman for the government’s coronavirus task force.

There are 2,916 patients who have recovered and returned home since the outbreak started, Panprapa said.

In a bulletin, the ministry said total infections have risen to 13,777, while deaths have reached 863. But 85 more patients have recovered, bringing total recoveries to 3,177. 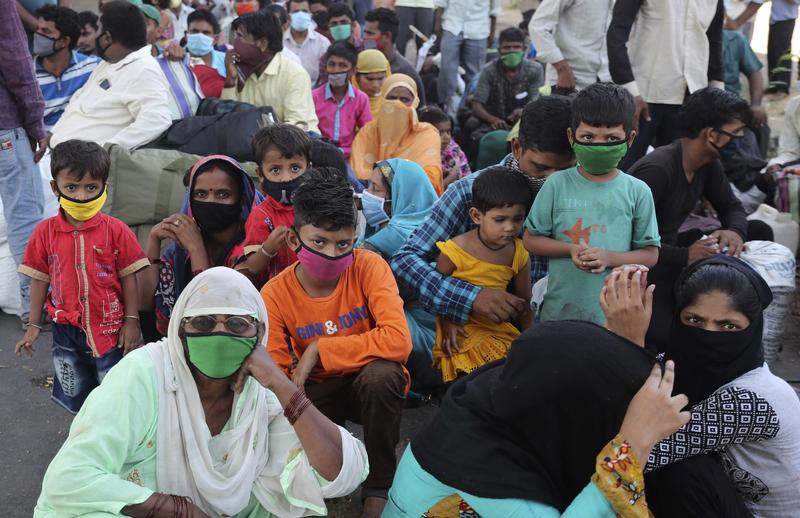 Migrant workers and their families wait to board buses for their onward journey by train to their home states, in Mumbai, India, May 22, 2020. (RAFIQ MAQBOOL / AP)

India on Saturday reported the biggest single-day spike in COVID-19 cases during the last 24 hours, pushing the infection tally across country to 125,101, the federal health ministry said.

According to the ministry data, the death toll has risen to 3,720 after 137 people died in the last 24 hours.

It was the second time in a week that the tally of COVID-19 cases has surged by over 6,000 in one day.

The recovery rate of COVID-19 patients Saturday increased to 41.39 percent as 51,783 people have been cured across the country.

Indian capital city Delhi has the fourth highest number of cases in the country (12,319). The city recorded 660 new patients on Friday as the number of containment zones, where restrictions are in place to contain the illness, rose from 79 to 92 in a single day.

The number of confirmed COVID-19 cases in Bangladesh reached 32,078 including 1,873 new cases confirmed in the last 24 hours, the biggest daily jump since March 8, a senior health ministry official told a media briefing on television on Saturday.

With 20 new deaths, the COVID-19 death toll in the country reached 452 on Saturday, said Professor Nasima Sultana, additional director general of Directorate General of Health Services under the Ministry of Health.

The official said 10,834 samples were tested in the last 24 hours across Bangladesh.

During the last 24 hours, 296 more patients were released from hospitals and clinics, bringing the number of recovered patients in the country to 6,486.

Cambodia's Ministry of Health (MoH) announced on Saturday that one more person was tested positive for the COVID-19, bringing the total number of the confirmed cases in the kingdom to 124.

The new patient is a 39-year-old Cambodian woman who returned to Phnom Penh on May 8 from New York, the United States, with a connecting flight in South Korea, the MoH said in a statement.

Vandine said the Southeast Asian country has so far recorded a total of 124 confirmed COVID-19 cases, with 122 patients cured.

Iran on Saturday moved to open businesses, religious and cultural sites as it eases restrictions imposed to contain the coronavirus pandemic

Iran on Saturday moved to open businesses, religious and cultural sites as it eases restrictions imposed to contain the coronavirus pandemic.

Museums and historical sites are to reopen on Sunday to coincide with the Eid el-Fitr celebrations that end the Muslim holy fasting month of Ramadan, President Hassan Rouhani said on state television.

Holy shrines — some of which became focal points of the coronavirus epidemic in Iran - will reopen Monday.

Rouhani said on Saturday that 88 percent of the fatalities from COVID-19 in Iran were victims with underlying illnesses.

According to health ministry figures, more than than 7,000 have so far died from the pandemic in Iran and more than 130,000 have been infected.

The Syrian Health Ministry said Friday that a new COVID-19 case was registered in the country in addition to one new death and one recovery, according to the state news agency SANA.

The new case and new death were recorded among Syrians who have recently returned from Kuwait as part of the ongoing efforts by the Syrian government to bring back Syrians who have been stranded abroad as a result of the coronavirus crisis.

With the new update, Syria has so far recorded 59 COVID-19 infections, including 37 recoveries and four deaths, according to the ministry.

The Syrian government has recently eased the measures against the spread of the COVID-19 virus but kept a partial curfew in place while urging civilians to take precautions and maintain social distancing. 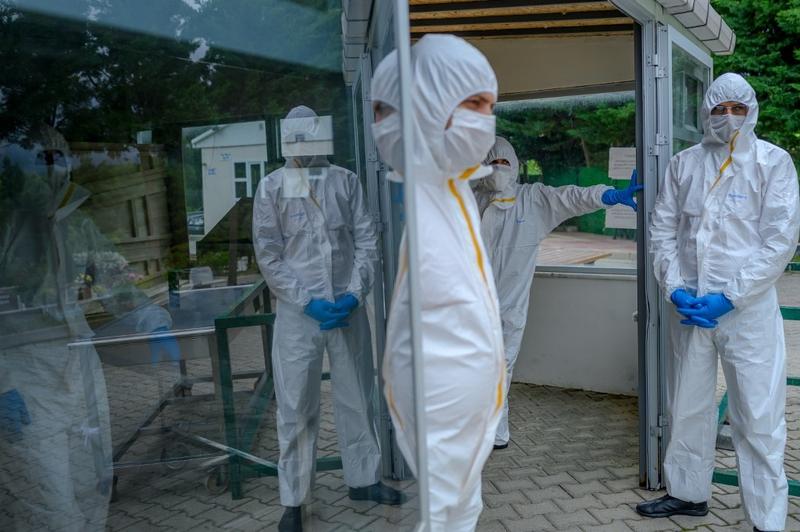 Istanbul municipal morgue workers, wearing suits and face masks prepare to remove coffins of people who died of COVID-19 at the Cekmekoy morgue in Istanbul, on May 21, 2020, amid the COVID-19 outbreak caused by the novel coronavirus. (BULENT KILIC / AFP)

The death toll surged to 4,276 after 27 new fatalities were reported in the past 24 hours, the minister tweeted.

Yemen's health authorities on Friday recorded 12 new COVID-19 infections, bringing the total confirmed cases in the the government-controlled provinces of the war-ravaged Arab country to 205.

So far, the pro-government health authorities recorded only six recoveries of all the infected patients since the outbreak of coronavirus on April 10.

The Iraqi Health Ministry on Friday recorded 87 new cases of COVID-19, bringing the total number of infections to 3,964 in the country.

Among the new cases, 48 were recorded in the Iraqi capital of Baghdad, the ministry said in a statement.

Seven of the infected people died during the day in Baghdad hospitals, bringing the death toll to 147, while 2,483 have recovered so far.

A total of 175,830 tests have been carried out since the outbreak of the disease in the country, according to the statement.