Brazil jumps to world number 2 in coronavirus cases, behind US 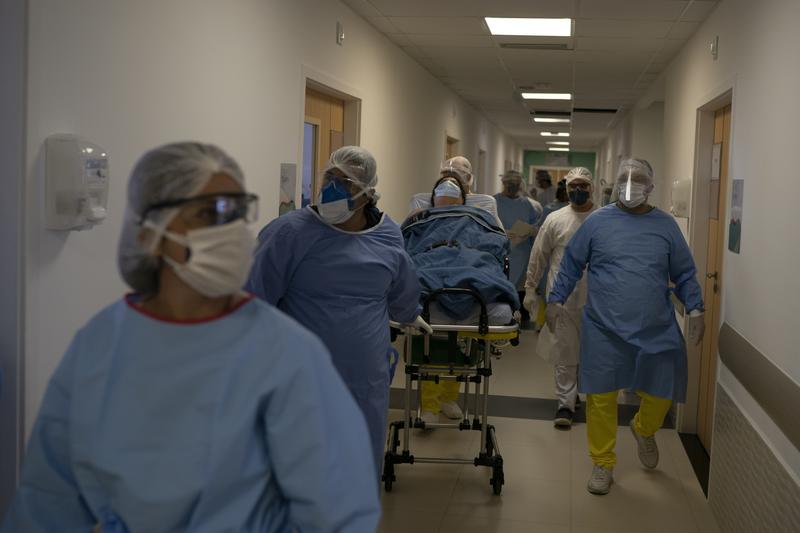 Medical workers move a patient infected with the new coronavirus to be treated at the Dr Ernesto Che Guevara hospital in Marica, Brazil, May 21, 2020. (LEO CORREA / AP)

RIO DE JANEIRO / LONDON / PARIS / MEXICO CITY / BUENOS AIRES / GENEVA / HAVANA / LIMA  / OTTAWA / BERLIN / MOSCOW — Brazil became the world No 2 hotspot for coronavirus cases on Friday, second only to the United States, after it confirmed that 330,890 people had been infected by the virus, overtaking Russia, the Health Ministry said.

Brazil registered 1,001 daily coronavirus deaths on Friday, taking total deaths to 21,048, according to the Health Ministry

Brazil registered 1,001 daily coronavirus deaths on Friday, taking total deaths to 21,048, according to the Health Ministry.

In Sao Paulo, the worst hit city, aerial video showed rows of open plots at the Formosa Cemetery as it rushed to keep up with demand.

Far-right President Jair Bolsonaro has been widely criticized for his handling of the outbreak and is at the center too of a deepening political crisis.

The former army captain has seen his poll ratings drop, hurt by his opposition to social distancing measures, support of the unproven remedy chloroquine, and tussles with experienced public health officials.

The true number of cases and deaths is likely higher than the figures suggest, as Latin America’s top economy has been slow to ramp up testing.

The outbreak is accelerating. On Monday, Brazil overtook Britain to become the country with the third highest number of infections. It surpassed Russia on Friday, but is unlikely to pass the United States soon. The world’s No 1 economy has more than 1.5 million cases.

Since the outbreak began, Bolsonaro has lost two health ministers, after pressuring them to promote the early use of anti-malarial drugs like chloroquine and hydroxychloroquine. Several high-profile public health experts have also left. Many have been replaced by soldiers.

ALSO READ: Brazil clears way for use of chloroquine to treat COVID-19

On Wednesday, Interim Health Minister Eduardo Pazuello, an active-duty army general, authorized new guidelines for the wider use of chloroquine and hydroxychloroquine in mild cases.

Britain will introduce a COVID-19 quarantine for travellers arriving from abroad from June 8, interior minister Priti Patel said on Friday, a measure that airlines have warned will devastate their industry.

All international arrivals, including returning Britons, will have to self-isolate for 14 days and provide details of where they will be staying under the plans, which were criticised by airlines, business groups and politicians alike.

Those who breach the quarantine in England could be fined 1,000 pounds (US$1,218), and spot checks would be carried out by health and border officials.

The quarantine will not apply to those arriving from the Irish Republic, or to freight drivers, medical professionals and seasonal agricultural workers. The measures will be reviewed every three weeks. 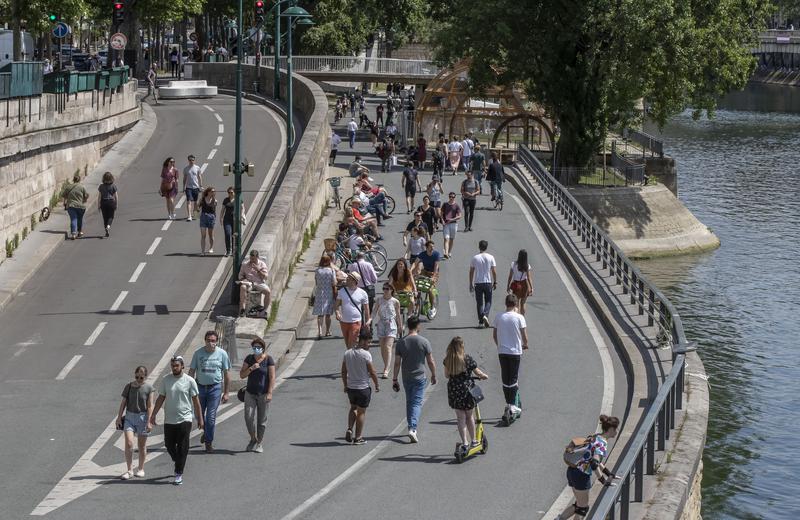 People stroll along the Seine river banks in Paris, May 21, 2020 as France gradually lifts its COVID-19 lockdown. (MICHEL EULER / AP)

France is to allow the resumption of religious gatherings after a two-month hiatus caused by the COVID-19 outbreak, but worshippers will have to wear face masks, the French interior ministry announced.

The ministry said late on Friday that it would issue a decree setting out the new rules for religious gatherings.

Under the decree, a ban on gatherings imposed in March, as part of government efforts to contain the spread of the coronavirus, would be rescinded. But collective worship would have to observe conditions, including the wearing of masks, a distance of at least one metre between worshippers and hand-washing, the ministry said in a statement.

The French government relaxed some of its lockdown restrictions earlier this month, but did not ease the ban on collective worship. That prompted complaints from faith groups, which said they were being treated unfairly.

The ministry statement said it expected worship to resume from the start of June, but that in some cases faith groups could worship together once the new rules were published, which it said would be “in the coming hours.”

The number of confirmed coronavirus cases in Germany increased by 638 to 177,850, data from the Robert Koch Institute (RKI) for infectious diseases showed on Saturday.

Russia said on Saturday that 9,434 new cases of the novel coronavirus had been reported in the last 24 hours, pushing its nationwide tally to 335,882.

The country’s coronavirus crisis response centre reported 139 new fatalities after a record of 150 deaths the day before, bringing the death toll to 3,388.

Canada will ramp up COVID-19 testing and contact tracing as it gradually lifts restrictions and is working closely with Apple Inc and Alphabet Inc’s Google on a mobile phone app to help, the prime minister said on Friday.

In his daily news conference, Prime Minister Justin Trudeau said the federal government was already helping Ontario, the most populous province, with contact tracing and was open to do the same for the other 12 provinces and territories.

With contagion slowing, provinces have been gradually reopening in recent weeks.

Mexico on Friday registered a record for coronavirus deaths on a single day, posting 479 more deaths along with 2,960 new infections, according to data from the health ministry.

Authorities have now reported 62,527 total cases of the coronavirus and 6,989 deaths since detecting the first cases in Mexico in late February.

The previous peak in fatalities was May 20, when authorities reported 424 deaths.

Argentina surpassed 10,000 confirmed cases of the coronavirus on Friday, after recording the highest single-day increase since the start of the pandemic. 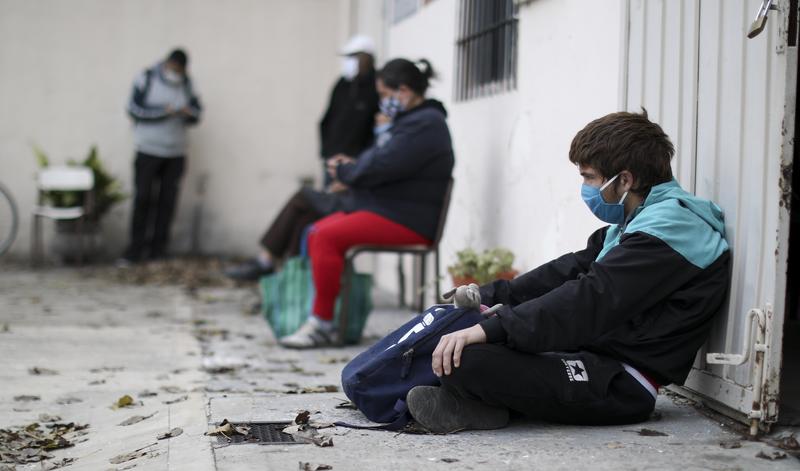 Keeping their distance from one another, people wait to receive a plate of spaghetti outside a church that works as a soup kitchen during a government-ordered lockdown to curb the spread of COVID-19 in Buenos Aires' outskirts, Argentina, May 21, 2020. (NATACHA PISARENKO / AP)

The rate of daily confirmed infections has steadily increased in the last week, though Argentina is still heavily outpaced by its regional neighbors. Brazil has the highest infection rate on the continent and became the world No.2 hotspot in terms of case numbers on Friday.

Argentina has been under a mandatory lockdown in most parts of the country since March 20 and has one of the strictest travel bans in the world, blocking the sale and purchase of flights until September.

The government extended the lockdown until May 24 for some parts of the country, while relaxing some limited restrictions on movement and businesses.

Communist-run Cuba said this week that use of two drugs produced by its biotech industry that reduce hyper-inflammation in seriously ill COVID-19 patients has sharply curbed its coronavirus-related death toll.

Health authorities have reported just two virus-related deaths over the past nine days among more than 200 active cases on the Caribbean’s largest island, a sign they may have the worst of the outbreak under control.

Official data suggests that Cuba, with universal healthcare and a well-staffed care system, has done well in containing its outbreak. It has registered less than 20 cases per day over the past week, down from a peak of 50 to 60 in mid-April. In total, Cuba has reported 1,916 cases for a population of 11 million and 81 death.

That translates to an infection rate 0.71 per 100,000 inhabitants, compared with about 29 per 100,000 for the United States, according to a John’s Hopkins University tally.

Peru on Friday extended its state of emergency and a nationwide lockdown to fight the coronavirus pandemic until the end of June, marking one of the longest periods of mandatory isolation in the world.

The Andean nation, which began the lockdown in mid-March, will have lived under it for more than 3-1/2 months by a June 30 expiration, outlasting restrictions in Italy, Spain and China, some of the hardest hit countries in the pandemic.

South America has become a new epicenter of the COVID-19 pandemic with Brazil hardest-hit, while cases are rising in some African countries that so far have a relatively low death toll, the World Health Organization (WHO) said on Friday.

“The COVID-19 pandemic today reached a milestone in Africa, with more than 100,000 confirmed cases. The virus has now spread to every country in the continent since the first case was confirmed in the region 14 weeks ago,” the WHO said in a statement, noting there were 3,100 confirmed deaths on the vast continent.

Brazil is the “most affected,” and authorities there have approved broad use of the anti-malarial drug hydroxychloroquine for treatment of COVID-19, he said. He reiterated that clinical evidence does not support the drug’s widespread use against the disease, given its risks.

Nine African countries had 50 percent rises in cases in the past week, while others have seen a decline or have stable rates, Ryan said.

The low mortality rate may be because half the continent’s population is 18 or younger, he said, while saying he remains worried the disease will spread on a continent with “significant gaps” in intensive care services, medical oxygen and ventilation.