By Xing Yi in Shanghai 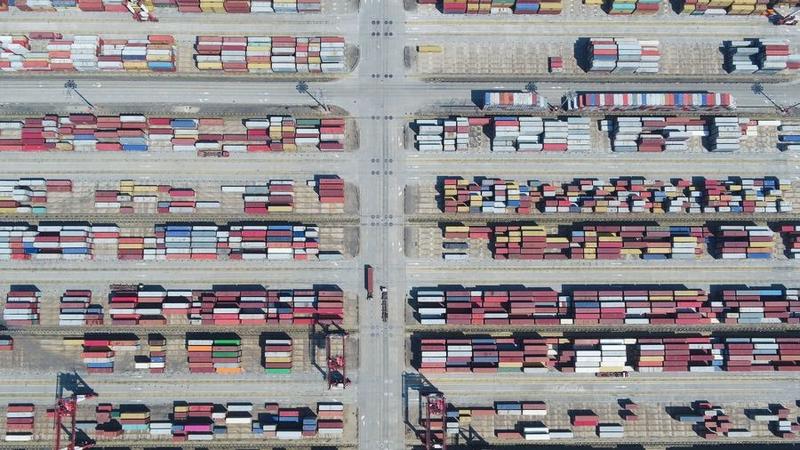 An aerial view of containers at the Yangshan Deep-Water Port in Shanghai on March 18, 2020. (PHOTO / XINHUA)

Editor's Note: With this year's two sessions underway－the annual meetings of the National People's Congress and the National Committee of the Chinese People's Political Consultative Conference－China Daily toured China to gather a series of stories focusing on the achievements and blueprints in various regions. They show how different regions find their own special strengths to achieve sustained economic development and integrated growth.

Looking at a map of China, the Yangtze River, the country's longest waterway, winds down from some of the world's highest mountain ranges on the Qinghai-Tibet Plateau to the vast eastern plains.

As the river enters the East China Sea, the Yangtze forms a delta that has become an economic powerhouse of modern China.

Roughly the size of Germany, the region encompasses Shanghai and the provinces of Jiangsu, Zhejiang and Anhui.

Home to 15 percent of the country's population, it contributes roughly a quarter of China's GDP. It also contributed more than a third of its foreign trade and investment last year, at 11.24 trillion yuan (US$1.58 trillion).

In December, the central government unveiled a grand plan for further development of the region over the next 15 years under the key concept of integration. Pushing forward with the integration of the Yangtze River Delta will help elevate the region's standing in the international economy and lead China to further participate in global cooperation and competition, according to the plan.

It is China's third national-level regional integration strategy, after the Beijing-Tianjin-Hebei development plan, proposed at the 2014 annual meeting of National People's Congress, and the framework agreement on deepening Guangdong-Hong Kong-Macao Greater Bay Area cooperation launched in 2017.

In 2018, President Xi Jinping announced the elevation of the integration of the Yangtze River Delta to a national strategy.

"It involves the interests of different parties and a variety of policies run in different cities and regions in the delta area."

Zhang's concerns were addressed by the establishment of a demonstration zone for integration projects, which was launched in November.

Spanning 2,300 square kilometers, the demonstration zone sits at the border of Shanghai and two neighboring provinces. It consists of Qingpu district in Shanghai, Wujiang district in Suzhou, Jiangsu province, and Jiashan county in Jiaxing, Zhejiang province.

The executive committee of the demonstration zone is headed by the Shanghai government's deputy secretary-general, Ma Chunlei, and operated by 35 officials from the region.

In a ceremony to mark the opening of the demonstration zone, Ma said one of the most important tasks was to ensure that institutional innovation aids integration.

A council has been put in place above the executive committee and is chaired by deputy governors from Jiangsu, Zhejiang and Anhui and a vice-mayor from Shanghai on a rotating basis. The council will help ensure provincial-level coordination.

Chen Yin, a vice-mayor of Shanghai, is the first president of the council. Senior officials, academics and business entrepreneurs who will help with planning are among its members.

Xu Lin, a council member and chair of the US-China Green Fund, said the challenge of making institutional reforms in an area as large as the Yangtze River Delta is enormous.

Council member Shen Kunrong, dean of the Business School at Nanjing University, said that integration should break administrative borders and explore coordinated governance across the region.

Urban planning for the zone is poised to become the first in China to straddle different provinces while having singular administrative and legal authority. The plan is in the final stages of development, according to the demonstration zone's executive committee.

Thirty-three infrastructure, environmental protection and public service projects are also underway with the possible participation of companies such as Huawei, Alibaba, and PricewaterhouseCoopers, the committee said.

In December, the State Council issued the outline plan for Yangtze River Delta integration, setting the development principles and targets for 2025.

By 2025, the income ratio between urban and rural residents in the center of the region should be lower than 2.2 to 1, and the urbanization rate should be 70 percent, according to the outline.

Research and development investment should constitute 3 percent of the region's total GDP and the density of the railway network should reach 507 km per 10,000 sq km. The coverage of 5G signal communication should reach 80 percent of the delta by then.

The outline became a hot topic during the annual sessions of the provincial and municipal people's congresses and political advisory bodies in January.

Last month, all three provinces and Shanghai had announced their implementation plans based on the outline, while the Ministry of Transport published its 2025 construction plans for major railways and highways in the delta.

Wang Qin, an NPC deputy from Jiangsu, told the local online media outlet Jiaohuidian he was very encouraged that the outline and implementation plan emphasized research and innovation.

Wang, also director of Jiangsu's Science and Technology Department, said he had surveyed many companies and industrial parks in the past year to gauge their experiences and look at models that could guide the building of an innovative community in the Yangtze River Delta.

He said he would urge more scientific cooperation platforms in the region and suggest Jiangsu's manufacturing sector, the province's leading industry, leverage its resources to make technological breakthroughs.

Cui Yu, an NPC deputy from Shanghai and chair of City Commercial Banks Clearing, told Jiefang Daily newspaper that she would propose changes to the interbank clearing system in the Yangtze River Delta region.

"Right now, the clearing service in different provinces doesn't have a unified system. I will suggest strengthening integration of the financial infrastructure to make payment clearing in the region work just as it does in a single city," she said.

The joint conference on the economic cooperation of 15 cities in the Yangtze River Delta is established.

The State Council issues a guideline on further promoting reform and openingup for economic and social development in the Yangtze River Delta.

State Council approves plan on the development of city clusters in the Yangtze River Delta.

Regional cooperation office of the Yangtze River Delta is established.

Integration of the Yangtze River Delta becomes a national strategy.