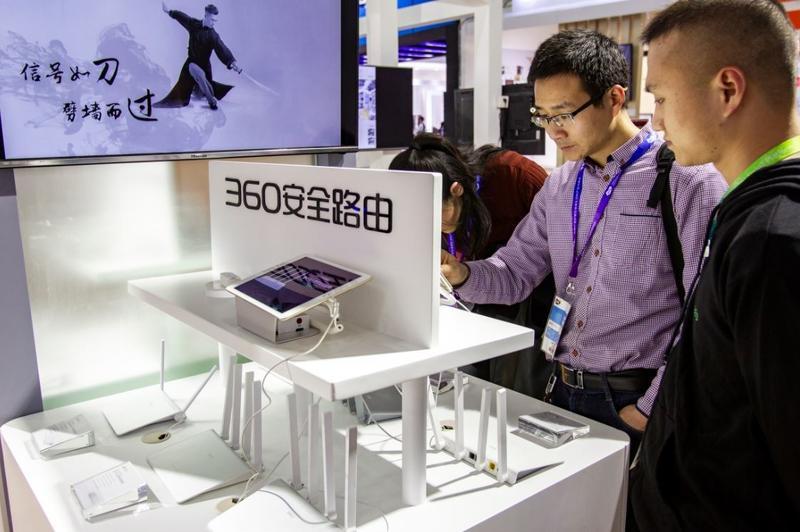 The stall of 360 Security Group during an expo in Shanghai. (PHOTO PROVIDED TO CHINA DAILY)

China should set up a cybersecurity protection system for new infrastructure, formulate a national 5G security strategy as soon as possible, and accelerate steps to ensure the security of industrial internet, said Zhou Hongyi, chairman and CEO of 360 Security Group.

In his proposal to the third session of the 13th National Committee of the Chinese People's Political Consultative Conference, Zhou, a member of the committee, said the essence of new infrastructure is digital infrastructure, and cybersecurity is one of the most important fundamental technologies for the new infrastructure.

Along with more and more digital technologies such as big data, cloud computing and the internet of things being adopted across the nation, the challenges to cybersecurity are growing, he said.

The country is speeding up the construction of new infrastructure projects such as 5G networks and data centers, and shoring up information services for the new consumption.

Zhou said the new infrastructure further expedites the connectivity and integration between cyberspace and physical space. "Cybersecurity no longer only affects the virtual space, but extends to the real world, having a serious impact on national, social and personal security."

According to a report from global market research firm International Data Corp, China will continue to lead the growth of the global cybersecurity market in the coming five years, with the market size expected to reach $17.9 billion in 2023.

The compound annual growth rate for China's cybersecurity spending from 2019 to 2023 will be 25.1 percent, compared with the global average of 9.44 percent, said the report.

In addition, as a new generation of digital infrastructure, the superfast 5G technology will bring about new cybersecurity risks, so it is imperative to strengthen the top-level design of 5G security and formulate the national 5G security strategy, Zhou said.

More efforts are also needed to cultivate leading enterprises in cybersecurity sector, expand cooperation in the 5G sector and speed up the research and formulation of 5G security standards, Zhou said.

Figures from the Ministry of Industry and Information Technology showed the coverage of 5G networks will be further expanded with more stations expected to be built nationwide by the end of this year.

Zhou said the industrial internet is one of the largest application scenarios for new infrastructure, and suggested encouraging industrial enterprises to deploy third-party cybersecurity systems and services, and promote in-depth cooperation between manufacturing and industrial firms and cybersecurity companies. He also called for ensuring the cybersecurity of innovative information technology applications.

A report released by global accounting firm PwC said emerging technologies such as AI and 5G will set higher requirements for cybersecurity.

"We are seeing that many enterprises in China, particularly tech-savvy companies, are becoming increasingly sensitive to the potential damage from cyber threats. Alert companies in China will continue to leverage cybersecurity as a competitive advantage and take preemptive action to reduce their exposure," says Lisa Li, cybersecurity and privacy partner with PwC China