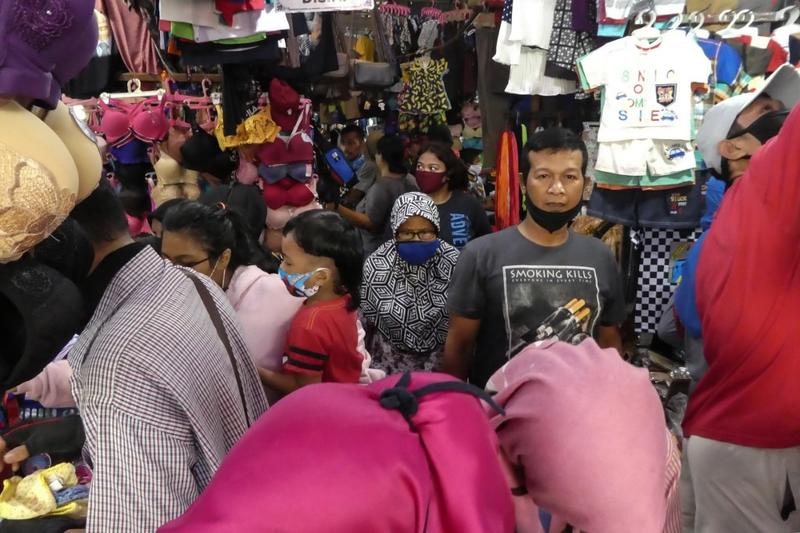 People purchase new clothes, a custom ahead of Eid al-Fitr which marks the end of the Muslim holy month of Ramadan, at a shopping centre in Jakarta on May 21, 2020. (BAY ISMOYO / AFP)

JAKARTA - Thousands of Indonesians made a late dash to leave Jakarta for their hometowns this week, even as authorities sought to stem the traditional mass exodus at the end of the Muslim fasting month to limit the spread of the coronavirus.

Indonesia announced a ban on domestic air and sea travel at the start of Ramadan to contain the outbreak but has since eased some of those restrictions, prompting confusion and criticism among civil society groups

President Joko Widodo has banned people travelling for the holiday at the end of Ramadan, but despite concern from medical experts, some people have been allowed to go if they provide proof of reasons to travel and a health certificate.

About 60 flights a day in Jakarta carrying 4,000 passengers are serving domestic destinations ahead of the Eid al-Fitr holidays starting this weekend, said Angkasa Pura, the country’s main airport operator.

“I’m going back home because my work contract is finished,” said Irawati Utami, 36, a domestic worker ahead of her flight.

Indonesia announced a ban on domestic air and sea travel at the start of Ramadan to contain the outbreak but has since eased some of those restrictions, prompting confusion and criticism among civil society groups.

Police set up checkpoints on main roads to try and prevent people from leaving the capital, the epicentre for COVID-19 in the archipelago of more than 260 million people.

Still, Central Java Governor Ganjar Pranowo said this week he expected one million people to return to his province from greater Jakarta this year, even though this was far lower than nearly 6 million in 2019.

Indonesia reported its biggest daily rise in new coronavirus infections on Wednesday and, at 1,242, has the highest death toll in East Asia outside China.

Experts worry travel for the Eid holiday could lead to new infections.

“It is very possible that people will try and go anyway. If they do, I fear that they may become sources of transmission in their hometowns,” said Panji Fortuna Hadisoemarto, an epidemiologist from Padjadjaran University.

Authorities have also had to grapple with people seeking to circumvent the ban, with media reports saying fake medical certificates allowing people to travel were being sold online.

Indonesia’s biggest Islamic group, Nahdlatul Ulama (NU), issued a fatwa this week urging Muslims to pray at home over the holidays rather than congregate in mosques.

The head of Indonesia’s COVID-19 taskforce said the next few weeks over the holiday period would be crucial for containing the outbreak in the world’s biggest Muslim-majority country.

“It’s a critical moment if we want to break the chain of transmission,” Doni Monardo told a video conference.