Raring to get back on court 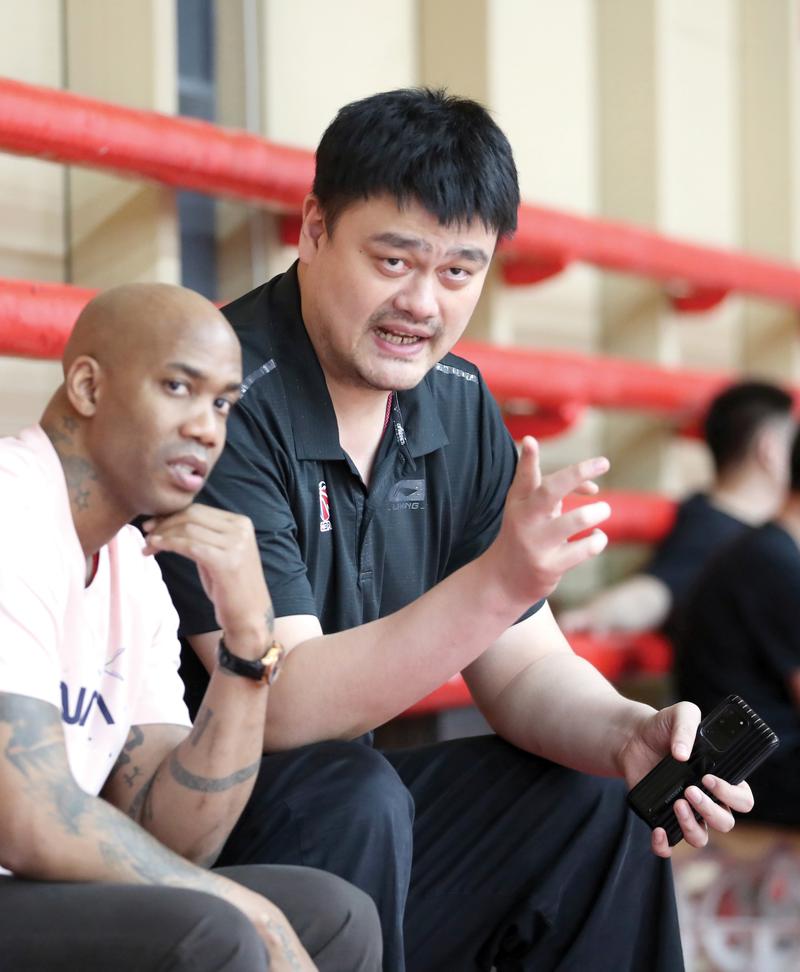 CBA chairman Yao Ming consults with Stephon Marbury, coach of the Beijing Royal Fighters, during a behind-closed-doors game between China’s national under-17 and under-18 teams on May 9 in Beijing. Yao says he is hopeful his latest plan to restart the domestic league will get the go-ahead. (PHOTO / XINHUA)

Regarded as a hero in the battle against the COVID-19 outbreak, China’s top respiratory expert Zhong Nanshan is now coming to the rescue of the Chinese Basketball Association.

After seeing earlier plans to resume league action pushed back over health fears, CBA boss Yao Ming is confident his latest restart plans can earn approval from the central government thanks to the input of Zhong and his team.

“The plan we are preparing is to keep the season as complete as possible and to play the remainder of the season at tournaments instead of the home-and-away format,” Yao told China Central Television in an interview aired on May 8.

The priority is to avoid compromising any of the country’s hard-earned success in the battle against the coronavirus, while the involvement of Zhong’s team has enhanced the plan’s feasibility, Yao added.

The league will notify clubs 21 days before the exact restart date, which has yet to be decided. All players will be tested and isolated upon their arrival in the host cities, with no fans and only essential team staff allowed at the games.

“We are very confident at the moment that we can get our league back on track,” said Yao, a former NBA All Star who was elected CBA chairman in early 2017 as the country’s first basketball chief promoted from outside government ranks.

“The improving situation regarding virus control and prevention as well as the presence of Zhong’s team have boosted our confidence for the restart.”

As head of the National Health Commission’s expert group in the fight against COVID-19, Zhong has become a household name in China for strongly advising the central government to adopt strict virus-control measures, such as the lockdown of Hubei provincial capital Wuhan — the initial epicenter of the epidemic — in late January.

Since the league came to an indefinite halt after 30 rounds of the 2019-20 regular season, the CBA has been preparing for all possible scenarios for a restart, including to complete the full schedule, to cut short the regular campaign and to jump into the postseason directly.

Yao has stressed that any adjustments to the original schedule will only be made if they are fair to all teams.

However, the country’s temporary ban on foreign nationals entering the country, imposed on March 28 to stop imported infections, poses more complex problems as far as fairness is concerned. Many clubs are still without their key foreign stars, with some players traveling back and forth to China in recent months amid the uncertainty, such as Fujian SBS guard Eugene “Pooh” Jeter.

The American rushed back to China in early March to prepare for a mooted April restart, then returned to Los Angeles after a monthlong stay in Quanzhou, where SBS is based, after learning that new resumption plans were on hold due to the government’s reluctance to ease restrictions on mass gatherings.

Despite being personally inconvenienced, the former Sacramento Kings star has been effusive in his praise for China’s anti-virus efforts.

“We don’t even know for sure if the season is going to start again in July. I’d rather, until they figure out a set schedule, just go home to be with my family and help my wife out,” father-of-two Jeter wrote in his online diary published on slamonline.com last week.

“And when it comes time for me to go back (to China), then we’ll work on that.” With the pandemic ravaging his native US, Jeter said he felt safer in China and is now raring to get back on the court.