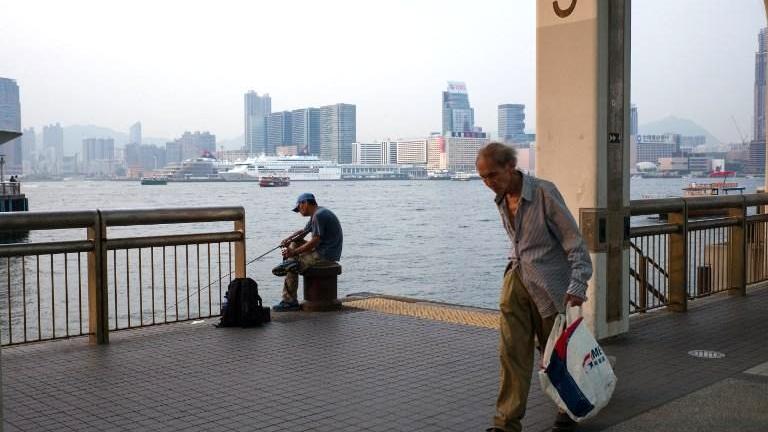 In this July 8, 2016 photo, an elderly man, right, carries a bag containing empty aluminum drink cans collected from a rubbish bin on a pier as he walks past a man fishing in Hong Kong's Victoria Harbour. (ANTHONY WALLACE / AFP)

HONG KONG -  The spike in unemployment brought about by the business slump amid the coronavirus outbreak has hit low income families particular hard.

Results of a recent survey of 364 low-income households show that the number of unemployed people from low-income families surged 400 percent to 161 from 32 in the past two months. The number of people in those families holding part-time jobs and casual jobs dropped by 38.6 percent and 47 percent, respectively, in the same period.

The four NGOs called on the government to grant a short-term unemployment allowance of HK$5,800 per month to eligible applicants to help them ride out the difficult time

Respondents who have lost their jobs said they were laid off after the Chinese Spring Festival when the businesses they worked for needed to downsize to save cost or closed down because of the epidemic.

More than 70 percent of respondents said they would have to cut their food expenses if the situation continued to worsen, while about 37 percent said they have to borrow money from relatives to make ends meet.

Some respondents said they were worried they would run out of money to pay the rents for their apartments.

The four NGOs called on the government to grant a short-term unemployment allowance of HK$5,800 per month to eligible applicants to help them ride out the difficult time.

They also urged the government should provide unemployment insurance to low-income workers and help them find temporary jobs.