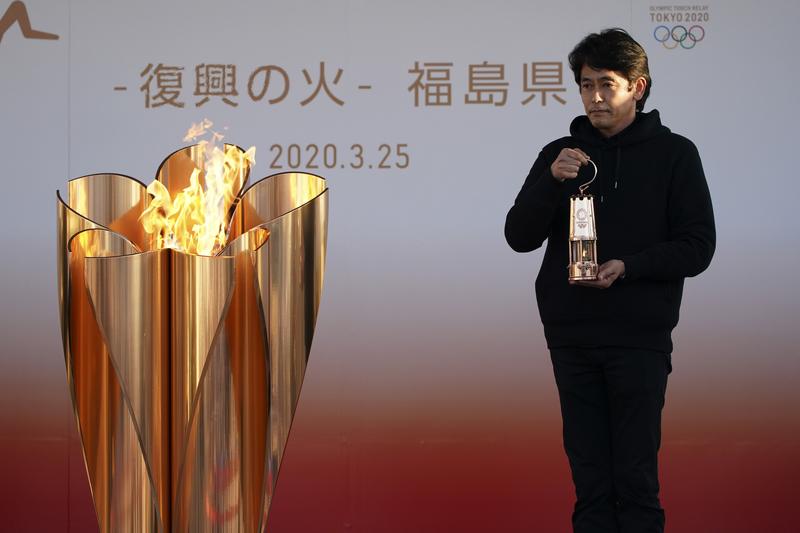 An official holds a lantern containing the Olympic Flame at the end of a flame display ceremony in Iwaki, northern Japan, March 25, 2020. (EUGENE HOSHIKO / AP)

South Korea’s football association on Thursday called on the International Olympic Committee (IOC) to raise the age limit for the Tokyo Games in 2021 to ensure those players who helped their teams qualify are still eligible to compete.

The Olympic men’s football tournament is restricted to under-23 players. For 2020, players born on or after Jan 1 1997 are eligible, while squads can also include three players over the age of 23

The Olympic men’s football tournament is restricted to under-23 players. For 2020, players born on or after Jan 1 1997 are eligible, while squads can also include three players over the age of 23.

But the decision to move the Games to next year due to the coronavirus pandemic has raised concerns that some players would miss out because they will breach the age limit.

“We’d like to ask you to take steps to ensure that players who secured the Olympic berth for their country will not be put at a disadvantage,” Yonhap quoted the KFA as saying in a letter to the IOC, FIFA and the Asian Football Confederation (AFC).

South Korea won the AFC under-23 championship in January to secure Olympic qualification, with his team relying heavily on players born in 1997.

That includes the tournament’s best player Won Du-jae and Song Bum-keun, who was named the top goalkeeper.

The Australian Olympic Committee has also said the IOC and FIFA would need to work together to iron out the qualification issues.

The KFA has also asked for squads to be expanded in line with other major tournaments hosted by the AFC and FIFA.

“Including Olympic qualifying matches, all FIFA and continental competitions are contested with 23 players per side, and only the Olympic tournament is limited to 18 players,” the KFA said.