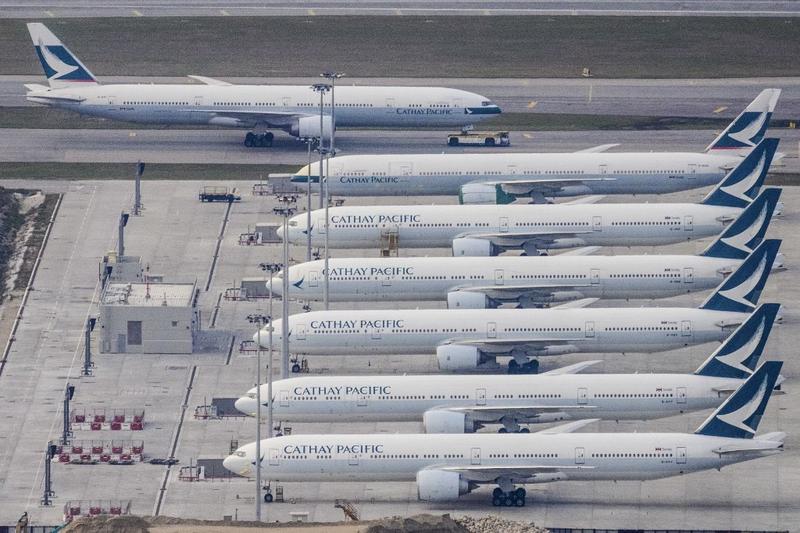 A Cathay Pacific passenger airplane Is taxied onto the runway as other aircrafts belonging to the local flagship carrier are seen parked on the tarmac at Hong Kong's Chek Lap Kok International Airport on March 10, 2020. (ANTHONY WALLACE / AFP)

Unable to fill planes with passengers as the coronavirus destroys travel demand, airlines are instead using their fleets to transport more cargo, including medicines, smartphones and Korean strawberries.

The likes of Cathay Pacific Airways Ltd, Korean Air Lines Co and American Airlines Group Inc are hauling a greater amount of goods in the belly of their passenger planes to keep up with demand. Cargo rates have risen over 10 percent in recent weeks as some companies are prepared to pay more to ship goods after drastic cuts in passenger flights left airlines with less capacity for cargo.

Airlines typically don’t operate in this fashion. Yet they are desperate to use whatever capacity they can for cargo as earnings from passenger operations have almost vanished with traffic down 90 percent. Though travel has been decimated, global trade continues, especially with factories reopening in China and demand surging for medical supplies to fight the pandemic.

At least for the short term, as long as passenger flights are disrupted, cargo operations are expected to help some airlines make up for some of the losses

ALSO READ: IATA chief calls on govts to save airlines from 'financial peril'

“At least for the short term, as long as passenger flights are disrupted, cargo operations are expected to help some airlines make up for some of the losses,” said Um Kyung-a, an analyst at Shinyoung Securities Co in Seoul. “With oil prices falling and higher rates, it’s become economical for some airlines to be using passenger planes for cargo.”

Airlines could lose US$252 billion in revenue from passenger operations this year because of the pandemic, according to the International Air Transport Association. In normal times, about half of the world’s air cargo is transported on dedicated freighters and the rest goes in the bellies of passenger aircraft along with people’s baggage. Airlines have increasingly relied on passenger planes to transport cargo since the global financial crisis.

Airlines are asking governments to ensure vital cargo supply lines remain open and efficient, calling for measures including the removal of slot restrictions and operating-hour curfews, and exempting crew who don’t interact with the public from 14-day quarantine requirements, IATA said Wednesday. “We are still seeing examples of cargo flights filled with life-saving medical supplies and equipment grounded due to cumbersome and bureaucratic processes to secure slots and operating permits,” it said in a statement.

While about 90 percent of global trade is carried by sea, air cargo transports over US$6 trillion worth of goods annually and accounts for about 35 percent of trade by value.

Airlines including Cathay and Korean Air have more exposure to airfreight operations, which account for over 20 percent of their annual revenue. While many other airlines around the world become more reliant on passenger aircraft to haul cargo, they still operate freighters. Emirates, Qatar Airways, Cathay, Korean Air and Deutsche Lufthansa AG are the world’s top five cargo airlines. 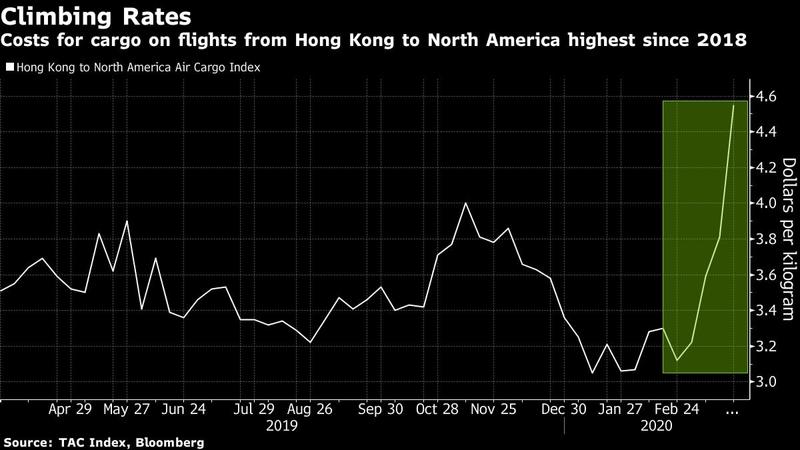 While it won’t be enough to salvage the fortunes of airlines this year, earnings from cargo operations will help them narrow losses from the collapse in passenger operations, Um said.

Some carriers such as Delta Air Lines Co, Japan Airlines Co and Air Canada don’t have freighters and have relied on passenger planes to carry cargo. That’s because many companies have been opting to move products by using less expensive modes of transport like ships.

“There’s a shortage of cargo space in the short term while demand is still there,” said James Teo, an analyst at Bloomberg Intelligence in Singapore. “Cargo yields are up double digits during this time. With passenger planes taken out, it has created a shortage of cargo capacity.”

For these flights, the belly holds of passenger aircraft are filled with items including mobile-phone parts and perishable goods in containers mounted on pallets to prevent items from shifting during flights. Usually, the cargo hull is shared with luggage from passengers. The planes will be empty of passengers and flight attendants, with only pilots in the cockpit flying the plane.

Chinese authorities warned about the implications of dwindling passenger flights on cargo shipments, saying international supply chains have been significantly affected and calling for measures to increase air-freight capacity. Chinese carriers will be helped to expand their fleets via lease or purchase, the State Council said in a statement after a meeting Tuesday.

The State Council also said mergers of air freight and logistics firms will be encouraged and express delivery companies will receive support for expansion. Where conditions allow, airports in places such as Beijing, Guangdong, Hong Kong and the Yangtze River Delta will provide around-the-clock customers clearance services, it said.

Cathay, Asia’s biggest air-freight airline, has said a third of its cargo capacity was eliminated with the passenger service halts. Typically it carries half of its cargo load on passenger planes and the rest on its freighters. Its Cathay Dragon unit is using Airbus SE A330 aircraft to send cargo to China. “While our freighter network remains intact, we are also ramping up our cargo capacity by mounting charter services and operating certain suspended passenger services purely for air freight to meet cargo customer demand,” Cathay Chief Customer and Commercial Officer Ronald Lam said on March 20. Chief Executive Officer Augustus Tang said in a memo to staff the same day that cargo capacity has been added for March and April.

Korean Air, Asia’s second-biggest cargo airline, is also deploying its A330 aircraft to Ho Chi Minh City and Qingdao to transport such products as LCD displays, ship components, mobile phone parts and Korean strawberries starting this month. Scoot is using its Boeing 787 aircraft to fly to Guangzhou and Nanjing twice a week each as charter flights for Singapore Air’s cargo operations, the budget carrier said.

In the US, American Airlines Group Inc. is shifting some of its biggest idled jets to ferry freight, its first scheduled cargo-only flights since 1984 when the airline retired the last of its freighters. The carrier will use its Boeing 777-300s to fly medical supplies, military mail, e-commerce packages and high-demand office equipment as more people work from home. The flights are between Frankfurt and Dallas-Fort Worth airports.

United Airlines Holdings Inc. is also using some of its 777 and 787 aircraft to make vital shipments, such as medical supplies, to Frankfurt from Chicago, the company said in a statement. It will initially operate 40 cargo charters a week and will continue to seek additional opportunities. Delta said it is carrying medical supplies on A350 aircraft to Dublin from Atlanta and using its 777-200LRs to fly cargo and mail overseas. Hawaiian Airlines said Wednesday it is also bolstering cargo services as it reduces its April passenger flight schedule.

Lufthansa is looking to possibly deploy A330, A350 and 747 jets as freight-only flights to help secure supplies across Europe as it had inquiries to fly medical supplies to eastern Europe, CEO Carsten Spohr said on March 20. That freight would usually travel such distances by road, but the delays at some borders with lines as long at 70 kilometers are causing problems, he said. Among the large network airlines in Europe, Lufthansa is the only one that has kept a sizable full-freighter fleet.

IAG SA’s CEO Willie Walsh said on March 16 that the company may operate some of its passenger aircraft to ensure critical supplies are transported.

The move to operate passenger planes as freighters appears to be limited to short routes for now as cargo demand for longer distances won’t generate profit for most airlines. Still, as more carriers in Europe and the US cut services and oil prices remain low, using passenger planes on longer routes could make economic sense for carriers. Fuel is one of their biggest costs.

“As more flights are cut on long-haul routes and oil prices stay where they are now, airlines could also consider using passenger planes for cargo to Europe,” Um at Shinyoung said. “While people put off any travel plans due to the coronavirus, that doesn’t mean they will stop buying. Global trade will still go on.”