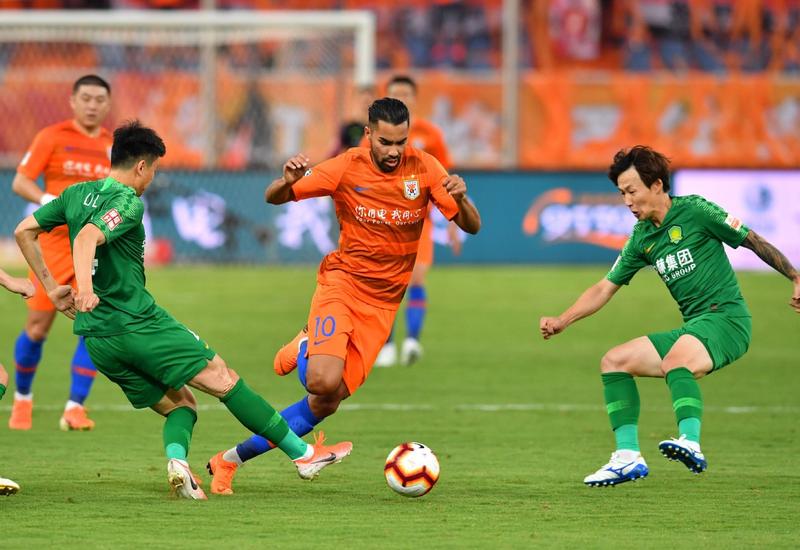 Traveling across the globe, constant rescheduling and multiple quarantine periods while worrying about loved ones back home-it's safe to say life has been more than a little stressful for Chinese Super League players in recent months.

Before the coronavirus struck, the Chinese Super League was due to kick off on Feb 22

At the beginning of the COVID-19 outbreak in January, clubs sought safe places to train abroad. However, as the epidemic became a pandemic, CSL teams began to return home.

It's still not clear when the CSL season will start but, with the spread of the coronavirus now under control in China, the priority for clubs is keeping their players as prepared as possible for kick-off.

Jiangsu Suning, which finished fourth in the CSL last term, returned to China on Feb 20 from a Dubai training camp. After a month-long break during which players self-quarantined at home, Suning reassembled its first-team squad last week.

Suning said in a Weibo post that its players will again be quarantined, at an unidentified hotel, before regrouping to start their next phase of training. The club's doctor and staff continue to monitor the players' body temperatures and keep a close eye on their physical condition.

Players are isolated in separate hotel rooms, which the club have equipped with fitness gear. Players endeavor to keep their spirits up by communicating online.

"We can video-chat while we train in our hotel rooms. That's another good way to kill time," said Suning defender Ji Xiang.

However, maintaining the self-discipline to train alone was not easy, admitted forward Huang Zichang.

"Sometimes we played games, watched TV shows and chatted with others online. So training is dependent on yourself during the quarantine," said Huang.

"So at the very beginning, it's easy to get lazy. But my teammates started to follow their own individual training schedules and then I followed suit. Once you have a clear target, you will train better with more passion and motivation.

"Actually, players should crave training. If a professional athlete stops training, his or her life stagnates. Training is a significant part of our lives."

Before the virus struck, the CSL was due to kick off on Feb 22. Exactly how the Chinese Football Association might structure the delayed campaign is unclear, however it's possible players could be faced with a busier, tightened schedule. Less recovery time between matches means extra physical strain for players.

"We will have a tougher schedule when the season starts, and our time to rest between matches is likely to be reduced," Huang added. "Players' physical strength will matter in coming games. So I'm eager to level up my body strength now.

"I want to play more games and be able to contribute from both an offensive and defensive side. I'll try my best to score more."

Defender Ji believes the season promises to also be a stern test of teams' mental fortitude.

"This is the first time in my career I've faced such a situation," said Ji. "Before, even when we were on vacation, we could still find a pitch to play on. But now we simply cannot go outdoors.

"This difficult situation is the same for all 16 CSL clubs. So now is the time to see who has the strongest willpower. I believe that our team won't be beaten by any other in terms of our determination."

The prolonged offseason has been even more of a slog for Wuhan Zall.

Stuck in Spain since January due to the lockdown of Wuhan, the epicenter of the outbreak in China, the team finally touched down on Chinese soil again on March 16.

From Beijing, the squad flew to Shenzhen, Guangdong province, with training set to resume upon the completion of a 14-day quarantine period.

"It was an unforgettable and tough journey… During the 44-day training stint in Spain, many of our players were worrying about their family's safety and health back home," read a Wuhan Zall statement.

READ MORE: Wuhan Zall side put under quarantine on return to China

"They contacted their families each day after training. The coaches kept a close eye on each player, and they've had psychological counseling to help ease the stress they've been under and keep them positive.

"After the quarantine in Shen zhen, Wuhan Zall will start the next phase of training. Thanks for all the support and now we will train hard as we await the start of the next CSL season."