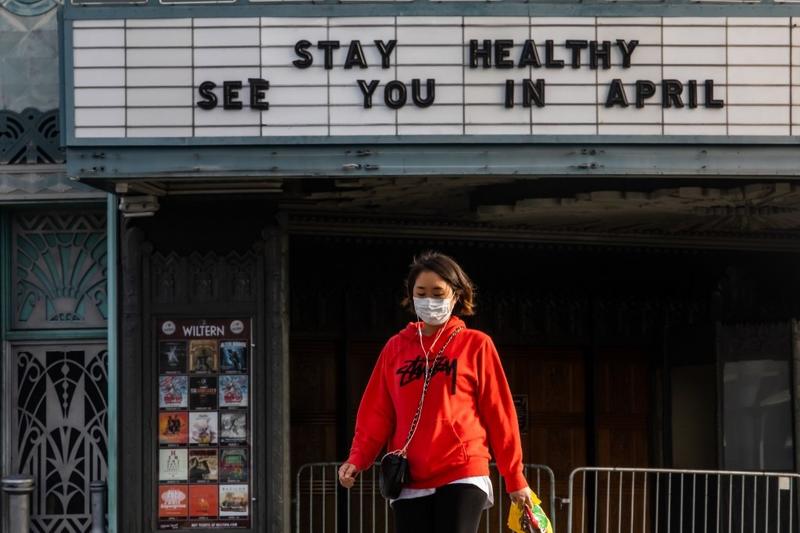 A woman wearing a face mask walks in front of a closed theater in Koreatown, Los Angeles, on March 21, 2020. (APU GOMES / AFP)

A new center for Asian Americans to report offensive behavior, including assaults, related to the novel coronavirus outbreak has received more than 500 submissions within four days, offering a glimpse into the extent of racism and bigotry affecting the community.

"We now have over 500 incident reports. They have been provided in English, simplified and traditional Chinese, Thai, Japanese and Korean. Just today, we added Vietnamese," said Manjusha Kulkarni, executive director of the Asian Pacific Policy and Planning Council, or A3PCON.

We now have over 500 incident reports. They have been provided in English, simplified and traditional Chinese, Thai, Japanese and Korean. Just today, we added Vietnamese.

The Los Angeles-based community group and the San Francisco-based advocacy organization Chinese for Affirmative Action opened the reporting center on Thursday to allow Asian Americans and Pacific Islanders to report incidents of hate, which have been surging as the COVID-19 pandemic spreads.

Half of the cases are from outside California, ranging from shunning to verbal harassment, according to Kulkarni.

"Some of the more shocking ones are where somebody is throwing a bottle at someone. It looks like just in the last few hours we've gotten a case where somebody in New York was punched by another individual, so actually physically beaten," she said.

The cases will be used for assistance, advocacy and education purposes, she said.

Some US officials and lawmakers have repeatedly used the term "Chinese virus" or "Wuhan virus", even though the World Health Organization has a naming rule that prohibits linking a virus to a particular geographic location or group of people to avoid stigma.

READ MORE: US' virus stigmatization against China is xenophobic, unhelpful

As the terminology can falsely associate Asian Americans with the disease, Kulkarni said the labeling is putting people in harm's way.

While trying to stay safe and healthy, as other US citizens are doing, Asian Americans and Pacific Islanders are facing increasing anxieties and fears whenever they leave their homes to go to the grocery store, the pharmacy or even just to get outside for a walk, she said.

"This is a time that we need to come together to help each other out," Kulkarni said.

David Bernstein, president and CEO of the Jewish Council for Public Affairs, also opposed the use of what he called "this unfortunate term".

"We worry both about the breakdown in international cooperation, at a time when we need it the most, and the impact it will have on vulnerable populations here in the US."

On Monday, US President Donald Trump tweeted: "It is very important that we totally protect our Asian American community in the United States, and all around the world.

Kulkarni said she was glad to see the shift in the president's message, "though we are concerned that significant damage was already done".

"We hope this is not a temporary change, as some other more measured comments and corrections have been in the past," she said.