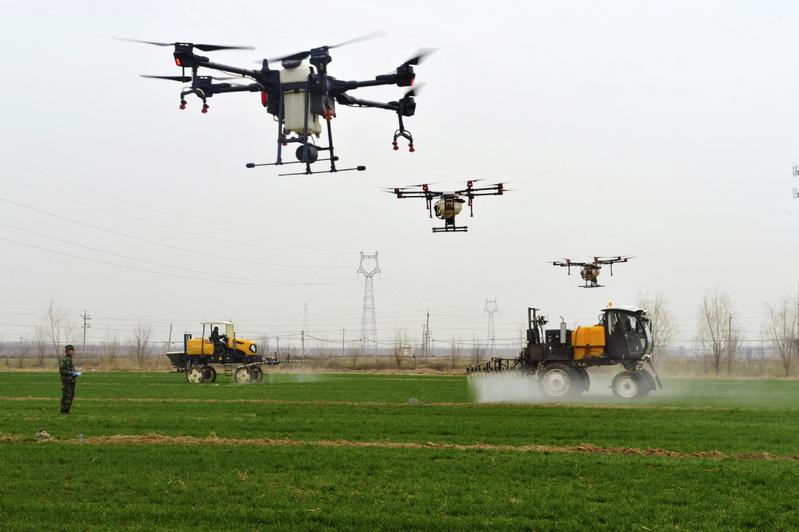 Drones and automatic spraying machines, controlled by technicians, spray pesticides and herbicides in a village in Hebei province in March, 2020. During the coronavirus outbreak, modern technologies have been adopted to ease a labor shortage. (PHOTO / XINHUA)

Farmers nationwide are losing no time in getting the spring farming season underway to ensure a good harvest as China continues to battle the coronavirus outbreak.

The season usually begins after lichun, the official start of spring and the first of 24 solar terms in the traditional lunar calendar, which sees temperatures rising. This year, lichun started on Feb 4 and ended on Feb 18.

The actual start of the season－which includes planting, fertilizing, weeding, and spraying pesticides and herbicides－varies across the country in line with different environments and conditions.

This year, virus prevention and control measures have seen most villagers staying at home, resulting in widespread use of machinery and online service platforms to ease the labor shortage

Spring farming plays a significant role in ensuring a bumper harvest, which is essential for guaranteeing farmers' incomes.

This year, virus prevention and control measures have seen most villagers staying at home, resulting in widespread use of machinery and online service platforms to ease the labor shortage.

Drones and automatic spraying machines are now commonly used to spray pesticides and herbicides, said Yu Xingming, a farmer in Yixiu district, Anqing, in the eastern province of Anhui.

The 48-year-old is head of an agricultural machinery cooperative, which owns 200 large and medium-sized machines that have been used on more than 333 hectares so far.

Yu, who has been farming for more than a decade, is a skilled drone operator, and this year, he has been using the machines to spray pesticides on rapeseed.

"Before, we sprayed pesticides manually, but each person could only spray about 1 hectare per day. Now, a drone carrying 20 kilograms of pesticide can spray about 13.3 hectares a day, saving a lot of time and labor," he said.

"The epidemic hasn't affected my spring farming plans too much. At present, the weather is fine, so it's a good time to start work."

Last year, the cooperative used agricultural machinery to service more than 666 hectares, but the figure is expected to rise to 1,333 hectares this year, Yu said.

Machinery is changing traditional farming methods, and gradually replacing cattle-drawn plows and manual spraying of pesticides. It is also playing an important role in fighting the epidemic, as drones and automatic sprayers have been used to spray disinfectants across large areas of countryside, Yu said. 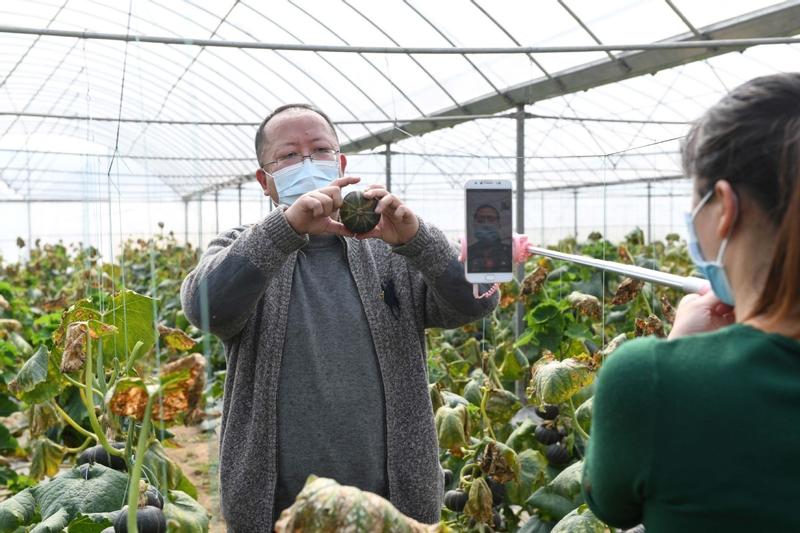 A vegetable expert in Yichun, Jiangxi province, uses an internet lecture to show farmers how to cultivate pumpkins and control pests in February, 2020. (PHOTO / XINHUA)

He finished pre-seeding work early this month, planting the seeds in temporary containers. While the crop is growing well, the land is still not ready for the seedlings to be transplanted, which is stressful.

"Early rice needs to be planted in late March or early April. If not, the seeds will be too old and that will affect later growth and yield," the 53-year-old said.

Many farmers have already started planting, so they have ordered drones and other machines from rental companies, resulting in a shortage of equipment. In recent days, Xie and his peers have called many companies to check the availability of machinery.

Xie said he has not used cattle-drawn plows for several years, because traditional methods are time-consuming and tiring.

"Plowing used to take three or four days, but with a machine, I can finish the work in a single day," he said.

In addition to technology, online services and e-commerce platforms that sell agricultural materials are helping farmers beat the labor shortage.

To prevent large gatherings, agricultural experts are providing online lessons in which they demonstrate how to solve problems in production, raising animals and orchard management. The experts use a number of mobile broadcast platforms that allow farmers to watch demonstrations of agricultural technology, listen to interpretations of policy and ask questions from their homes.

When she gets home from work every day, Zhang presents a one-hour live broadcast on the Kuaishou platform and answers questions.

"It's time to start spring farming. In previous years, we would have arranged for technicians to go to the countryside to conduct technical training and give lectures to farmers. The epidemic means we can't provide large-scale training offline this year, so I decided to use the online broadcast, which is safe and convenient," she said.

So far, live broadcasts and WeChat groups hosted by more than 90 technical instructors have helped 540 households in the area prepare for the spring farming season.

Zhang Jinyi, who grows grain in Jiangxi province, was worried that he would have to delay plowing this year, because he was unable to buy materials at the market.

"In late February, I called several merchants to purchase fertilizer and seeds, but they told me the factories hadn't resumed production and they didn't have sufficient inventory. I was quite unsettled," said the 54-year-old, who farms 3 hectares of rice and rapeseed.

"Earlier this month, as the situation began to improve, I noticed that many factories were resuming production. I learned to purchase such materials online, and that made the preparation work much easier. After a few clicks, I had obtained enough chemical fertilizers and seeds."

On March 2, the leading group of the Communist Party of China Central Committee on the Prevention and Control of the Novel Coronavirus Outbreak issued a guideline on coordinating control measures and spring farming preparations to ensure production is stable.

The document required all provincial-level regions to keep their cultivated areas and grain output stable, with last year's registered harvest providing a benchmark. The regions were also ordered to implement support policies for farmers.

As of Sunday, 88 percent of businesses that provide key agricultural materials were operating normally, while 90 percent of agricultural stores had reopened and 92 percent of rural roads nationwide were free of barriers, meaning supplies can reach regular levels, according to Xie Yan, an inspector with the Seed Management Department at the Ministry of Agriculture and Rural Affairs.

Less than 5 percent of the 1,200 agricultural counties nationwide have reported shortages of materials, Xie Yan said.

On March 5, Zhang Yanqiu, head of the department, told a media briefing in Beijing that in normal times, the supply of seeds, fertilizers and pesticides exceeds national demand during the spring farming period, but this year, the supply chain has been affected by the restricted cross-regional transportation as a result of the virus,

Meanwhile, on Sunday, Wang Xiuchun, deputy director of the Ministry of Transport's Service Department, said to ensure open transport channels for spring farming materials, the ministry has ordered authorities nationwide to exempt vehicles carrying agricultural produce and machinery from road tolls. Such vehicles are also allowed to use the "green channel", a fast lane for emergency traffic, while epidemic prevention and control measures remain in force.

The ministry has also established a Logistics Guarantee Office to oversee national demand for transportation 24 hours a day, undertake overall planning and dispatch key materials and workers to ensure the continuation of spring farming work, she added.