Russian authorities lifted a tsunami warning in the Pacific far east on Wednesday after a 7.5 magnitude earthquake struck off the coast of the Kuril Islands, the RIA news agency reported, citing a representative of the Sakhalin Tsunami Centre.

Residents in the town of Severo-Kurilsk in Russia’s Sakhalin region had earlier been evacuated to a safe zone on higher ground, emergency services said, adding that a wave of about 50 cm (20 inches) had reached the shores. 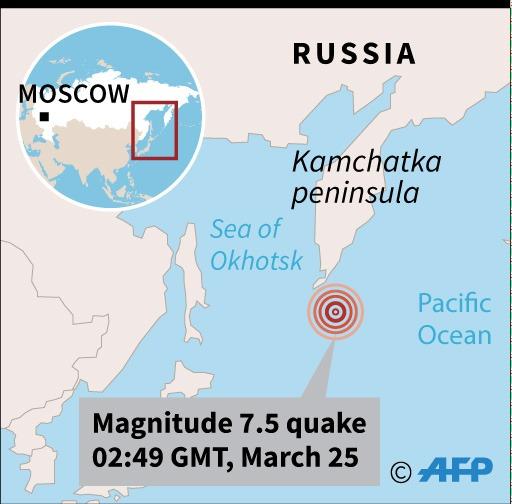 Meteorological authorities in Japan issued no tsunami alerts, while US authorities canceled a warning for Hawaii

Emergency services reported small waves and no casualties or damage after the earthquake. The sparsely populated Kuril Islands run from Russia’s Kamchatka peninsula to Japan’s Hokkaido island, and include four disputed islands, known as the Southern Kurils in Russia and the Northern Territories in Japan.

“At 1757 local time (0657 GMT), the threat was removed,” said the Sakhalin Tsunami Centre representative. “Since the tsunami was small, but was observed against the backdrop of the tide and a storm, we maintained the warning for several hours.”

Meteorological authorities in Japan issued no tsunami alerts, while US authorities canceled a warning for Hawaii.

The US Pacific Tsunami Warning Center said the US West Coast, Alaska and Canada’s British Columbia faced no tsunami danger from the quake, though some US coastal areas may experience non-damaging sea level changes.

The Japan Meteorological Association also said there might be slight tidal changes but said no warnings or even watch advisories had been issued.

The earthquake, 218 km (135 miles) south-southeast of the town of Severo-Kurilsk, struck at a depth of 56.7 km (35 miles), the US Geological Survey (USGS) said. The USGS had initially said the quake measured 7.8, but revised that figure down to 7.5.

There were no immediate reports of damage or casualties.