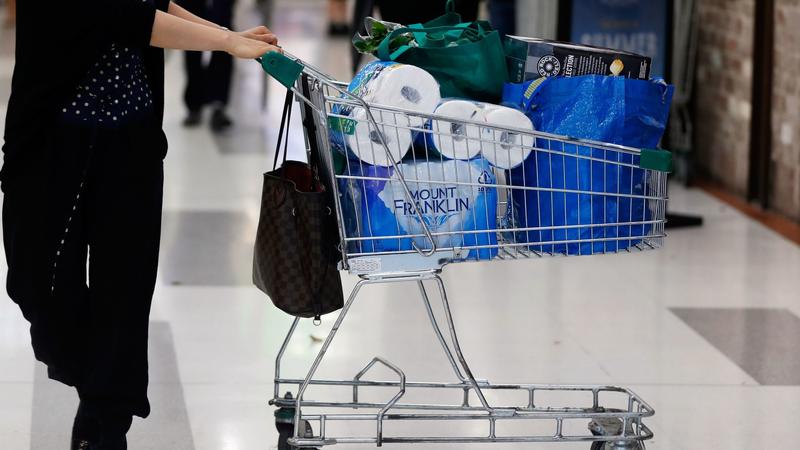 A customer pushes a shopping cart containing toilet paper at a supermarket in Sydney, Australia on March 4, 2020. (BRENDON THORNE / BLOOMBERG)

CANBERRA — As Australian people in several cities rushed to supermarkets to buy toilet paper, an Australian newspaper offers them another choice.

On Thursday, the NT News, which was based in Darwin of the Northern Territory, printed an eight-page insert which can be cut and used as toilet paper.

On its Twitter account, NT News posted a 24-second video footage showing the pages, saying "Yes, we actually did print it."

The announcement followed a post on Wednesday, in which it said "we are printing a special 8-page liftout of toilet newspaper tomorrow in case you can't find any at the shops".

Humans struggle with nuance and unclear outcomes and research shows that when people feel like they have lost control, they tend to be drawn to small things that they can control

The pages, with the width of about two toilet paper rolls, could be torn up from the middle.

According to Guardian Australia, editor of the newspaper Matt Williams said the paper was selling well. "We are a newspaper known around the world who understands the needs of our readers," he said.

The move came after a frenzy of toilet paper stockpiling in Australia sparked by people's worries about coronavirus.

Xinhua reporter found piles of toilet papers with different brands in the Aldi supermarket in Canberra Center on Tuesday afternoon. On Thursday morning, however, the shelves were almost empty.

In Costco of Canberra as well as some Woolworths and Coles situation is similar. Toilet paper and facial tissue could be found in many customers' trolleys.

"The vast majority of products in our range remain available and we are working hard with our suppliers to ramp up production and deliveries to restock shelves as soon as possible," said Woolworths on Twitter.

In a report by news.com.au, a human behavior expert at Deakin University, Paul Harrison, said, "Coronavirus is an abstract problem, with an unclear effect and it's unfolding minute-by-minute."

"Humans struggle with nuance and unclear outcomes and research shows that when people feel like they have lost control, they tend to be drawn to small things that they can control," he said.