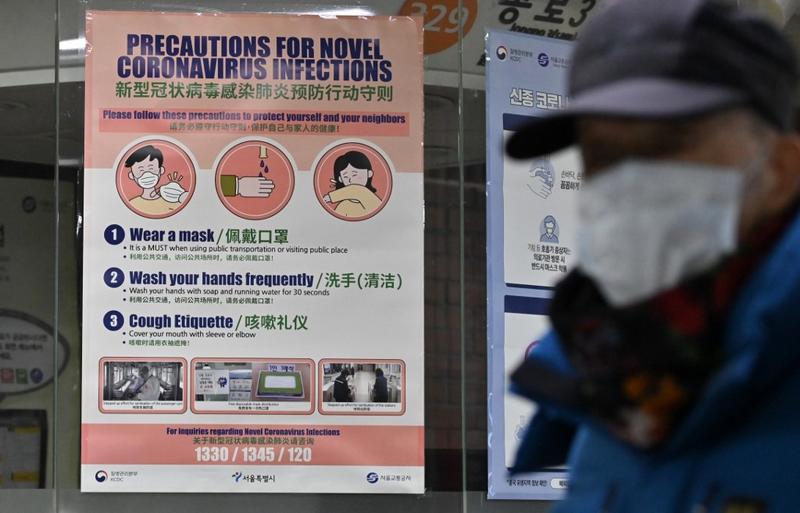 A man wearing a face mask walks past a poster about precautions against the the novel coronavirus, at a subway station in Seoul on Feb 10, 2020. (JUNG YEON-JE / AFP)

Confirmed coronavirus infections in South Korea nearly doubled in 24 hours with health officials adding another 100 cases, the bulk of them stemming from a religious sect in Daegu.

The country’s Centers for Disease Control and Prevention said Friday that the total number of coronavirus infections rose to 204, with the city of Daegu accounting for most of the new cases. The city of about 2.5 million people has become a something of a ghost town with numerous public facilities closed and many residents staying indoors.

President Moon Jae-in, who held a round table discussion with small businesses Friday, called the spread of the virus “very grave” and said South Korea would “fully mobilize” financial and budgetary measures to help the economy weather the impact of the outbreak

Of the new infections reported Friday, 85 were tied to the Temple of the Tabernacle of the Testimony, formerly known as Shincheonji Church of Jesus based in Daegu, CDC said. In all, 122 cases involve those who may have attended church services with a person who was confirmed with the virus earlier this week. A pastor told JoongAng Ilbo newspaper in an interview that some 1,000 people attended services in which the 61-year-old coronavirus patient was also in attendance.

The outbreak in Daegu, about 235 kilometers south of Seoul, has renewed concerns about the virus after a lull in reported cases last week. Earlier this week, there were 31 confirmed cases in South Korea.

President Moon Jae-in, who held a round table discussion with small businesses Friday, called the spread of the virus “very grave” and said South Korea would “fully mobilize” financial and budgetary measures to help the economy weather the impact of the outbreak. Moon, earlier this week, warned that the effects from the virus on the economy could be bigger and longer-lasting than the 2015 MERS epidemic that killed 38 people in South Korea.

Health officials, meanwhile, did not raise the alert level, saying that the current status of the outbreak was “manageable.”

In Seoul, the city’s mayor said he would close all of the church’s facilities located in the capital, Yonhap News reported.