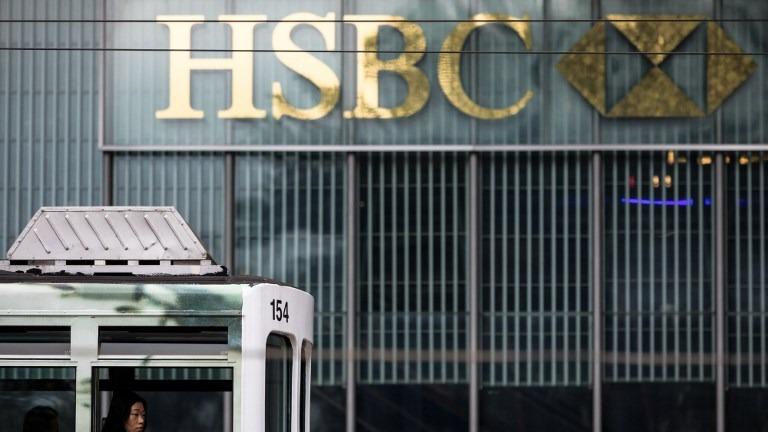 This May 4, 2017 photo shows a tram passing by the HSBC banking headquarters in Hong Kong. (DALE DE LA REY / AFP)

HSBC Holdings Plc and Royal Dutch Shell Plc are sending staff home in Hong Kong and Singapore after contact with people infected by the coronavirus, adding to concerns the disease will spread more broadly across the two Asian financial hubs.

HSBC, which employs 21,000 people in Hong Kong, on Friday revealed one of its employees has been placed under government quarantine after “close contact” with relatives diagnosed with the coronavirus. The bank is contacting staff who may have recently come in close contact with the individual, and will advise them to observe 14-day self-care at home, according to a memo sent to staff, which was confirmed by a Hong Kong-based spokeswoman.

“All employees have been reminded to be mindful of hygiene procedures and to stay at home or see a doctor if they feel unwell in any way,” the spokeswoman said. “HSBC will continue to closely monitor the development of the case and stay in close contact with health authorities.”

Oil giant Shell sent some staff from its trading desks in Singapore home after an employee was found to have had contact with a coronavirus case, according to people familiar with the matter. Part of the company’s trading desks were already working remotely as part of a contingency plan, but now all will need to work from home.

Companies in Hong Kong and Singapore have begun taking heightened cautionary measures from closing bank branches, to temperature checks and to having employees work from home or alternative sites as well as self-quarantining to protect staff. Recessions are now threatening the two financial hubs, which have seen the largest number of confirmed cases outside the Chinese mainland, excluding an outbreak on a cruise ship quarantined in Yokohama, Japan.

The HSBC employee has been under self-care since Wednesday after appearing at the bank’s main office in central Hong Kong for three days from the end of January. The person also visited another office in Tseung Kwan O, an area in eastern Hong Kong, earlier this month and took a shuttle bus from Taikoo to Tseung Kwan O.

Other companies in Singapore’s business district have confirmed at least three infections, one of which caused DBS Group Holdings Ltd to ask staff on Level 43 of its Marina Bay Financial Centre Tower 3 headquarters to work from home.

Recession could be a possibility in Singapore as the country battles the coronavirus outbreak, the Straits Times reported, citing comments from Prime Minister Lee Hsien Loong.

Japan’s Mitsubishi UFJ Financial Group Inc also quarantined an employee at home in Hong Kong after a family member was suspected of being infected, Bloomberg reported on Thursday. The employee, who works at the Quarry Bay office, is not infected. As a precautionary measure, other colleagues in the same office were also quarantined until further notice, according to a memo seen by Bloomberg.

Along with other banks, HSBC is rolling out relief measures to help Hong Kong people cope with the virus outbreak that is weighing on the city’s retail and tourism industries. Europe’s biggest finance company by market value said on Sunday it’s providing more than HK$30 billion (US$3.9 billion) in liquidity relief to its business customers and announced other measures Thursday to ease the financial burden on personal customers.