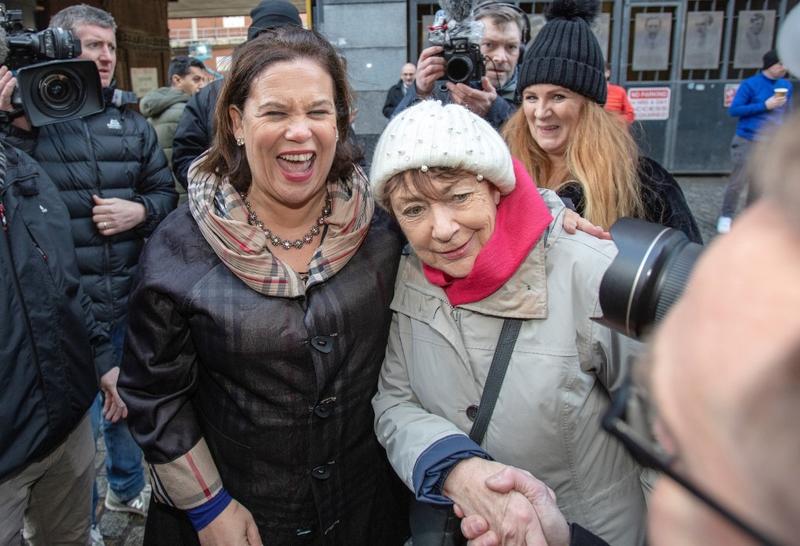 Irish republican Sinn Fein party leader Mary Lou McDonald reacts as she meets members of the public during a walkabout in the centre of Dublin, Ireland on Feb 10, 2020. Mary Lou McDonald's leadership has transformed Sinn Fein into a party deemed worthy of power in Ireland, rather than merely the political voice of the IRA. Under her direction, Sinn Fein topped the first preference votes in Ireland's general election on 24.5 percent -- a 10.7 percentage point boost from the leftist party's showing in 2016. (PAUL FAITH / AFP)

The request puts pressure on Fianna Fail leader Micheal Martin, whose party has 38 seats in the 160-seat parliament, to clarify his position on a possible tie-up with Sinn Fein, which has 37 seats.

Sinn Fein, Fianna Fail and the centre-right Fine Gael Party of Prime Minister Leo Varadkar secured just under a quarter of seats in parliament each, meaning it will be hard to form a government unless at least two of the three cooperate.

Micheal Martin has said ‘I am a democrat, I listen to the people and I respect the decision of the people’, so he knows that the people have voted for change

“Micheal Martin has said ‘I am a democrat, I listen to the people and I respect the decision of the people’, so he knows that the people have voted for change,” Sinn Fein leader Mary Lou McDonald said in a statement to announce that the formal request had been made.

“There is an obligation on all of us to act urgently,” she added.

During the election campaign, Martin ruled out doing a deal with Sinn Fein, the former political wing of the Irish Republican Army (IRA), but in the immediate aftermath of the vote, he refused to exclude the possibility.

Fianna Fail lawmakers were due to discuss the issue on Thursday. The Irish Times newspaper said Martin was expected to rule out such a coalition.

Fianna Fail and Fine Gael have dominated Irish politics since it broke from British rule nearly a century ago.

They have long shunned Sinn Fein, citing policy differences and the party’s historic links to the IRA, which fought British rule in Northern Ireland for decades in a conflict in which some 3,600 people were killed before a 1998 peace deal.

Fine Gael has ruled out doing a deal with Sinn Fein and has been reluctant to form a coalition with historic rival Fianna Fail. But on Wednesday Varadkar said he would be willing to help form a government if Sinn Fein fails to do so.