By Sun Ruisheng in Taiyuan and Zhao Yimeng in Beijing 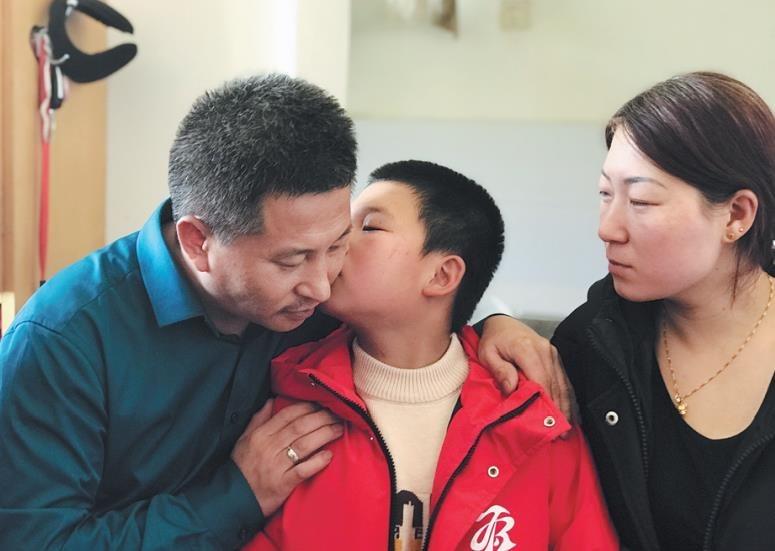 Liu Jingjun is surrounded by his father Liu Liqin and his mother at their home in Taiyuan, Shanxi province. (YANG ZHOUFEN / CHINA DAILY)

This Spring Festival Liu Liqin finally got the chance to hand a red envelope stuffed with 3,000 yuan (US$434) to his 12-year-old son who was abducted 10 years ago.

I hope those who haven’t found their children can be encouraged by my story so we can fight to get their families back together.”

Last month Liu, 40, and police rescued Liu Jingjun after the father spent a decade looking for the boy, along the way overcoming fraudsters, failures and financial problems.

On a Sunday morning in April, 2010, 2-year-old Liu Jingjun was playing with his big sister outside their house in Taiyuan, Shanxi province. His sister went inside to grab a snack, but when she came out her brother was gone.

"The surveillance camera of the hotel beside my apartment showed that a man picked up my son at 10:59 am that day, but we couldn't recognize his face due to the blurred image," Liu Liqin said. "There were no clues at all. I fainted and when I regained consciousness I called the police."

ALSO READ: Local heroes help in the battle against epidemic

Liu Liqin began the search for his son with the help of a support group for families of missing or abducted children.

Liu Yongfei, another father whose son disappeared, told Xinhua News Agency "at first we shared information on a platform called Baby Come Home, then the families with close connections formed a group offline to help each other."

The group now has hundreds of families including dozens in Shanxi, according to Liu Yongfei.

Shi Richeng, who also lost a child, and Liu Liqin became the main force behind the group. They drove to many provinces with printed information about the lost children, often handing out fliers in train stations with their details.

Despite his dedication to the group, Liu Liqin was having little success in finding his son.

Liu Liqin met more than 30 children and went through nearly 10 DNA tests without a positive result.

"We visited some kids by following the clues, but they all failed the DNA tests. None of them were my son," he said.

However, he saved the DNA results in the hope they might help other parents find their children. Over the years, seven families have found their children with the help of Liu Liqin and the group.

"I have been deceived by fraudsters and lost tens of thousands of yuan in the process, but I didn't ignore any tips that might lead to my son," he said.

Liu Liqin worked in the home renovation industry in Taiyuan before his son went missing.

However, the search for his son ate away the family's savings.

"I had to take out an overdraft for my daily expenses via several credit cards," he said.

To complicate matters, the village the boy was abducted from was demolished for reconstruction work to go ahead.

Liu Liqin rented a house near the old village in case his son found his way home. The family still lives there.

On the wall hangs a family photo, which shows Liu Liqin and his wife embracing their daughter and son who are both wearing red traditional Chinese garments. "Less than a month after we took that photo my son was abducted," Liu Liqin recalled.

In May 2018, Liu Liqin opened an account on the Kuaishou shortvideo and livestreaming platform. He released videos of his searches for the missing children in the hope that they would generate tips from viewers on their whereabouts.

"Please help me and forward information on our kids. You are lucky to have your kids around while we don't," Liu Liqin said in a livestream, while also warning parents to keep an eye on their children.

In July, one anonymous viewer sent a private message to Liu Liqin saying that his son might be in Jiaocheng county in Shanxi. However, he didn't take the message seriously as he did not believe it was a credible one.

Five months later, the anonymous viewer sent Liu Liqin another message asking him why he hadn't followed up the tip. This time, the viewer also gave details of the address.

In December, Liu Liqin visited the home in Jiaocheng and loitered in the area.

"We took a blurry photo of the kid－he looked identical," he said, adding that he had high hopes it was his son.

He later sent his younger brother, Liu Lilong, to get a clearer image of the boy as he did not want to arouse suspicion around himself. The image was run through an AI program of an online platform for finding missing children. The result showed a 67 percent match to a young Liu Jingjun and the platform recommended a DNA test of the boy.

Liu Liqin's brother and other family members went to the county, approached Liu Jingjun, and managed to get strands of his hair for testing.

The DNA results came back positive. On the night of Jan 2, Liu Liqin and local police retrieved the boy from the home. A man surnamed Zhang told police he paid 25,000 yuan to buy Liu Jingjun from a human trafficker 10 years ago.

Zhang was under criminal detention late last month, and the human trafficker was arrested by the police, Xinhua reported.

On Jan 10, Liu Liqin invited members of the media to celebrate a birthday party he held for Liu Jingjun in Taiyuan. Many families who are still searching for their children also attended, and said they had renewed hope after witnessing Liu Liqin's successful search for his son.

Since they reunited, Liu Liqin has been rebuilding his relationship with Liu Jingjun.

"My journey to find my son has ended, but I'm still doing volunteer work to help families become reunited. I hope those who haven't found their children can be encouraged by my story so we can fight to get their families back together," Liu said in a post on WeChat.