US confirms 14th case of coronavirus in San Diego 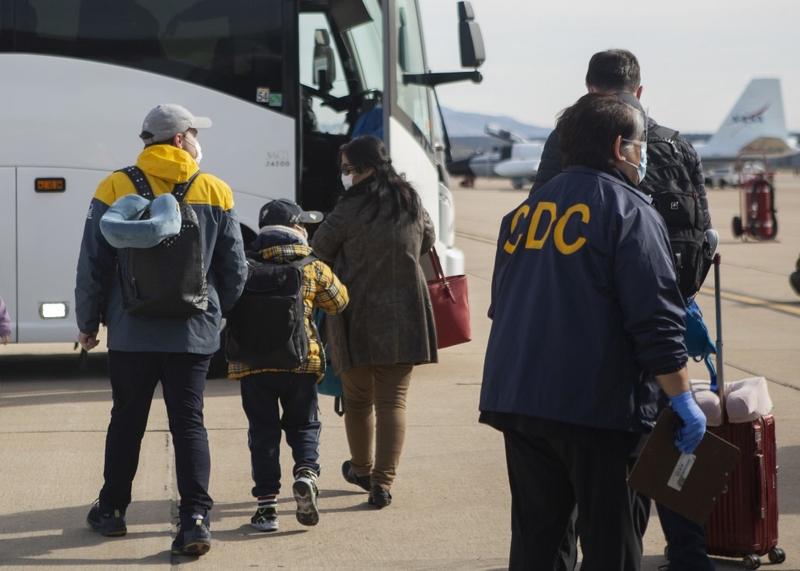 This handout photo released by the US Marine Corps shows evacuees from China arriving at Marine Corps Air Station (MCAS) Miramar, in San Diego, California, on Feb 5, 2020. MCAS Miramar worked with the Center for Disease Control (CDC) and Health and Human Services (HHS) for the quarantine of travelers evacuating from China and the Coronavirus outbreak. (KRYSTEN HOUK / US MARINE CORPS / AFP)

LOS ANGELES — A second person evacuated from Wuhan, China, to a US Marine base near San Diego has been diagnosed with the new coronavirus, raising the tally of confirmed cases in the United States to 14, the Centers for Disease Control and Prevention (CDC) reported on Wednesday.

The patient was among 232 individuals placed under quarantine at the Marine Corps Air Station Miramar after being airlifted from the epicenter of the coronavirus outbreak in Wuhan earlier this month, CDC spokeswoman Ana Toro said.

A previous case of coronavirus was documented on Monday among the same group of evacuees, the CDC said

A previous case of coronavirus was documented on Monday among the same group of evacuees, the CDC said.

CDC officials said it appeared the two San Diego patients were separately exposed to the virus in China. The two arrived at Miramar on different planes and were housed in separate facilities on base. They have since been hospitalized.

“At this time there is no indication of person-to-person spread of this virus at the quarantine facility, but CDC will carry out a thorough contact investigation as part of its current response strategy to detect and contain any cases of infection with this virus,” Dr. Christopher Braden, deputy director of the CDC’s National Center for Emerging and Zoonotic Infectious Diseases, said in a statement.

To date, a total of eight coronavirus cases have been documented in California, accounting for more than half of the 14 infections confirmed across the United States, none of them fatal.

ALSO READ: US woman infected with coronavirus dies in Wuhan

Two cases have been confirmed in Illinois and one each in the states of Washington, Arizona, Wisconsin and Massachusetts.

Only two of the 14 cases are believed to have been transmitted person-to-person within the United States - both between married couples after one of the spouses returned home from a recent visit to China.

More than 800 Americans and family members evacuated from China aboard State Department-chartered flights since late last month have been placed under quarantine - the first imposed by the CDC in 50 years - at one of five US military bases in California, Texas and Nebraska, according to the CDC.

READ MORE: US orders evacuation of diplomats from Wuhan

The initial group of nearly 200 evacuees were released earlier this week from March Air Reserve Base near Los Angeles after the 14-day presumed incubation period of the virus had lapsed without anyone falling ill, the CDC said.