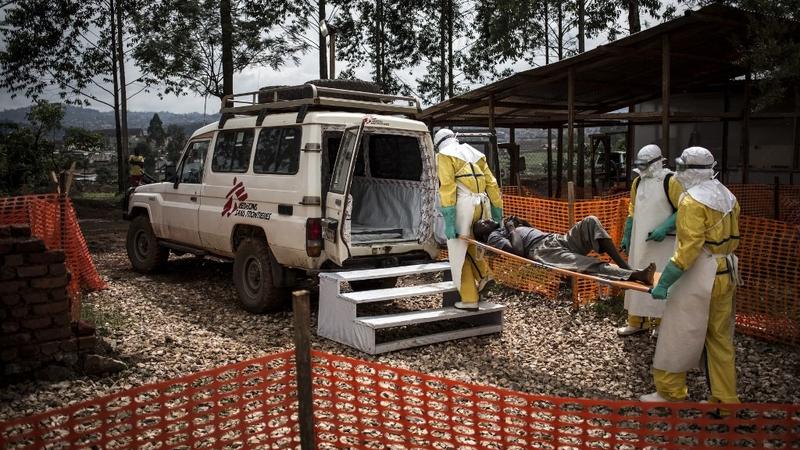 In this Nov 4, 2018 photo, health workers move a patient to a hospital after he was cleared of having Ebola inside a MSF (Doctors Without Borders) supported Ebola Treatment Centre (ETC) in Butembo, in North Kivu province. (John WESSELS / AFP)

GENEVA — The World Health Organization (WHO) announced Wednesday that the Ebola outbreak which started in August 2018 in the Democratic Republic of Congo (DRC) still constitutes a Public Health Emergency of International Concern (PHEIC).

WHO Director-General Tedros Adhanom Ghebreyesus said at a press briefing here on Wednesday that the decision was the unanimous view of the WHO Emergency Committee.

Major concerns from the WHO is that withdrawing the PHEIC now might have adverse consequences for the response efforts through diminishing focus, let alone the serious ongoing outbreaks of other diseases, including measles and cholera, in the country.

The committee acknowledged the revised risk assessment, which puts the risk now as high at national and regional levels, and low at the global level. It said the remaining challenges include community acceptance for response measures, protection of personnel at strategic health checkpoints, improvement of infection prevention and control practices in health facilities, strengthening of the local health system, and comprehensive treatment and support for patients in recovery.

The WHO recommends that the DRC should continue building trust with survivors and community awareness and engagement to prevent resurgence of the disease, while enhancing acceptance of response measures and addressing access and security issues. Cross-border screening and monitoring at checkpoints around hotspots and at main roads should also continue.

The WHO recommends other at-risk countries to continue preparedness for detecting and managing imported or locally acquired cases, and to strengthen risk communications and community engagement, especially at points of entry.

Still the WHO advises that no country should close borders or place any restrictions on travel and trade, and it does not consider entry screening at airports or other ports of entry outside the region to be necessary.

The latest DRC Ebola epidemic began in early August 2018 in its eastern region of Kivu. As of Monday, there were a total of 3,431 cases in the DRC, of which 3,308 were confirmed and 123 were probable, while 2,253 persons have died.