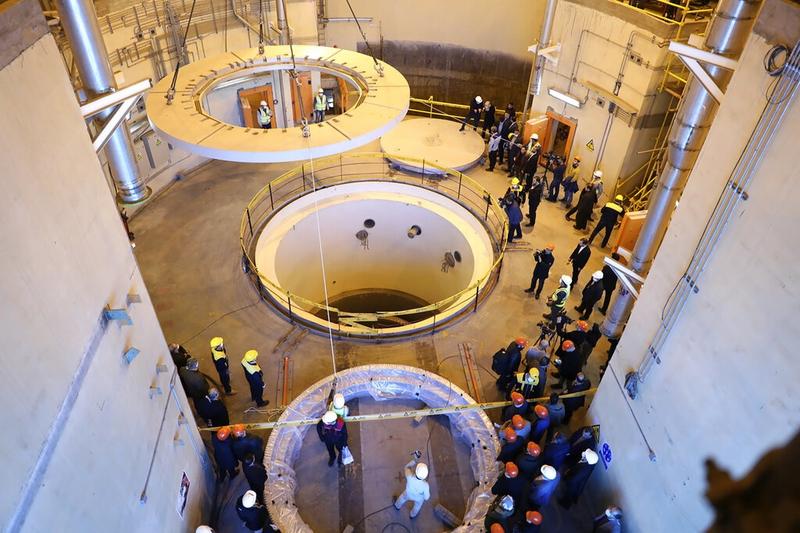 In this Dec 23, 2019 file photo released by the Atomic Energy Organization of Iran, technicians work at the Arak heavy water reactor's secondary circuit, as officials and media visit the site, near Arak, Iran. (ATOMIC ENERGY ORGANIZATION OF INRA VIA AP)

PARIS/LONDON - France, Britain and Germany formally triggered the dispute mechanism in Iran's nuclear deal with world powers on Tuesday, the strongest step they have taken so far to enforce an agreement that requires Iran to curb its nuclear programme.

The European powers said they had taken the step to avoid a crisis over nuclear proliferation being added to an escalating confrontation in the Middle East.

In a statement, the European powers said they still want the deal to succeed and were not joining a "maximum pressure" campaign against Iran by the United States, which abandoned the deal in 2018 and has reimposed sanctions

In a statement, they said they still want the deal to succeed and were not joining a "maximum pressure" campaign against Iran by the United States, which abandoned the deal in 2018 and has reimposed sanctions.

Triggering the dispute mechanism amounts to formally accusing Iran of violating the terms of the agreement and could lead eventually to the reimposition of UN sanctions that were lifted under the deal.

Iran has gradually rolled back its commitments under the accord since the United States quit, arguing that it has the right to do so because of Washington's actions.

"We do not accept the argument that Iran is entitled to reduce compliance with the JCPoA," the three European countries said in a joint statement, using the formal name of the agreement, the Joint Comprehensive Plan of Action.

In triggering the dispute mechanism, "our three countries are not joining a campaign to implement maximum pressure against Iran. Our hope is to bring Iran back into full compliance with its commitments under the JCPoA."

To trigger the dispute mechanism, the three European countries notified the European Union, which acts as guarantor of the agreement. The EU's foreign policy chief, Joseph Borrell, said the bloc's aim was not to reimpose sanctions, but to "resolve issues relating to the implementation" of the deal.

After months of announcing gradual steps to reduce compliance, Iran said on Jan 6 it would scrap all limits on enriching uranium, but would continue cooperating with the UN nuclear watchdog.

The nuclear diplomacy is at the heart of a broader confrontation between Iran and the United States, which killed Iran's most powerful military commander in a drone strike on Jan 3 after tit-for-tat exchanges that began with the killing of an American contractor on a base in Iraq.

The European countries said in their statement they were acting "in good faith with the overarching objective of preserving the JCPoA and in the sincere hope of finding a way forward to resolve the impasse through constructive diplomatic dialogue, while preserving the agreement and remaining within its framework."

"Given recent events, it is all the more important that we do not add a nuclear proliferation crisis to the current escalation threatening the whole region," they said.

US President Donald Trump abandoned the nuclear deal in 2018, arguing that the agreement reached under his predecessor Barack Obama was too weak and new sanctions were needed to force Iran to accept more stringent terms. Iran has said it will not negotiate unless sanctions are lifted.

In one of the strongest calls yet from Europe for a new agreement to replace the deal, British Prime Minister Boris Johnson said the way forward was to agree a new "Trump deal".

Under the dispute mechanism outlined in the deal, the EU should now inform the other parties - Russia and China as well as Iran itself of the European move. There would then be 15 days to resolve differences, a deadline which can be extended by consensus.

The process can ultimately lead to a "snapback" - the reimposition of sanctions in place under previous UN resolutions.

"At one point we have to show our credibility," said a European diplomat. A second diplomat said: "Our intention is not to restore sanctions, but to resolve our differences through the very mechanism that was created in the deal."