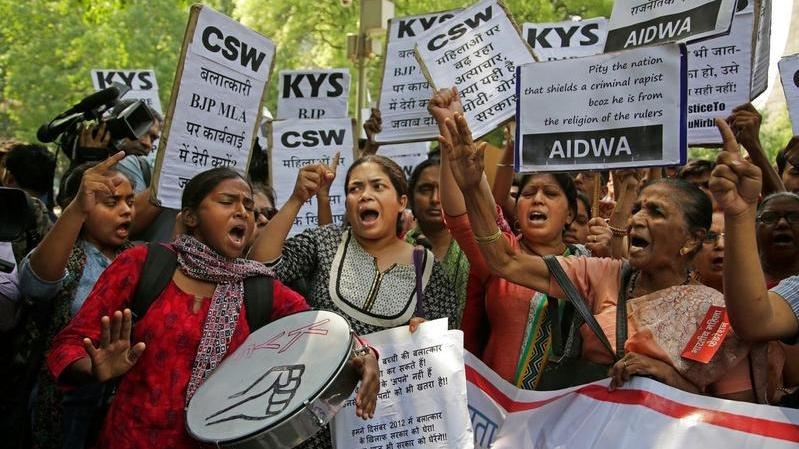 In this April 12, 2018 file photo, Indian students and activists participate in a protest against recent cases of rape in the country, in New Delhi, India. (ALTAF QADRI / AP)

NEW DELHI - India's Supreme Court on Tuesday dismissed pleas for a review of the death sentence handed down to four men in the rape and murder of a young woman on a New Delhi bus, leaving an appeal to the president as their only possible recourse.

The 2012 attack on the 23-year old physiotherapy student on the moving bus shocked India and led to tough new laws against sexual violence, including the death penalty for rape in some cases.

We have gone through the curative petitions and relevant documents. In our opinion, no case is made out within the parameters indicated in the decision of this court

The victim died from her injuries two weeks later in a hospital in Singapore.

The court said that there were no grounds to review its decision upholding the death sentence for the four men, all from working class neighbourhood in the Indian capital.

"We have gone through the curative petitions and relevant documents. In our opinion, no case is made out within the parameters indicated in the decision of this court," the court said its order.

The men were convicted in 2013 and lost all appeals in a higher court. Last week, a Delhi court said they would be hanged on Jan 22.

The family of the victim welcomed the court ruling.

"I am feeling good. We want to see them hanged. Only then will justice be served to our daughter who died in pain," said her father.

Sexual violence against women is a huge problem in India where a rape occurs every 20 minutes. Many of the cases have drawn revulsion and anger across the country.

A. P. Singh, a lawyer for the four defendants, said that he would read the written order of the court and decide the next course of action.