Yum China 'to work with CICC, Goldman on HK listing' 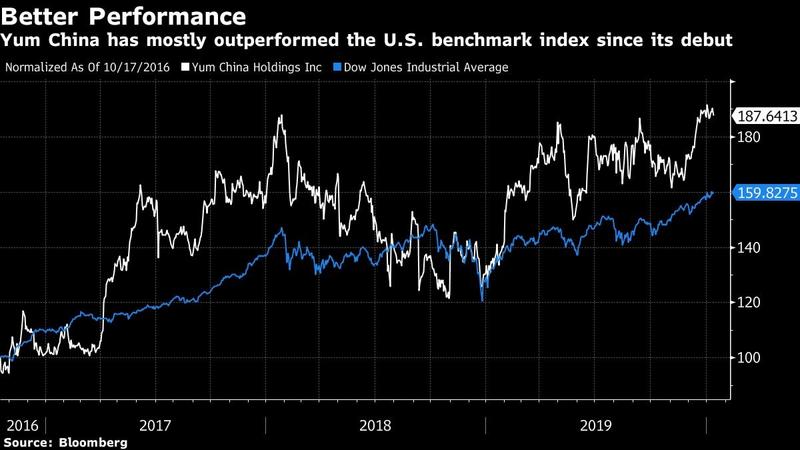 Yum China Holdings Inc. is working with China International Capital Corp. and Goldman Sachs Group Inc. on the preparations of a second listing in Hong Kong, fueling the wave of US-listed Chinese mainland companies returning to a market that’s closer to home.

The operator of Pizza Hut and KFC restaurants in China is working with the banks on the share sale, according to people familiar with the matter. The listing could take place as soon as this year, said the people, who asked not to be identified as the information is private.

IFR reported last week that Yum China is considering a listing in Hong Kong which could raise as much as US$2 billion, citing unidentified people

A successful share sale by New York-listed Yum China would bolster Hong Kong’s push to lure marquee mainland firms to raise funds in a city that has been shaken by months of protests stemming from the extradition bill incident. It could also be a vote of confidence in the financial hub’s future. Hong Kong Exchanges & Clearing Ltd. has said it’s seeing a spike in inquiries about second listings from mainland companies after Alibaba Group Holding Ltd.’s US$13 billion share sale in November.

The HKEx is discussing with mainland technology firms including Trip.com Group Ltd. and NetEase Inc. for possible share sales in the city, people with knowledge of the matter told Bloomberg News earlier this month.

Yum China was spun off from Louisville, Kentucky-based Yum! Brands Inc. in 2016. The unit, which also operates Mongolian hotpot chain Little Sheep as well as Taco Bell in China, had more than 8,900 restaurants across the world’s second-largest economy as of the end of September. It hired about 450,000 people in the country, according to its latest presentation.

The company in August agreed to buy a controlling stake in Huang Ji Huang Group, a Chinese-style simmer pot restaurant operator. Yum China rejected a buyout offer from an investor group led by Hillhouse Capital Corp. in 2018, Bloomberg News reported at that time.

Shares of Yum China have risen 88% since its 2016 debut, outperforming the 60% gain in Dow Jones Industrial Average.

IFR reported last week that Yum China is considering a listing in Hong Kong which could raise as much as US$2 billion, citing unidentified people.

Details of Yum China’s proposed offering could still change as deliberations are at an early stage, the people said. A representative for Goldman Sachs declined to comment, while representatives for Yum China and CICC didn’t respond to requests for comment.