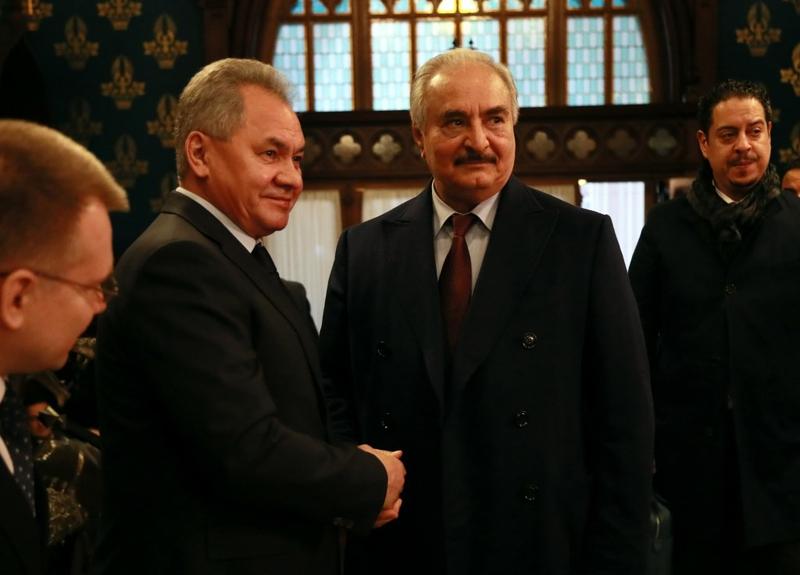 MOSCOW / ANKARA — Khalifa Haftar, commander of the Libyan National Army, has left Moscow without signing a ceasefire agreement drafted at talks in Russia on Monday, the TASS news agency cited the Russian Foreign Ministry as saying on Tuesday.

Haftar had asked for until Tuesday morning to make up his mind on the deal after indirect talks with his rival, Fayez al-Serraj, who heads Libya’s Tripoli-based internationally recognized government, Turkey’s foreign minister said.

If the putschist Haftar’s attacks against the people and legitimate government of Libya continue, we will never refrain from teaching him the lesson he deserves

His failure to sign the agreement at talks mediated by Turkey and Russia may complicate a diplomatic effort to stabilize the situation in Libya which has been mired in chaos since the toppling of Muammar Gaddafi in 2011.

Serraj, whose forces have struggled to halt an assault on Tripoli by Haftar’s LNA, signed the ceasefire agreement after talks that lasted about eight hours, Lavrov said on Monday.

Haftar declined to sign the ceasefire deal because it did not include a deadline for disbanding government forces, the Interfax news agency cited a Libyan military source as saying.

Turkey backs Haftar’s rival, Serraj, while Russian military contractors have been deployed alongside Haftar’s LNA forces, which are also backed by the United Arab Emirates, Egypt and Jordan.

Turkey will not refrain from “teaching a lesson” to Khalifa Haftar if his eastern Libyan forces continue attacks against the country’s internationally recognized government, President Tayyip Erdogan said on Tuesday.

He said Haftar had “run away” from Moscow after Monday’s peace talks between him and the head of the Tripoli-based government, Fayez al-Serraj, failed to lead to an open-ended ceasefire to end their nine-month conflict.

“If the putschist Haftar’s attacks against the people and legitimate government of Libya continue, we will never refrain from teaching him the lesson he deserves,” Erdogan said in a speech to his AK Party lawmakers in parliament.

“It is our duty to protect our kin in Libya,” Erdogan added, saying that Turkey had deep historical and social ties with the north African country and that Haftar would have taken over the entire nation if Ankara had not intervened.

He said Turkey will join Germany, Britain and Russia at a summit which Chancellor Angela Merkel is to host in Berlin on Sunday to discuss Libya, which has been mired in chaos since the toppling of Muammar Gaddafi in 2011.