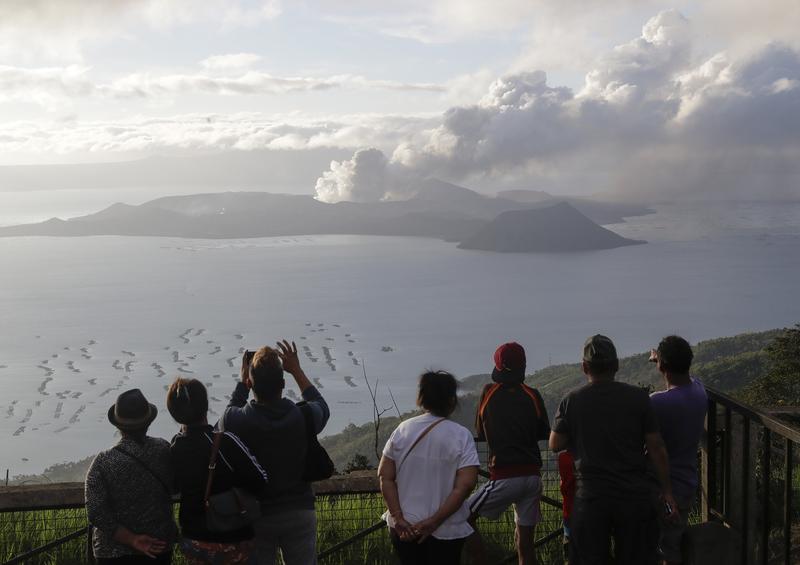 People look from Tagaytay, Cavite province, south of Manila, as Taal Volcano continues to spew ash on Jan 14, 2020. Thousands of people fled the area through heavy ash as experts warned that the eruption could get worse and plans were being made to evacuate more. (AARON FAVILA / AP)

A couple getting married in the Philippines over the weekend witnessed a surprise guest at their wedding.

In what has made for dramatic shots that have since gone viral on social media, Chino and Kat Palomar exchanged vows in Cavite province on Sunday under a gigantic cloud of smoke and ash from Taal, one of the world’s smallest active volcanoes.

“The mood was surprisingly calm despite the large billows of smoke that were already prominently visible in the ceremony area,” said Randolf Evan, the wedding photographer.

Evan related how the volcano began erupting an hour or two before the wedding started, and said ash began to fall on the party toward the end of the ceremony.

More than 24,000 people have been forced to evacuate their homes from the volcanic island on which Taal is located south of central Manila, and in the area immediately around it - normally a popular tourist spot.

Social media users responded with amazement to the shots of the bride and groom and their party in a white canvas tent lit with fairy lights under billowing clouds streaked by lightning.

“Kudos to the wedding planner,” one jokey comment said. “This is going to be tough to top.”

Despite the alarming backdrop, Evan said the bridal couple were little affected.

“They were actually relaxed and collected throughout the whole wedding,” Evan said.

“We later found out their wedding was 8 years and 2 kids in the making, so this day they planned for was going to be special no matter what, with or without the Taal volcano’s intervention!”