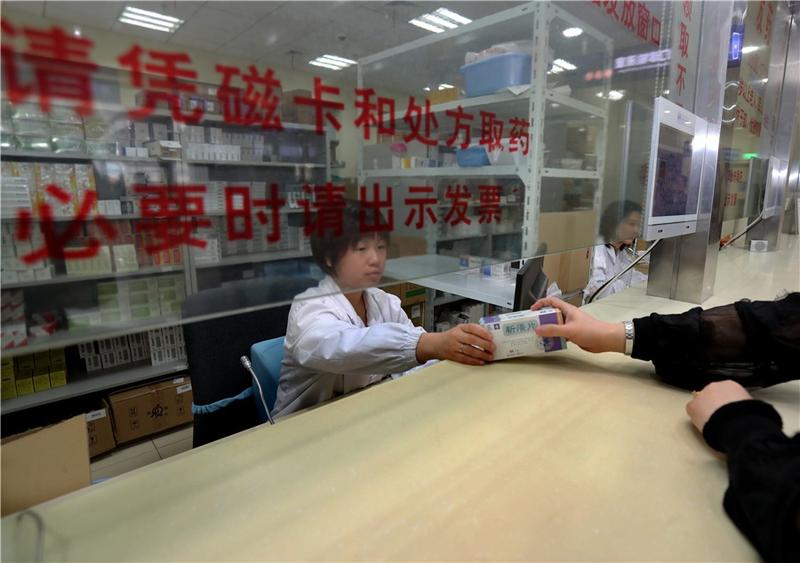 Drugs are handed to a patient in the pharmacy at the Shanghai Chest Hospital. A reduction in prices has brought many benefits. (PHOTO / XINHUA)

Li Lanzhi, a lung cancer patient in Beijing, used to spend nearly 50,000 yuan (US$7,255) a month on a new drug called alectinib to control the disease.

The drug, developed by Swiss pharmaceutical company Roche and sold under the name Alecensa, has proved effective in easing breathing during sleep for patients with Li's type of cancer.

However, because of the high cost, she feared she would be unable to afford it much longer, as the balance of her pension savings account was falling rapidly.

"I would have given up but for my son. He comforted me by saying that at least I had a drug to use," she said.

Li's fears may soon end. On Jan 1, the drug was included in the country's basic healthcare insurance program for reimbursement. That followed a significant drop in its price through negotiations led by the National Healthcare Security Administration last year.

As a result, starting as early as this month, medical expenses for patients like Li could drop by 80 percent or more.

Last year, 70 new drugs were placed on the list for reimbursement after months of talks between the authorities and pharmaceutical companies, both domestic and international

In addition to patients with lung cancer, many others with serious diseases can expect to see their spending on drugs drop considerably this year because of price negotiations.

Last year, 70 new drugs were placed on the list for reimbursement after months of talks between the authorities and pharmaceutical companies, both domestic and international.

The negotiations resulted in the average price of drugs being reduced by just over 60 percent, according to the health administration. Agreements were also renewed for another 27 drugs already on the list, with an average price cut of 26 percent, the administration said. The expanded list took effect on Jan 1.

These drugs have proved effective in treating cancer and other serious illnesses, such as hepatitis, diabetes, tuberculosis, and both rare and cardiovascular diseases.

Most of the drugs have only been on the market for just two years. Their inclusion on the reimbursement list will further reduce patients' financial burden, according to the administration.

Xiong Xianjun, head of medical services supervision at the administration, said, "The negotiations were the largest of their kind in China in recent years, resulting in many achievements, including a significant fall in drug prices.

"Some imported drugs will be sold at the lowest prices in the world on the Chinese mainland. Coupled with reimbursement by healthcare insurance funds, it is estimated that the price drop will reduce patients' spending more than 80 percent in general, and by over 95 percent in a few cases." 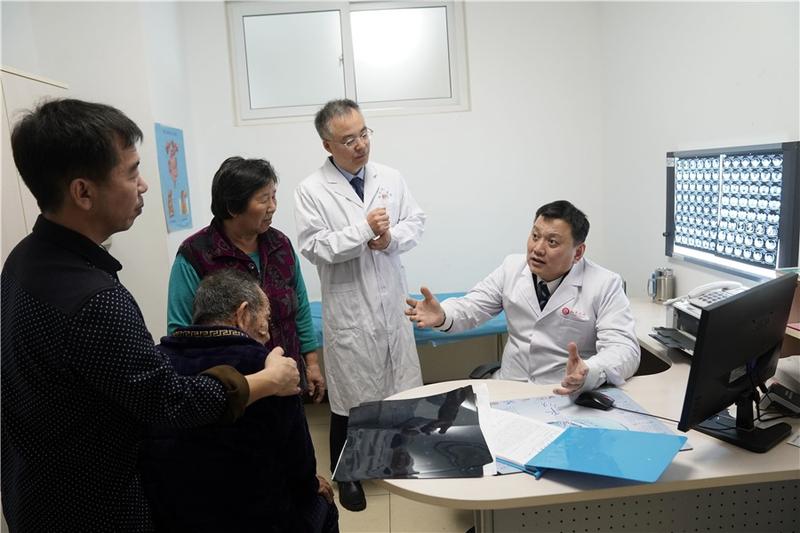 Li Ziyu (right), an expert at the Beijing Cancer Hospital, explains treatment to a patient in Cangzhou, Hebei province, as part of cooperation between large hospitals in Beijing and smaller ones outside of the city. (PHOTO / XINHUA)

Only a few years ago, many imported patented drugs, including those to treat cancer, cost more in China than in many other countries due to factors including higher tariffs, costs incurred by middlemen and a lack of domestic competitors. There was no price negotiation system, and many of the drugs were not included in the basic healthcare insurance program for reimbursement.

This placed a great financial burden on millions of cancer patients, with many of them having to buy cheaper generic drugs from countries such as India through the internet, posing potential health and legal risks.

Last year, Dying to Survive, a movie based on real-life events centering on the dilemma facing many leukemia patients, sparked heated public debate, with calls being made for accelerated efforts to improve patients' access to expensive patented drugs

Cancer cases and other chronic illnesses such as cardiovascular disease are rising. According to the National Cancer Institute, more than 10,000 people a day in China are diagnosed with cancer due to the aging population and unhealthy lifestyles. As a result, medical bills are expected to rise rapidly in the coming years.

Last year, Dying to Survive, a movie based on real-life events centering on the dilemma facing many leukemia patients, sparked heated public debate, with calls being made for accelerated efforts to improve patients' access to expensive patented drugs.

The film focuses on Lu Yong, a businessman in Wuxi, Jiangsu province, who was diagnosed with leukemia in 2002 and initially spent 24,000 yuan a month on Gleevec, a patented drug developed by Swiss company Novartis. However, just two years later, the high cost forced him to turn to a generic version of a drug sold in India, which cost just 4,000 yuan a box.

He told many patients about this online and bought the drug for them through the internet, but in 2014, Lu was detained by police and charged with selling fake drugs, as the one he bought was not registered with Chinese regulators.

Under the revised Drug Administration Law, which took effect on Dec 1, drugs legally available overseas are now not considered to be fakes.

Prosecutors eventually withdrew the charges and released Lu in 2015, following petitions from more than 300 leukemia patients.

After the case, the drug Lu bought was included on the reimbursable list by authorities in many areas of China, and most patients who used to rely on generic versions from India, have since turned to patented versions, he said.

In 2015, to reduce the prices of expensive patented drugs and improve access to them for patients with serious diseases, China launched pilot negotiations with pharmaceutical companies. In return for cutting prices, the companies can increase sales by being included on the national medical insurance program.

This resulted in the first three drugs — two for lung cancer and one for hepatitis B — being approved for inclusion in the healthcare insurance program in 2016.

The following year, 36 drugs, including 15 to treat cancer, were approved. In 2018, a total of 17 anti-cancer drugs were included in the program. 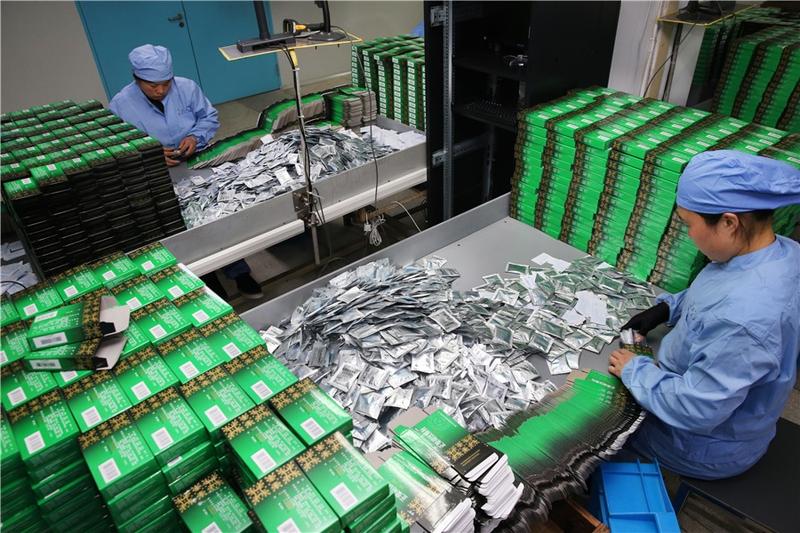 In addition to improving patients' access to expensive drugs, lowering prices can help control spending increases by the basic healthcare insurance fund. Meanwhile, buying drugs in bulk can motivate domestic producers to improve research and development to enable their products to be included on the reimbursement list, Shi said.

Among the 70 new drugs included on the list, three usFudan University in Shanghai, who took part in the negotiations last year, said the National Healthcare Security Administration set up a special team of about 40 experts to assess prices of drugs in the negotiations.

Beforehand, the experts provided the health administration with prices for each drug for reference, based on a number of factors, including China's economic development, the number of patients with a certain disease, and the prices of the drugs in some other countries, he said.

After the negotiations, the price of Sintilimab, an injected drug used to treat Hodgkin's lymphoma — a lymph gland cancer — that became available on the domestic market early last year, fell by nearly 64 percent. The drug was developed by Innovent, a pharmaceutical company in Suzhou, Jiangsu province.

Xi Hao, Innovent's chief financial officer, said the company was encouraged to cut the drug's price, with an eye to profits.

Despite the reductions, including the drug in the basic healthcare insurance program will help increase its sales, which will lead to increased production and reduced manufacturing costs. 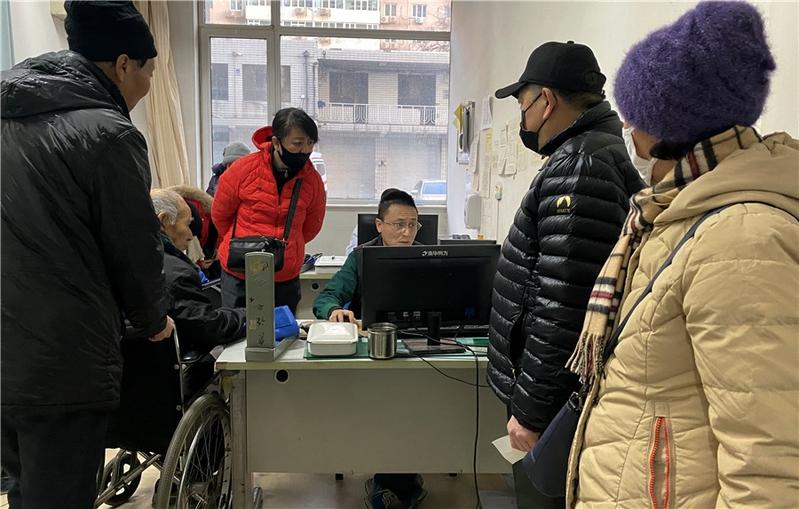 A doctor gives a diagnosis in the emergency room at Fuxing Hospital in Beijing. (LIANYI / CHINA DAILY)

Liu Hongsheng, an official from the Jilin Provincial Social Security Administration, said negotiations in recent years have resulted in considerable price reductions for a number of drugs. This means that more patients with serious or chronic diseases can access better-quality medication at lower prices.

He said the authorities should continue to conduct negotiations to reduce prices, and measures should be taken to guide domestic pharmaceutical companies to improve innovation.

To ensure the quality of drugs, authorities should not lower prices too much, to avoid producers using substandard materials, he added.