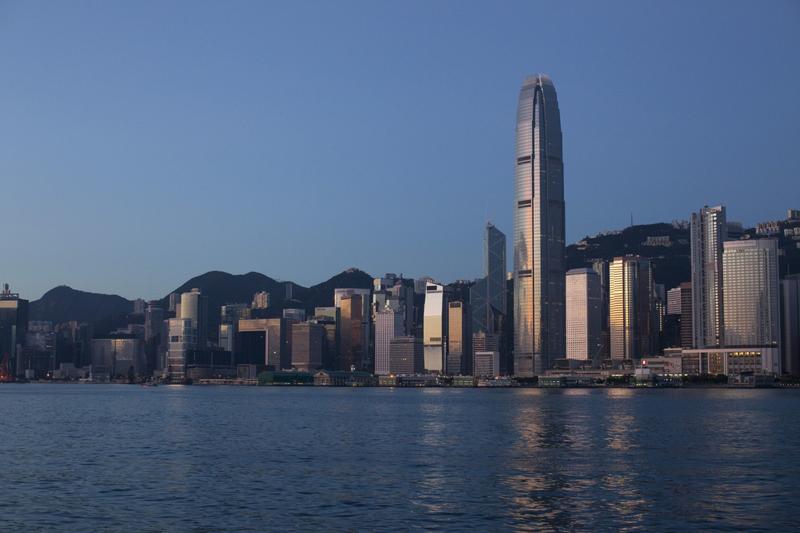 Hong Kong’s government is banking on the city’s resilience in the face of economic calamity, like the bounce-back after the Asian financial crisis and its recovery following the 2003 SARS epidemic, as it insists things are “less bad than before".

A case in point is last week’s rise in an index of sentiment for small- and medium-sized enterprises, aided by a Christmas shopping season that was relatively free from violent street demonstrations. 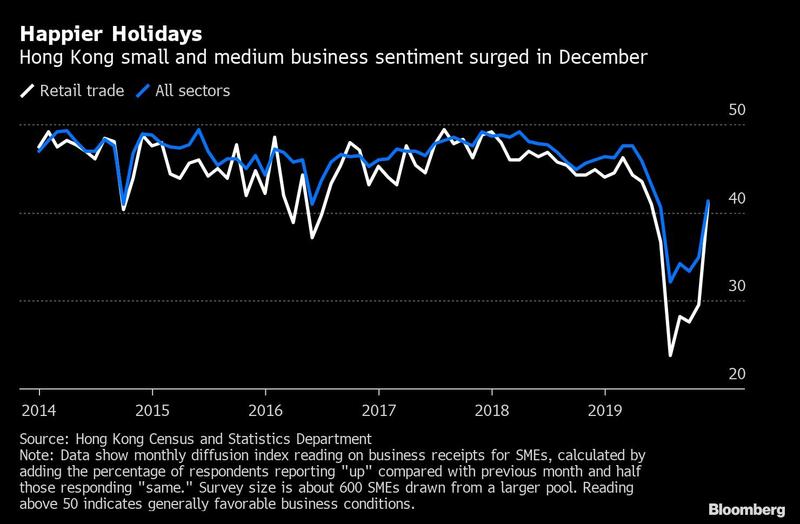 According to an official statement, that “reflected a moderation in the pessimism of business sentiment” after more than seven months of anti-government protests that wrought destruction in shopping precincts and likely sparked the first annual recession in a decade.

The government is working to seek a resolution to the crisis, and factors that could propel a rebound are scarce - a return to last January’s record influx of 5.5 million mainland tourists won’t happen soon, if ever. Chances of a stabilization hang more on the city’s strengths in finance and trade, both of which mostly serve the Chinese economy.

ALSO READ: 2020: Stopping the ‘downpour’ and fixing the ‘leaking roof’ 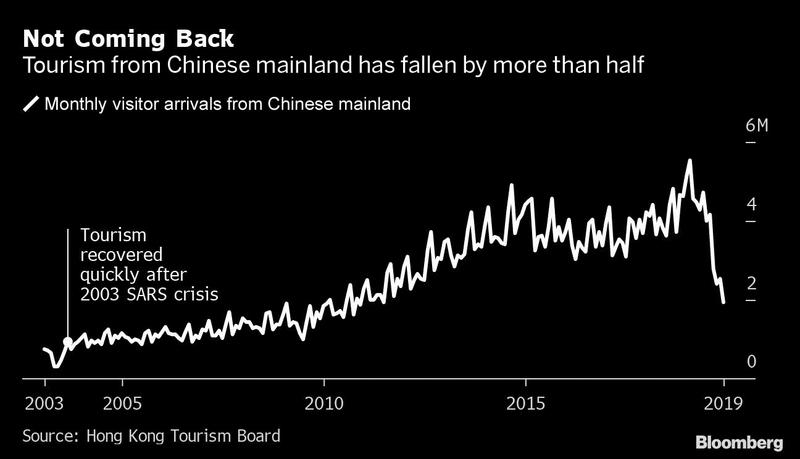 “There will be many IPOs happening in Hong Kong this year; there’s going to be a lot of debt issuance in the credit market, the dollar market because Chinese companies need dollar funding,” said Alicia Garcia Herrero, chief economist for Asia Pacific at Natixis. Brightening sentiment among small businesses shows that “Hong Kong is so flexible,” she said.

There are a lot of global investors that want to invest in Chinese stocks and other financial products, and they do it through Hong Kong. That hasn’t changed.

Still, the government estimates that the economy contracted 1.3 percent in 2019 and economists forecast stagnation in 2020. Financial Secretary Paul Chan Mo-po pledged last week to spend “boldly” in next month’s annual budget to assist those affected the most by the downturn. Previous stimulus rounds, though, have failed to impress.

The Hong Kong government is set to unveil a fresh series of relief measures “imminently” including extending a transport fare concession to those age 60 and older, from age 65 currently, Sing Tao Daily reported, according to unidentified people.

Amid the city’s tourism woes, the financial sector’s resilience has been remarkable, with the Hong Kong Stock Exchange the top venue in the world after raising about US$40.3 billion last year, according to data compiled by Bloomberg. Chinese mainland companies accounted for almost two-thirds of the money raised. KPMG forecasts almost as many Hong Kong IPOs this year, raising as much as HK$300 billion (US$38.6 billion) according to a December estimate. 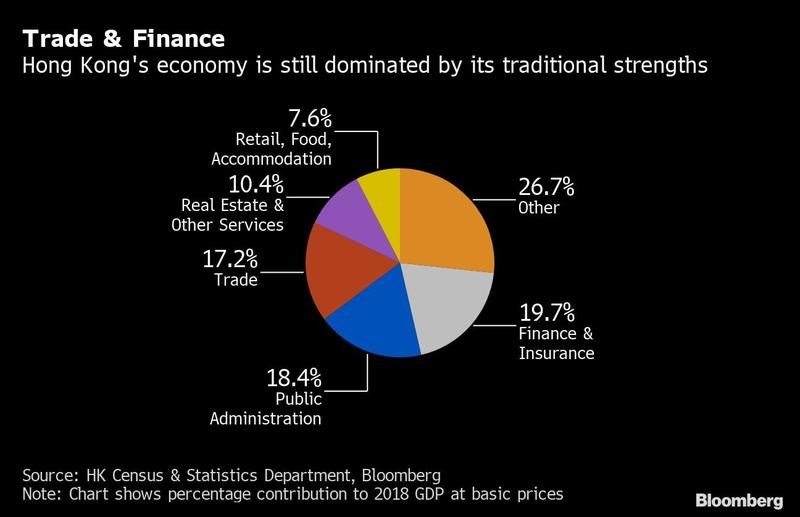 Mainland investors were also net buyers of city stocks for a 10th straight month in December, again signaling the city’s role as the conduit for the mainland. Money is flowing in the opposite direction. Offshore investors have been net buyers of mainland stocks via the exchange links with Hong Kong for all but four months since the Shenzhen link opened in December 2016.

“There are a lot of global investors that want to invest in Chinese stocks and other financial products, and they do it through Hong Kong,” said Tommy Wu, senior economist with Oxford Economics in Hong Kong. “That hasn’t changed.”

For banks like HSBC Holdings Plc and Standard Chartered Plc, analysts expect steady fundamentals in 2020 despite being occasionally dragged into the domestic standoff. There has been little sign of major capital outflows from Hong Kong and pressure has eased in recent weeks since the US and China reached an initial trade agreement, according to Garcia Herrero.

In 2019, the trade dispute was the initial factor that started to drag down the local economy long before the protests erupted in June. That hammered the city’s port, with exports in October plunging the most since 2016. 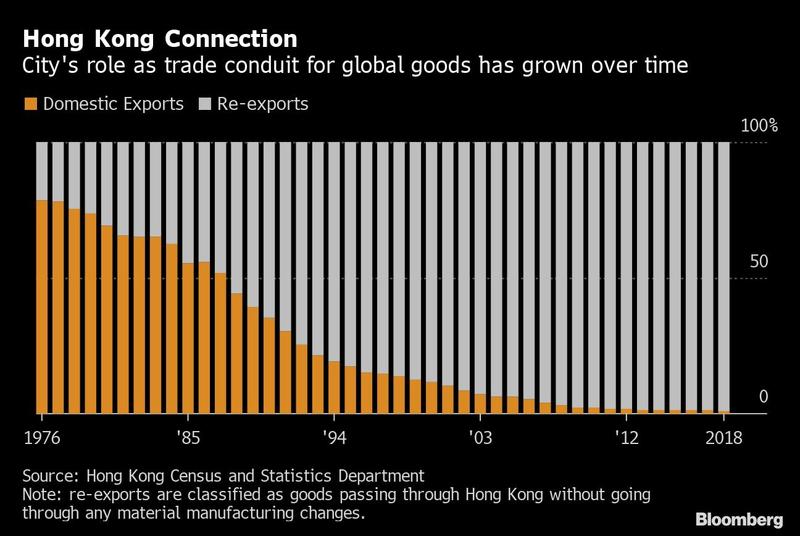 The trade deal signing in Washington this week should cement a modestly improving outlook for global trade, a long-overdue piece of good news for Hong Kong. A cyclical recovery in Asia’s manufacturing sector appears to be underway.

“We have gone through very difficult times, but the institutional strength and core competitiveness of Hong Kong remain unchanged,” Chan said in an interview last week with Bloomberg Television’s Yvonne Man. “Hong Kong is resilient.”