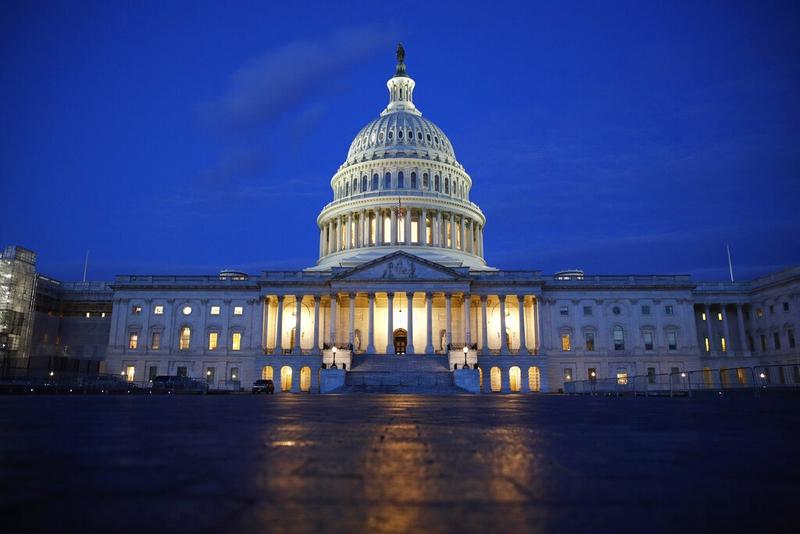 In this Dec 4, 2019 file photo, light shines on the US Capitol dome in Washington. (PATRICK SEMANSKY / AP)

WASHINGTON - Republican members of the US Senate, poised to begin an impeachment trial against US President Donald Trump in the coming days, voiced opposition on Monday to any attempt to dismiss the charges against him without a trial.

The Democratic-led US House of Representatives is expected to formally send the charges to the Senate this week, where Majority Leader Mitch McConnell has vowed to help acquit his fellow Republican.

Trump appeared on Sunday to reverse his position on how the Senate should proceed, writing on Twitter that a full trial would give the Democrats who pursued impeachment undeserved credibility and signaling support for dismissal of the charges with no trial.

The Democratic-led US House of Representatives is expected to formally send the impeachment charges against Trump to the Senate this week, where Majority Leader Mitch McConnell has vowed to help acquit his fellow Republican

“There is almost no interest” among Republican senators for a motion to dismiss the House charges, Republican Senator Roy Blunt told reporters on Monday.

"I will not be supporting a motion to dismiss," said Republican Senator Mitt Romney. "At this stage, the allegations that have been made are serious and deserve to be given consideration with the arguments for and against."

ALSO READ: Bolton says he is willing to testify in Trump impeachment trial

Senator Susan Collins, among a handful of Republicans whom Democrats hope to persuade to back their call for witness testimony, told reporters she and a small group of colleagues were discussing a trial format that would allow lawmakers to vote on whether to include witnesses after hearing from each side and having the opportunity to pose questions.

“We’re still talking, and I think the discussions have been going well,” Collins told reporters, saying she strongly favored the approach taken during the impeachment trial of former President Bill Clinton, a Democrat.

House Speaker Nancy Pelosi delayed sending the two articles of impeachment passed by the House on Dec 18 to the Republican-led Senate, preventing McConnell from holding a quick trial right away that cleared the president.

The House charged Trump with abuse of power and obstruction of Congress. The impeachment charges stem from Trump's request that Ukraine investigate former Vice-President Joe Biden, a leading contender for the Democratic nomination to face Trump in the Nov 3 presidential election.

House Democrats will discuss on Tuesday morning how to move forward, Pelosi said on Sunday, with the chamber possibly voting to send the charges to the Senate later that day.

Pelosi said the delay was meant to convince the US public of the need to call witnesses in the Senate trial after Trump's administration blocked some current and former officials from cooperating in the House impeachment inquiry.

McConnell has yet to say definitively how the Senate will conduct the trial.

He has not committed to allowing any witnesses or new documents in the proceedings and instead could steer the process toward a quick acquittal. McConnell has left open the possibility of deciding on witness testimony later in the trial. He has said he sees no chance of the Senate convicting Trump.

The Senate, which could open a trial rapidly after receiving the charges from the House, plans to meet daily except on Sundays each week to conduct the proceedings, likely beginning each day at noon EST (1700 GMT) and working until either 5 pm or 6 pm EST (2200 or 2300 GMT), according to congressional aides.

The Senate is expected to vote to acquit Trump even though some moderate Republicans have bristled over McConnell's reflexive support for the president. Conviction and removal of Trump would require a two-thirds majority of those present in the 100-member chamber.