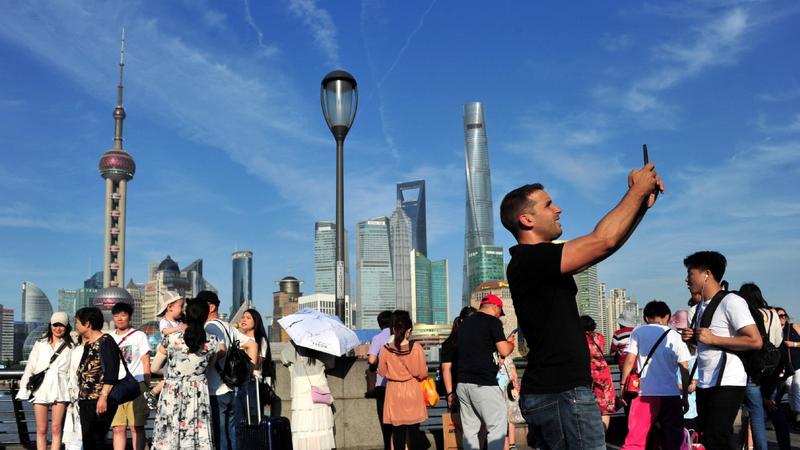 Travelers from home and abroad enjoy the sights of the Bund in Shanghai on May 29. (YANG YI / FOR CHINA DAILY)

China has once again ranked second in the world in terms of tourism revenue, according to a report released in early January.

The report on the global tourism economy was jointly developed by the World Tourism Cities Federation and the Tourism Research Center of the Chinese Academy of Social Sciences.

"Speaking overall, Chinese travel spending has been on the rise," says Cui Li, vice-president of Qyer.com, a Chinese online travel platform for social networking and services.

From the perspective of the personal-travel market, Chinese people have been making increasingly frequent trips in recent years, Cui says.

Users of the platform make trips at least six times a year on average. Most younger travelers are willing to pay for interesting experiences that are cost-effective, Cui adds.

The China-US tourism sector has been affected by the bilateral trade frictions in recent years. In 2017, outbound tourism from the US to China reached US$35.5 billion, an increase of 4.1 percent year-on-year, but still 6.3 percentage points lower than in 2016, according to the report.

At the same time, the growth in the number of Chinese arrivals to the US witnessed its first negative growth of around 6 percent in 2018.

The global tourism market saw 12.31 billion traveler visits in 2019, an increase of 4.6 percent year-on-year, the report says. Global tourism income stood at US$5.8 trillion last year, a drop of 0.1 percent compared with 2018.

Global uncertainties－geopolitics, trade frictions and the risk of regional conflict－are likely to become important factors hindering the development of the tourism economy going forward. But strong demand and an increasing regional focus on tourism development are still likely to keep the global tourism economy growing at a rate of 3.6 percent, the report says.

This growth will mainly rely on the Asia-Pacific region and emerging economies, according to the report.

The report predicts that the number of tourism visits will increase by 4.2 percent to 12.82 billion globally in 2020, and tourism income is predicted to reach US$6.02 trillion.