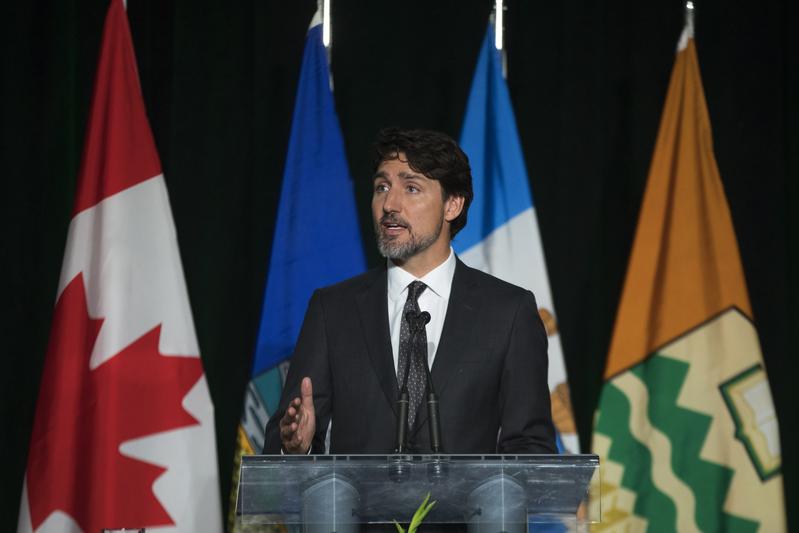 Canadian Prime Minister Justin Trudeau speaks during a memorial for the victims of the Ukrainian plane disaster in Iran this past week, in Edmonton, Alberta, Jan 12, 2020. (TODD KOROL / THE CANADIAN PRESS VIA AP)

OTTAWA/SINGAPORE/KIEV — The Canada-based International Civil Aviation Organization (ICAO) has accepted an invitation from the Iranian government and will send experts to join a probe into the downing of a Ukrainian passenger plane which killed all 176 people on board.

I think if there were no tensions, if there was no escalation recently in the region, those Canadians would be right now home with their families.

The ICAO will send expert technical staff to advise on and observe the investigation, the specialized UN agency said in a statement on Monday.

The missile fired brought down the plane on Jan 8 killing all 176 aboard, including 57 Canadians.

Iran has urged all parties involved to contribute to the probe and has invited foreign teams of experts, including from Boeing, to examine the circumstances of the crash with Iranian and Ukrainian experts.

Iran has signaled that Canada’s Transportation Safety Board (TSB) would play a more active role than international rules require in the investigation of the Iranian military’s shooting down of the plane, TSB head Kathy Fox said on Monday.

“In this investigation - and I want to be clear about this - - we do not yet fully know what the scope of our role will be,” Fox said in a news conference.

She added that “there have been early signs that Iran is allowing the TSB to play a more active role than normally permitted”, such as inviting its investigators to participate in downloading and analyzing the data in the cockpit voice and flight data recorders “whenever and wherever that takes place”.

Since the cause of the crash is known, the probe will tackle other questions, such as whether the missile was launched accidentally or on purpose, why Iran’s airspace remained open at the time, and why airlines continued to fly from the Tehran airport.

The plane took off despite heightened tensions after Iran’s missile attack on Iraqi bases housing US troops earlier on the day of the tragedy. Iran said it attacked the bases in retaliation for the US killing of an Iranian general Qassem Soleimani in Baghdad in a Jan 3 drone strike.

Canadian Prime Minister Justin Trudeau said on Monday that the victims would still be alive if the recent escalation of tensions in the region had not happened, according to a transcript of an interview with Global News TV.

“I think if there were no tensions, if there was no escalation recently in the region, those Canadians would be right now home with their families,” Trudeau said in the interview.

Speaking on the sidelines of an official visit to Singapore on Monday, Vadym Prystaiko said the five nations would also discuss compensation and the investigation into the incident.

In Kiev, Ukraine’s top security official said a senior Iranian investigator would visit the Ukrainian capital in the coming days to determine whether a Ukrainian laboratory is suitable to decode the plane’s black box flight recorders.

Prystaiko said suggestions from Iran that the plane was shot down as it flew near a sensitive military base during a time of heightened tensions were “nonsense”.

“We have created this group of foreign ministers from the grieving nations. On Jan 16, we will meet in person in London to discuss the ways, including legal, how we are following this up, how we are prosecuting them (Iran),” Prystaiko said.

He said the five nations also included Canada - which had at least 57 passport holders aboard the doomed flight - Sweden, Afghanistan and a fifth country which he did not name. Canada has previously said these four countries and Britain had established a coordination group to support victims’ families.

Many on board were Iranians with dual citizenship.

Trudeau said Canada did not receive a heads up before the United States killed Soleimani, and that he “obviously” would have preferred one.

“The US makes its determinations. We attempt to work as an international community on big issues. But sometimes countries take actions without informing their allies,” he said.

Trudeau said that while the government was working as quickly as possible to bring the bodies home for burial, it was likely to take weeks or “perhaps even months.”

Canada said on Monday that Iran had signaled that Canadian investigators would take an active role in the probe of the crash, which Iran said at the weekend had been caused by a missile it fired in a “disastrous mistake.”

Tehran said its air defenses were fired in error while on alert after Iranian missile strikes on US targets in Iraq, and that the airliner was mistaken for a “hostile target” after it turned toward a sensitive military base of the elite Revolutionary Guards near Tehran.

“This is nonsense because our plane was recorded and confirmed - was going within the international route which was given by the dispatchers...Nothing was extraordinary,” Prystaiko said, adding that investigators said the pilot’s last words were “everything is ok on board and I am switching to auto pilot.”

“I have seen this information on media that our plane changed the route...Yes, because it was hit by rocket! It was already dying.”

Oleksiy Danylov, secretary of Ukraine’s national security and defense council, told Reuters in Kiev that Iran would have the final say on where the black box recorders would be decoded.

Danylov also offered an explanation for an early source of confusion: a statement issued by Ukraine’s embassy in Iran on the day of the crash that initially pointed to engine failure as the cause.

The statement, which was deleted later that day and replaced with another statement saying the cause was unknown, had been issued to try to gain access to the crash site, Danylov said.

“If we had said straight away that they had shot it down, I am not sure they would have let us go to the wreckage at all, let us do what we were doing,” he said.