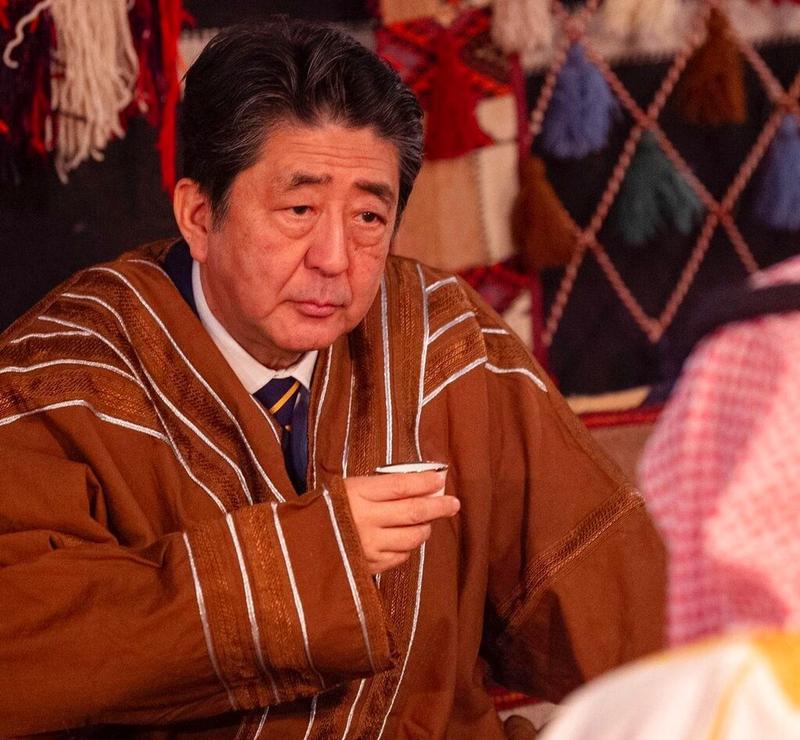 In this Jan 12, 2020 photo released by Saudi Press Agency, SPA, Japan's Prime Minister Shinzo Abe wears a traditional Saudi robe, as he drinks Arabic coffee inside a tent in the northwestern desert region of Al-Ula, which the kingdom is touting as a tourism destination, north of Medina, Saudi Arabia. (PHOTO / AP)

ABU DHABI — Japan, Saudi Arabia and the United Arab Emirates should work together to de-escalate the tense situation in the Gulf, a Japanese foreign ministry official said on Monday, relaying comments by Prime Minister Shinzo Abe.

The official said Japan's strong relationship with both the United States and Iran enabled it to play a diplomatic role in defusing heightened regional tensions following the US killing of Iranian military commander General Qassem Soleimani and a retaliatory missile attack by Iran on US forces in Iraq.

Abe met UAE leaders in Abu Dhabi on Monday after having been to Saudi Arabia on Sunday. He will head to Oman on Tuesday

As part of a Middle Eastern tour, Abe met UAE leaders in Abu Dhabi on Monday after having been to Saudi Arabia on Sunday. He will head to Oman on Tuesday, whose ruler, Sultan Qaboos, died on Friday.

Abe will "compare notes with the leaders of the three countries who we believe are like-minded in the sense that they are all worried about the extremely high tension in the region and the need for...de-escalation," the official said.

READ MORE: Japan PM heading to Mideast as planned ahead of SDF dispatch

Sheikh Mohammed said the UAE was willing to work with Japan and Saudi for regional stability.

In turn, Abe said he appreciated the "discrete position" the UAE has been demonstrating in the current situation.

In May and June 2019, several attacks took place on international merchant vessels in the Gulf, including the Japanese-owned tanker Kokuka Courageous, which the United States blamed on Iran. Tehran denies the allegations.

The UAE did not lay blame on any country for those attacks or other attacks on Saudi Arabian energy infrastructure.

Japan's Cabinet last month approved the deployment of a warship and patrol planes to the region and on Friday ordered them to head to the Middle East to protect ships bringing goods to Japan.

They are for self-defence and have a mandate of "information collection", the official said.