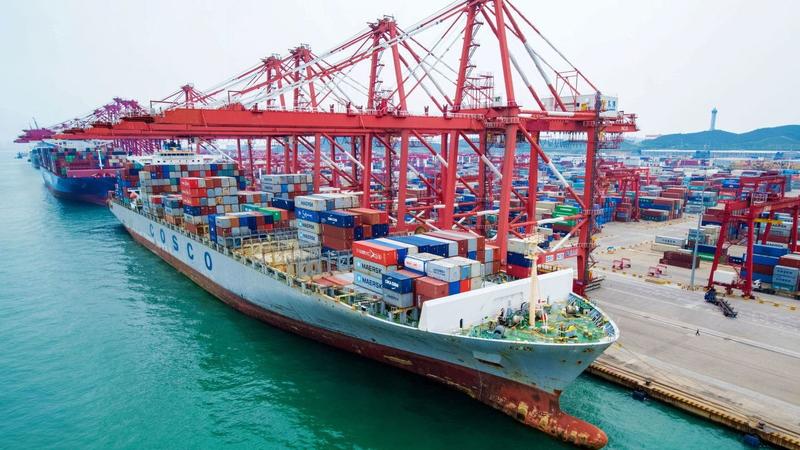 In this undated photo, containers are off-loaded from a cargo ship at Qingdao Port in East China's Shandong province. (PHOTO / IC)

BEIJING - Private firms overtook foreign-funded enterprises for the first time as the biggest contributor of China's foreign trade, which rose 3.4 percent in 2019 to 31.54 trillion yuan (about US$4.6 trillion), customs data showed Tuesday.

"Based on our initial analyses, China is expected to remain the largest trading country in the world in 2019," said Zou Zhiwu, deputy head of the GAC.

In December alone, the country's foreign trade jumped 12.7 percent from the same period of 2018 to a monthly record of 3.01 trillion yuan, with exports up 9 percent and imports up 17.7 percent to new monthly highs.

The December uptick could be attributed to factors including rising demand for imports from recovering manufacturing activities, rising prices of major commodities worldwide and growing confidence buoyed by the progress relating to trade consultations between China and the United States, said Huang Guohua, an official with the GAC.

Firstly, private enterprises overtook foreign-funded enterprises as the biggest contributor for the first time. The aggregate imports and exports generated by China's private firms went up 11.4 percent year-on-year to 13.48 trillion yuan (about US$1.95 trillion).

The number accounted for 42.7 percent of the country's total, up 3.1 percentage points from 2018, according to the GAC.

The number of private enterprises with foreign trade transactions reached 406,000 in 2019, up 8.7 percent from one year earlier, Zou said

The number of private enterprises with foreign trade transactions reached 406,000 in 2019, up 8.7 percent from one year earlier, he said.

Thanks to the Belt and Road Initiative and their comparative advantages in costs, private companies in the central and western regions of China outperformed their peers on the east coast, Zou noted.

The foreign trade generated by private firms in central and western areas surged 28.3 percent and 22.4 percent, respectively, 19.5 percentage points and 13.6 percentage points higher than that of the eastern region.

Another notable change that Zou noted was ASEAN's rise to become China's second-largest trading partner in 2019 with 4.43 trillion yuan in trade volume with China.

Thirdly, the country's trade mix continued to improve in 2019, with general trade taking up a larger share. General trade, growing 5.6 percent year-on-year, accounted for 59 percent of the total trade, 1.2 percentage points higher over one year ago.

Electrical products, electronics and machinery accounted for 58.4 percent of the country's exports in 2019 with 10.06 trillion yuan in trade volume, up 4.4 percent year-on-year.