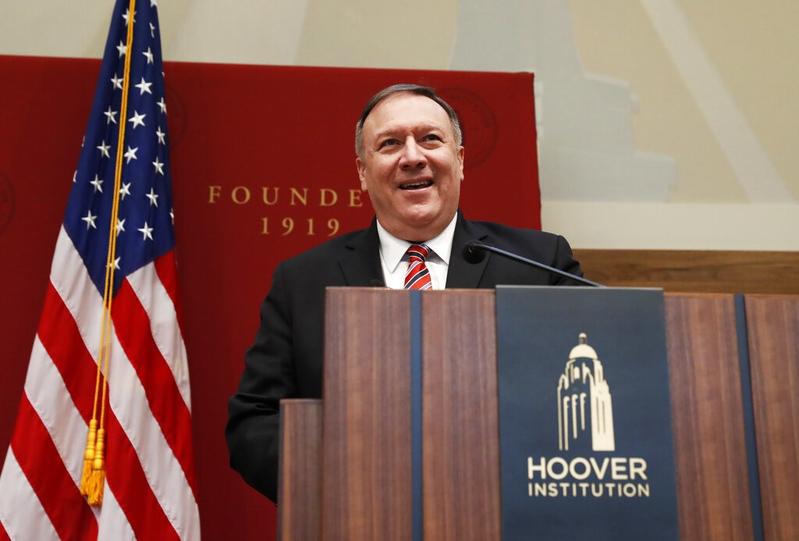 US Secretary of State Mike Pompeo speaks during an event hosted by the Hoover Institution at Stanford University in Stanford, California, Jan 13, 2020. (JOHN G. MABANGLO / POOL PHOTO VIA AP)

WASHINGTON - US Secretary of State Mike Pompeo on Monday said Qassem Soleimani was killed as part of a broader strategy of deterring challenges by US foes that also applies to Russia, further diluting the assertion that the top Iranian general was struck because he was plotting imminent attacks on US targets.

In his speech at Stanford University's Hoover Institute, Pompeo made no mention of the threat of imminent attacks planned by Soleimani. It only was in response to a question that he repeated his earlier assertion that pre-empting such plots was the reason for the Jan 3 American drone strike on Iran's second most powerful official.

The importance of deterrence isn't confined to Iran. In all cases, we must deter foes to defend freedom. That's the whole point of President Trump's work to make our military the strongest it's ever been.

Mike Pompeo, US secretary of state

His speech, "The Restoration of Deterrence: The Iranian Example," focused on what he called an administration strategy to establish "real deterrence" against Iran following earlier Republican and Democratic policies that encouraged Tehran's "malign activity."

Democratic and some Republican lawmakers have challenged the administration over the self-defense rationale supported by undisclosed intelligence over imminent attacks. US President Donald Trump has said the potential targets included four US embassies.

On Sunday, Defense Secretary Mark Esper said he had seen no intelligence forewarning of imminent attacks on embassies.

Trump on Monday added new fuel to the controversy by saying "it really doesn't matter" whether Soleimani posed an imminent threat.

Pompeo said there was "a bigger strategy" behind the killing of Soleimani, the commander of the Quds Force, Iran's elite foreign espionage and paramilitary force.

"President Trump and those of us in his national security team are re-establishing deterrence – real deterrence ‒ against the Islamic Republic of Iran," he said.

"Your adversary must understand not only that you have the capacity to impose cost but that you're in fact willing to do so," Pompeo said, adding that the 2015 Iranian nuclear deal from which Trump withdrew in 2018 had emboldened Tehran.

"America now enjoys the greatest position of strength regarding Iran we've ever been in," he said, pointing to the damage done to the Iranian economy by US sanctions that Trump re-imposed following his withdrawal from the nuclear deal.

"The importance of deterrence isn't confined to Iran," Pompeo said. "In all cases, we must deter foes to defend freedom. That's the whole point of President Trump's work to make our military the strongest it's ever been."

He cited the resumption of lethal military aid to Ukraine for defense against Russia-backed separatists, Trump's withdrawal from an arms control accord with Moscow and tests of a new US intermediate-range cruise missile.