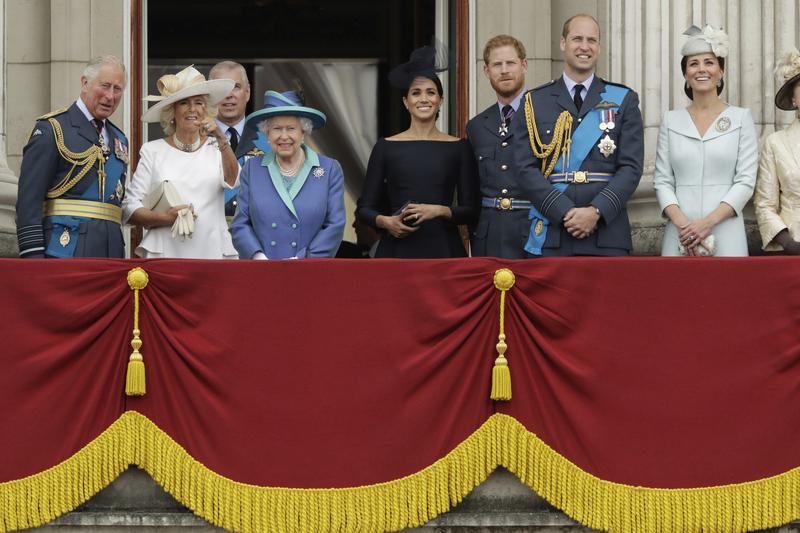 In this July 10, 2018 file photo, members of the royal family gather on the balcony of Buckingham Palace, with from left, Prince Charles, Camilla the Duchess of Cornwall, Prince Andrew, Queen Elizabeth II, Meghan the Duchess of Sussex, Prince Harry, Prince William and Kate the Duchess of Cambridge, as they watch a flypast of Royal Air Force aircraft pass over Buckingham Palace in London. In a statement issued on Jan 13, 2020, Queen Elizabeth II says she has agreed to grant Prince Harry and Meghan their wish for a more independent life that will see them move part-time to Canada. (MATT DUNHAM / AP)

SANDRINGHAM — Queen Elizabeth has reluctantly agreed to her grandson Prince Harry and his wife Meghan’s wish for a more independent future after the British royal family held crisis talks on Monday to resolve a widening rift among the Windsors.

Harry and his American actress wife will now begin a “period of transition” that will see them split their time between Britain and Canada as they also seek a lifestyle less encumbered by royal duties and to end their reliance on public funding.

It comes after what the 93-year-old queen described as “very constructive discussions” between herself, Harry, his elder brother Prince William and his father and heir to the British throne, Prince Charles, at the monarch’s rural Sandringham estate in eastern England.

A final decision on the future of the couple, officially the Duke and Duchess of Sussex, will be determined in days, she said in a statement.

“My family and I are entirely supportive of Harry and Meghan’s desire to create a new life as a young family,” Elizabeth said.

“Although we would have preferred them to remain full-time working members of the Royal Family, we respect and understand their wish to live a more independent life as a family while remaining a valued part of my family.”

The statement was highly unusual both in its informal tone and its personal nature, addressing the couple by name rather than by their titles.

Meghan, who is currently in Canada with their infant son Archie, had been expected to join Monday’s discussion by telephone.

The royal crisis was triggered when Harry, 35, and Meghan, 38, publicly announced last week that they wished to step back from royal duties and spend more time in North America.

Although there had been initial discussions about their future, neither the queen nor Charles were consulted beforehand, a step seen as hurtful and premature by a family whose roots go back through a thousand years of European history

It also exposed suspected divisions in the Windsor family and prompted soul-searching over what it means to be royal in the 21st century. 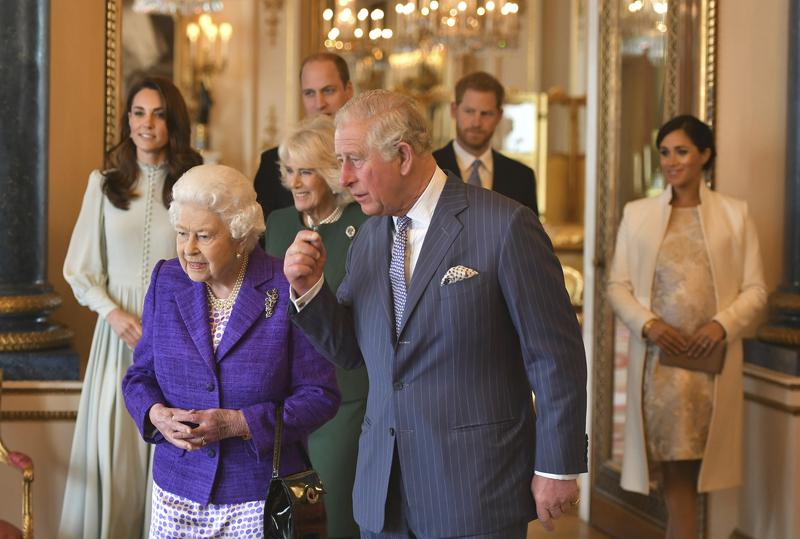 In this March 5, 2019 file photo, Britain's Queen Elizabeth II is joined by Prince Charles, the Prince of Wales, and at rear, from left, Kate, Duchess of Cambridge, Camilla, Duchess of Cornwall, Prince William, Prince Harry and Meghan, Duchess of Sussex during a reception at Buckingham Palace, London to mark the 50th anniversary of the investiture of the Prince of Wales. In a statement issued on Jan 13, 2020, Queen Elizabeth II says she has agreed to grant Prince Harry and Meghan their wish for a more independent life that will see them move part-time to Canada. (DOMINIC LIPINSKI / POOL VIA AP)

Harry and Meghan say they want a “progressive” new role for themselves and financial independence. As one of the world’s most glamorous couples, they have also made clear that they were struggling with the intense media scrutiny.

Last year, they announced legal action against a British tabloid, and Harry said papers had been bullying his wife in a way reminiscent of the hounding his mother Princess Diana had suffered before her death in a Paris car crash in 1997.

But it is unclear how they will pull off a partial pullback from royal roles - which some media have dubbed “Megxit” in a play on Britain’s tortuous Brexit departure from the European Union - or who will pay for a transatlantic lifestyle.

Currently, they are mainly funded by money from Prince Charles’s Duchy of Cornwall estate as their royal roles have precluded them seeking personal incomes.

“These are complex matters for my family to resolve, and there is some more work to be done, but I have asked for final decisions to be reached in the coming days,” the queen said in her statement.

Canada’s Prime Minister Justin Trudeau said most Canadians are very supportive of having the royals in the country. “But how that looks and what kind of costs is involved, there is still lots of discussions to have,” Trudeau told Global News in a television interview.

There are no provisions in Canada’s Citizenship Act that confer Canadian citizenship status to members of the royal family by virtue of their status as a member of the monarchy, Canada’s immigration department said in an emailed statement.

To become legal permanent residents of Canada, they would need to apply through normal immigration processes, the statement added.

Prince Charles, 71, has long sought a leaner royal family, but it is unclear how Harry and Meghan would fit into that model - especially if they essentially become Hollywood superstars.

In trying to resolve the crisis, the most powerful members of the so-called royal “Firm” are aware that the final outcome could shape the monarchy’s future.

Elizabeth has served the country loyally since ascending the throne in 1952, earning the respect and admiration of most Britons, including many republicans, but the family has also sometimes faced accusations of being aloof and out of touch.

The breakdown in royal relations has dominated the British media for days, with newspapers running a host of stories, based on quotes from unidentified royal insiders, about a split between Harry and William, the Duke of Cambridge, and anger at the top of the family amid suspicion of leaks and ostracism.

In a sign of the tensions, Harry and William issued a rare public statement on Monday to denounce a report by the Times newspaper based on an unnamed source which said Harry and Meghan had been pushed away by “a bullying attitude” from William who had not been welcoming to Meghan.

“Despite clear denials, a false story ran in a UK newspaper today speculating about the relationship between The Duke of Sussex and The Duke of Cambridge,” the statement said.

“For brothers who care so deeply about the issues surrounding mental health, the use of inflammatory language in this way is offensive and potentially harmful.”

The furor over the couple, who married in May 2018 in a glittering ceremony watched by millions round the world, comes after a tough 2019 for the royal family.