US, ROK agree 'in principle' on sharing troop cost 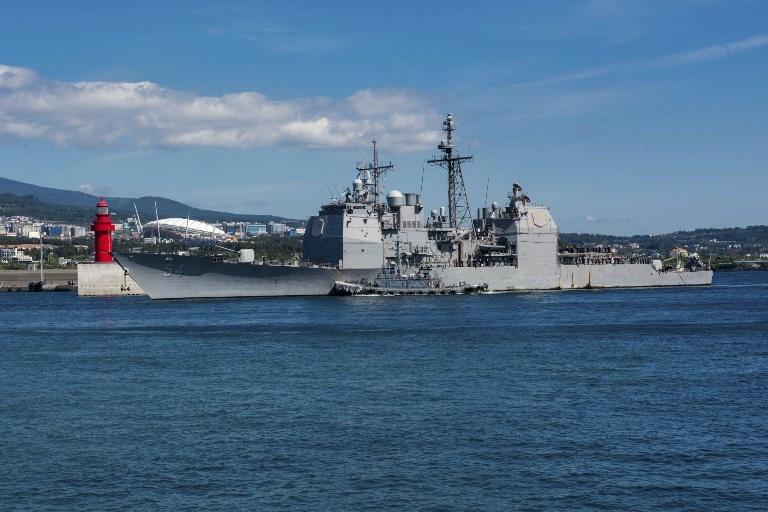 This US Navy photo obtained Oct 23, 2018 shows the Ticonderoga-class guided-missile cruiser USS Antietam (CG 54)as it pulls in to port at the Republic of Korea (ROK) Navy base in Jeju, ROK on Oct 12, 2018. (WILLIAM CARLISLE / US NAVY / AFP)

WASHINGTON - The United States and the Republic of Korea (ROK) have reached an agreement "in principle" on sharing the cost of stationing US troops in the Asian country, the US State Department said Monday.

Under the revised pact, ROK would boost its financial contribution to nearly US$1 billion, CNN reported

"The United States and the Republic of Korea have reached an agreement in principle on a new Special Measures Agreement," a spokeswoman said. "Both sides are committed to working out remaining technical issues as quickly as possible."

CNN quoted a State Department official as saying that under the revised agreement, ROK would boost its financial contribution to nearly US$1 billion.

The 2014 deal that expired last year required Seoul to pay about 960 billion won (US$848 million) a year for keeping some 28,500 US troops in the ROK. The allies had appeared unable to strike an accord to renew the deal despite ten rounds of talks since March.

US President Donald Trump has repeatedly said that ROK, where the United States has stationed soldiers since the 1950-53 Korean War, should bear more of the cost.

ROK news agency Yonhap earlier quoted a diplomatic source in Seoul as saying that Washington appeared set to accept ROK's request to contribute under US$1 billion in 2019, and that the agreement would run for a year as opposed to a previous five-year deal.

Yonhap said the two sides were expected to seal the deal as early this week. Its source attributed the compromise to the allies' efforts to focus on diplomacy with the Democratic People's Republic of Korea (DPRK) ahead of a second US-DPRK summit planned for later this month.

ROK officials have said Seoul had sought to limit its share to $1 trillion won (US$891 million) and make the agreement valid for at least three years.

A senior legislator in ROK's ruling party said last month that negotiations were deadlocked after the United States made a "sudden, unacceptable" demand that ROK pay more than 1.4 trillion won (US$1.25 billion) per year.

About 70 percent of Seoul's contribution covers the salaries of some 8,700 ROK employees who provide administrative, technical and other services for the US military.

The US military warned Korean workers on its bases they might be put on leave from mid-April if no deal was reached.

Trump announced a halt to joint exercises with ROK in June after his first meeting with DPRK leader Kim Jong-un, saying they were expensive and paid for mostly by the United States.

Major joint exercises have been suspended, which Washington said would expedite talks aimed at getting DPRK to give up its nuclear program, but some small-scale drills have continued.