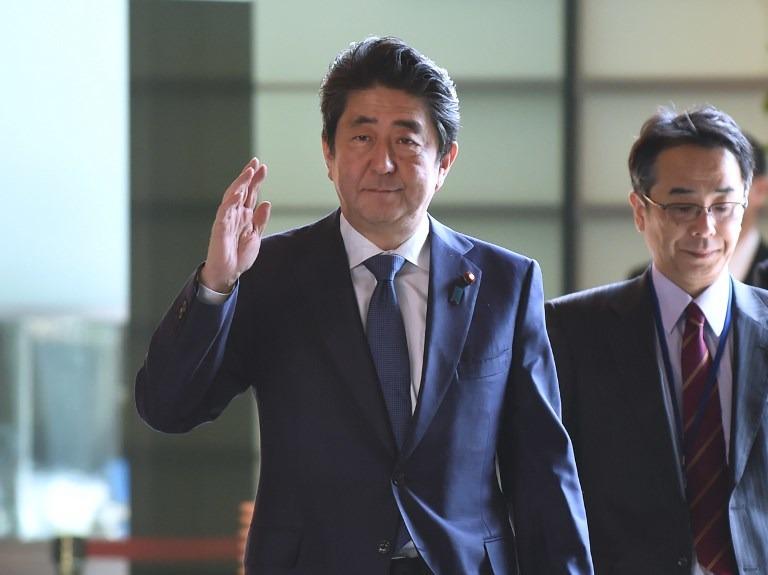 TOKYO - Japanese Prime Minister Shinzo Abe, his ratings battered by a scandal over suspected cronyism, is hoping a series of summits including one with US President Donald Trump will restore his popularity ahead of a crucial ruling party leadership contest.

"Mr Abe is the most pro-active on foreign policy among Japanese prime ministers and wants to use that," a ruling coalition lawmaker told Reuters.

"Especially ahead of the September Liberal Democratic Party (LDP) presidential election, he wants to appeal to voters through his meetings with Trump and Putin."

Abe's ratings have fallen sharply due to the scandal over the sale of state-owned land to school operator Moritomo Gakuen, to which Abe's wife had ties, and after a finance ministry admission that documents about the deal were altered.

The slide in his ratings has clouded his prospects of winning a third, three-year term as LDP president, victory in which would set him on track to become Japan's longest-serving premier, a position he's held since 2012.

The LDP leader is virtually assured of being prime minister since an LDP-led coalition holds a majority in parliament.

Abe is hoping his diplomatic performance will distract voters from the domestic scandal.

"He's trying to change the conversation and the chances are it will work," said Gerry Curtis, an emeritus professor at New York's Columbia University.

But much depended on opinion polls and whether new allegations of misconduct emerged, Curtis added.

'NO RISK, NO RETURN'

In addition, success at summits is by no means guaranteed.

"Of course, there are risks," the coalition lawmaker said. "Politics is a world of 'no risk, no return'."

Trump has blindsided Tokyo twice in recent weeks, first by announcing that he would meet Kim Jong-un and then by declining to exclude ally Japan from tariffs on steel and aluminum.

Japanese Foreign Minister Taro Kono told Reuters on Tuesday that the two allies were "completely in sync" on the DPRK but concerns persist that Trump may do a deal that protects US interests but leaves Japan vulnerable.

On the trade front, Tokyo is pressing Washington to exempt Japan's steel products from the levies and pushing back against demands for a two-way free trade agreement, a stance the government repeated forcefully on Thursday.

Abe may have little concrete to offer Trump on trade other than restating plans, already in the works, to boost defense spending and buy US military equipment.

The Japanese leader may also find it tough to get concessions from Putin in a decades-old row over islands seized by Soviet forces at the end of World War Two. The dispute has kept Moscow and Tokyo from signing a peace treaty.

"Putin is just playing the game," a former senior Japanese diplomat said, while adding that even a small breakthrough in the dispute would be a "great success" for Abe.

Any meeting between Abe and Kim Jong-un would be tricky, and forecasts that one will happen are premature, another ruling party lawmaker said.

To gain kudos, Abe needs progress on the emotive issue of Japanese citizens abducted by the DPRK decades ago, but the DPRK would likely want economic aid in return.

Japan's stance, however, has been that aid can only be resumed if the two countries normalize diplomatic relations, which depends on the North abandoning its nuclear and missile programs as well as resolving the abductee issue.