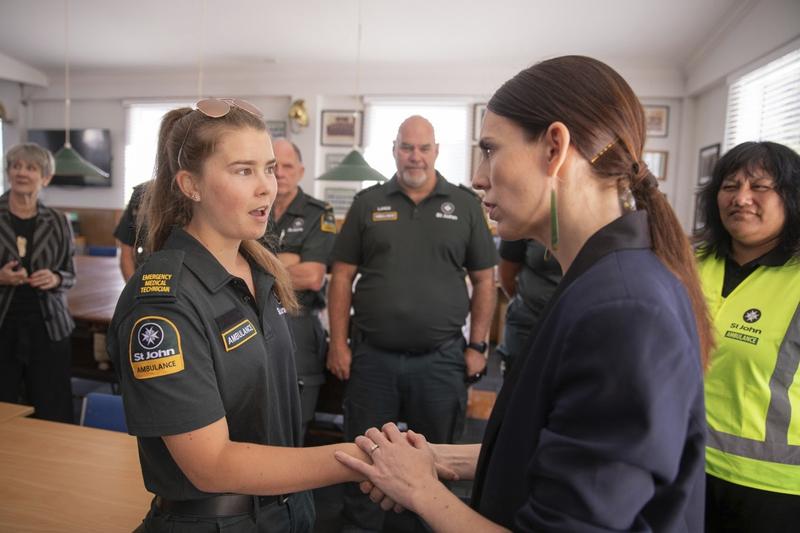 WHAKATANE — Survivors of a powerful volcanic eruption in New Zealand ran into the sea to escape the scalding steam and ash and emerged covered in burns, say those who first helped them.

The accounts Tuesday came as some relatives were forced to continue waiting for news of their loved ones, with authorities deciding it remained too dangerous for crews to land on the island and remove bodies.

Six deaths were confirmed after Monday's eruption of the White Island volcano. Five people died at the time of the blast or soon after, while a sixth person died Tuesday night at an Auckland hospital.

Another eight people are believed to have died, with their bodies remaining on the ash-covered island for now

Another eight people are believed to have died, with their bodies remaining on the ash-covered island for now.

Experts said there was a 50 percent chance of another small eruption within a day and rescue teams didn't want to take any chances. Police said they planned to send up drones to measure whether gas levels were safe.

The tragedy will have an ongoing effect on the town of Whakatane, which road signs tout as the gateway to White Island. As well as being an important tourist draw for the 20,000 people who live here, the volcano has an almost mystical significance, its regular puffing a feature of the landscape.

Whether the island will ever host tourists again remains uncertain after the horrific tragedy that unfolded when the volcano exploded a little after 2 pm Monday.

Geoff Hopkins was in a boat offshore after visiting the island with his daughter, the tour a 50th birthday present for him. He told the New Zealand Herald the eruption at first looked beautiful but quickly turned menacing.

As injured people were transported onto their boat screaming in pain, Hopkins and his daughter Lillani poured fresh water onto them, cut them out of their clothes and tried to keep them calm.

He told the Herald they were “horrifically" burned on their exposed skin and faces, even under their clothes.

In all, police believe there were 47 visitors on the island at the time. They say 24 were Australian, nine were American and five were New Zealanders. Others were from Germany, Britain, China and Malaysia. Many were passengers aboard the Royal Caribbean cruise ship Ovation of the Seas.

About 30 of the survivors remained hospitalized on Tuesday, many flown to burn units around the country. The first confirmed death was of a local man, Hayden Marshall-Inman, a guide who had shown tourists around the island.

Former Whakatane Mayor Tony Bonne said Marshall-Inman was a keen fisherman and well-liked. He was so kind, Bonne said, that he would often leave extra money at the grocery store for those he knew were struggling to pay. 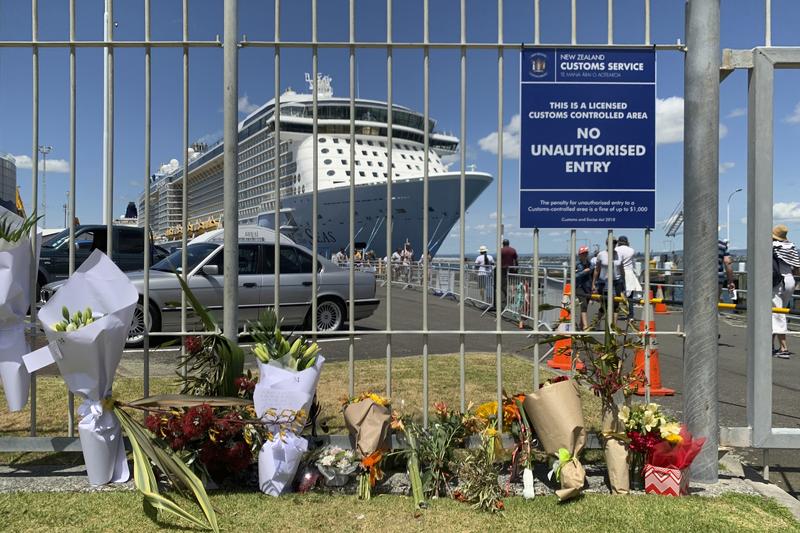 Flowers are laid on makeshift memorial is seen in front of cruise ship Ovation of the Seas, in Tauranga, New Zealand, Dec 10, 2019. A volcanic island in New Zealand erupted Dec 9 in a tower of ash and steam while dozens of tourists were exploring the moon-like surface, killing multiple people and leaving many more missing.( NICK PERRY / AP)

Many people were left questioning why tourists were still allowed to visit the island after seismic monitoring experts raised the volcano's alert level last month.

“These questions must be asked and they must be answered,” Prime Minister Jacinda Ardern said in Parliament.

New Zealand's Deputy Police Commissioner John Tims said Tuesday that police were opening a criminal investigation into the deaths that would accompany an investigation by health and safety regulators.

But hours later, police put out a statement saying that while they were investigating the deaths on behalf of the coroner, “To correct an earlier statement, it is too early to confirm whether there will also be a criminal investigation.”

Australian Prime Minister Scott Morrison said 11 Australians are unaccounted for and 13 were hospitalized. Three Australians were suspected to be among the initial five confirmed dead, he told reporters in Sydney. “I fear there is worse news to come,” Morrison said.

ALSO READ: At least one Chinese national among those injured in NZ

Relatives of a newlywed American couple say the husband and wife were severely burned. Barbara Barham told The Washington Post that her daughter Lauren Urey, 32, and son-in-law Matthew Urey, 36, from Richmond, Virginia, were on a honeymoon trip.

A few locals laid flowers Tuesday at a fence on the waterfront near where the rescue boats had returned with the injured.

White Island, also known by the indigenous Maori name Whakaari, is the tip of an undersea volcano about 50 kilometers off New Zealand's main North Island.

New Zealand's GeoNet seismic monitoring agency had raised the volcano's alert level on Nov 18 from 1 to 2 on a scale where 5 represents a major eruption, noting an increase in sulfur dioxide gas, which originates from magma. It also said volcanic tremors had increased from weak to moderate strength. It raised the alert level to 4 for a time after Monday's eruption but lowered it to 3 as the activity subsided.

Richard Arculus, an Australian National University volcanologist who has made numerous visits to White Island, said the eruption likely sent a ground-hugging lateral blast from the crater to the jetty, as well as blasting rock and ash vertically skyward.

“In that crater, it would have been a terrible place to be,” Arculus said. "There would have been nowhere safe for you to be hiding, thinking that, ‘Oh well, if it explodes, it just goes straight up in the air.’”

At least 10 people were killed on the island in 1914 when it was being mined for sulfur. Part of a crater wall collapsed and a landslide destroyed the miners' village and the mine itself.

The island became a private scenic reserve in 1953, and daily tours allow more than 10,000 people to visit every year.

“Tourism has been a growing market, and White Island has been an anchor for that,” Bonne said. “It's something unique that pulls people from all around the world."

He said it was sad to think that might all now come to a stop.