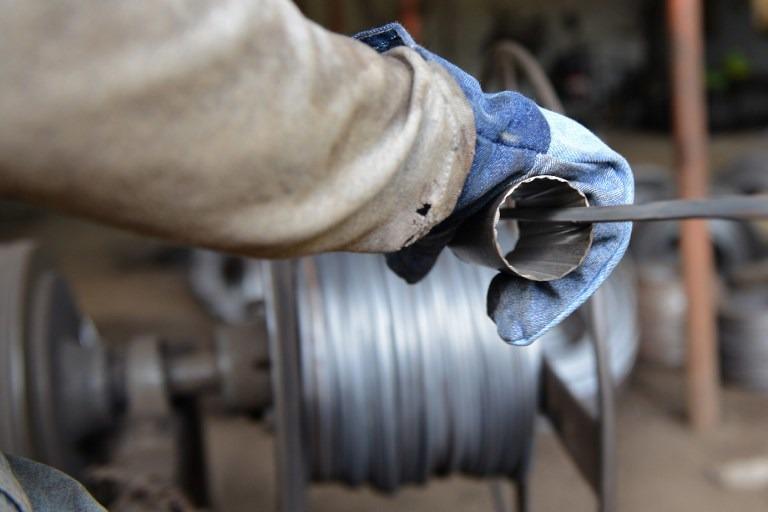 An Indian worker prepares steel wires from scrap steel strips at a factory in Viramgam, some 60 km from Ahmedabad in western India on Nov 16, 2014. (SAM PANTHAKY / AFP)

Fears of an escalating trade war hit the share prices of Asian steelmakers and manufacturers supplying US markets, particularly hard on Friday following a rough night on Wall Street.

Fears of an escalating trade war hit the share prices of Asian steelmakers and manufacturers supplying US markets, particularly hard

Trump said the duties of 25 percent on steel and 10 percent on aluminum would be formally announced next week, although White House officials later said some details still needed to be ironed out.

"The imposition of a tariff like this will do nothing other than distort trade and ultimately, we believe, will lead to a loss of jobs," Australian trade minister Steven Ciobo told reporters in Sydney.

"My concern remains that on the back of actions like this we could see retaliatory measures that are put in place by other major economies. That is in no-one's interest."

Australia, which has championed the free-trade Trans Pacific Partnership that Trump pulled the United States out of, has sought an exemption for its steel and aluminium to the United States, Ciobo added.

Steel has become key focus for Trump, who pledged to restore the US industry and punish what he sees as unfair trade practices.

South Korea, the third-largest steel exporter to the United States after Canada and Brazil, said it will keep talking to US officials until Washington's plans for tariffs are finalised.

"For us, the worst case scenario was a 54 percent tariff," said a South Korean trade ministry official who declined to be named as he was not authorised to speak to media. "Still, if the option for a global tariff of at least 24 percent is taken, that will still affect our steel exports to the US."

South Korean trade minister Kim Hyun-chong has been in the United States since Feb 25, the trade ministry said. Kim has met US Commerce Secretary Wilbur Ross and other officials to raise concerns over the so-called Section 232 probe and consider a plan that would minimise the damage to South Korean companies.

Asian steelmakers fear US tariffs could result in their domestic markets becoming flooded with steel products that havenowhere else to go.

"We are concerned about how other exporters react, what will happen with steel that cannot be sold to the US,” Vikrom Wacharakrup, Chairman of Iron and Steel Industry Group, Federation of Thai Industries, told Reuters. Thailand exports steel mainly to Asia but also the United States.

The Trump administration also cited national security interests for its action, saying the United States needs domestic supplies for its tanks and warships.

Contrary to the action announced by Trump on Thursday, the Department of Defense had recommended targeted steel tariffs anda delay in aluminum duties.

"We continue to seek clarification," said Japanese Trade and Industry Minister Hiroshige Seko. "I don’t think exports of steel and aluminum from Japan, which is a US ally, damages US national security in any way, and we would like to explain that to the US."

India also raised concerns about the use of the national security interests provisions.

"We have only 2 percent of our exports to US so no immediate dent, but validity of Section 232 is stretched to be used as tariff barrier," India's Steel Secretary Aruna Sharma told Reuters.

Trump believes the tariffs will safeguard American jobs but many economists say the impact of price increases for consumers of steel and aluminum, such as the auto and oil industries, will be to destroy more jobs than they create.

News of the tariffs hit sentiment on Wall Street due to the potential impact of higher costs on consumers and the potential for damaging tit-for-tat retaliation by affected countries.

Canada said Thursday that the steep US tariffs imposed by the United States on steel and aluminum imports were "unacceptable", vowing to take "responsive measures".
"As a key NORAD (North American Aerospace Defense Command) and NATO ally, and as the number one customer of American steel, Canada would view any trade restrictions on Canadian steel and aluminum as absolutely unacceptable," Canadian Foreign Minister Chrystia Freeland said in a statement.

Proposed US tariffs could affect ongoing trade talks on the automotive industry as part of the renegotiation of the North American Free Trade Agreement (NAFTA), a top business adviser to the Mexican government said on Thursday.
"It certainly is an issue because steel and aluminum are obviously part of the raw materials for automobiles, and for many of our manufactured products," said Moises Kalach, coordinator of the strategic advisory board to international negotiations at Mexico's Business Coordinating Council (CCE).