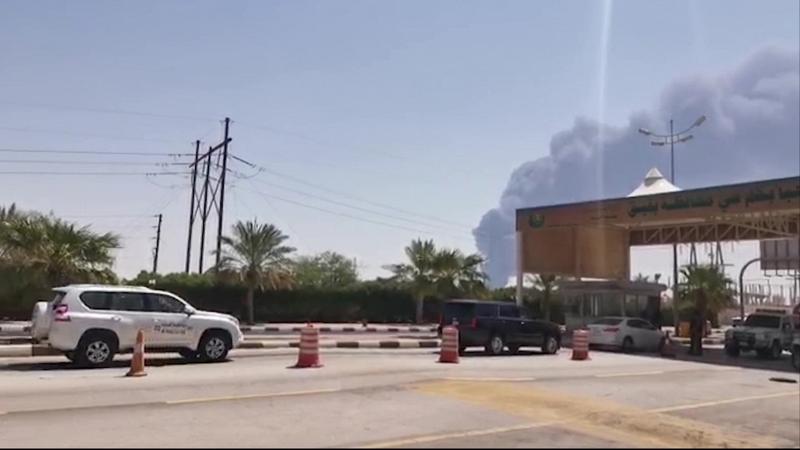 This AFPTV screen grab from a video made on Sept 14, 2019, shows smoke billowing from an Aramco oil facility in Abqaiq about 60km southwest of Dhahran in Saudi Arabia's eastern province. (PHOTO / AFP)

Saudi Arabia attempted to move beyond the worst oil disruption in its history, assuring the world that crude exports won’t suffer, its damaged facility has partially restarted and that production capacity will be back to normal within months.

The long-awaited update on Tuesday from the kingdom -- which before the strike pumped almost 10 per cent of the world’s oil -- gives the market much-needed clarity after days of speculation over how severe the damage was at Saudi Aramco’s Abqaiq plant.

However, progress has been slower than was initially expected and crude prices remain elevated as traders factor in higher risks for Saudi supply.

“During the two past days, we managed to contain the damage by recovering more than half of the production that we had lost during that terrorist attack,” Energy Minister Prince Abdulaziz bin Salman said at a briefing in Jeddah. “The company will be able to meet all its commitments to customers this month by drawing on its crude oil reserves.”

Abqaiq is now processing about 2 million barrels a day, Aramco Chief Executive Officer Amin Nasser said. The facility should return to pre-attack levels of about 4.9 million barrels by the end of September, he said.

Soon after the weekend attack, officials indicated that the majority of output would be restored within days, with weeks required to get back to full capacity. The outlook became more pessimistic in subsequent days as photos were released showing the scale of the damage at the crucial facility.

The minister and CEO assured customers Aramco’s crude exports won’t be reduced this month because it will draw down strategic reserves. The kingdom also temporarily reduced the rate at which domestic refineries process oil by about 1 million barrels a day, making more crude available for shipment overseas.

Still, figures provided by the energy minister suggested the kingdom will take months to fully recover from the incident. Full output capacity of 12 million barrels a day will only be available at the end of November, with about 11 million restored by the end of this month, said Prince Abdulaziz. Saudi Arabia aims to pump 9.8 million barrels a day in October, he said, in line with recent months.

Houthi rebels in Yemen initially claimed responsibility for the attacks, although the US later blamed Iran. The oil market has been gripped with uncertainty since the plant was hit. Brent crude fell 7.5 per cent to US$63.82 a barrel at 9:55 pm in London. The international benchmark jumped 15 per cent, the most on record, on Monday.

That historic price gain underscored the unprecedented nature of the disruption caused by the attack. For decades, Saudi Arabia has been the oil market’s great stabilizer, maintaining a large cushion of spare production capacity that can be tapped in emergencies, such as during the 2011 war in Libya.

The suspension of 5.7 million barrels day of Saudi production -- the worst sudden loss in history -- exposed the inadequacy of the rest of the world’s supply buffer. Aramco ramped up offshore fields to maximum to replace some lost production, Nasser said. Customers were also being supplied using stockpiles, though some buyers are being asked to accept different grades of crude, a person familiar with the matter said earlier this week.

Beyond the kingdom, other participants in the OPEC+ cuts, such as Russia, Kazakhstan and the United Arab Emirates, could restore a few hundred thousand barrels a day of idled production, but that’s not enough to offset Saudi losses. 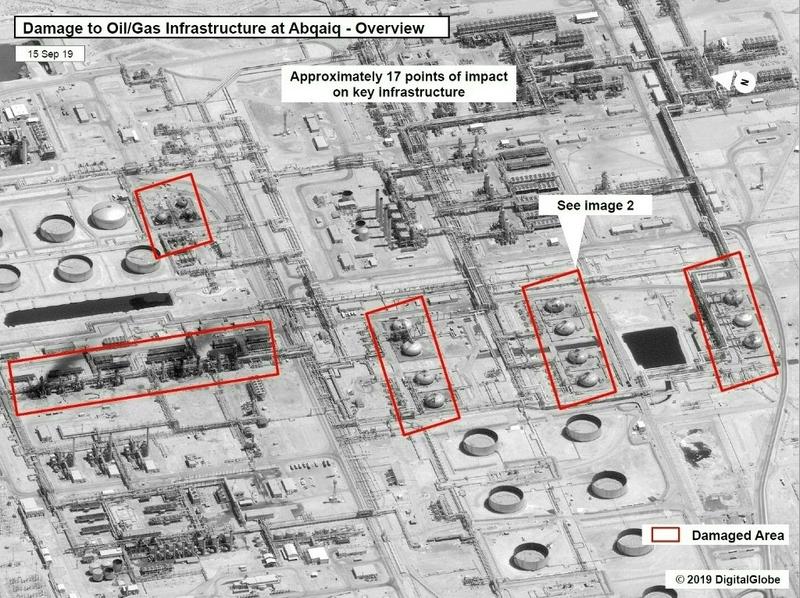 This satellite overview handout image obtained Sept 16, 2019 courtesy of the US Government shows damage to oil/gas infrastructure from weekend drone attacks at Abqaig on Sept 15, 2019 in Saudi Arabia. (PHOTO / AFP)

Even as Aramco fixes the damage at Abqaiq, the possibility of further escalation of conflict in the Middle East hangs over the market.

Even as Aramco fixes the damage at Abqaiq, the possibility of further escalation of conflict in the Middle East hangs over the market

Tehran and Riyadh are historic foes backing opposing sides in Yemen’s long-running civil war. The volatile situation in the region finally boiled over earlier this year as US President Donald Trump used sanctions to attempt to choke off all of Iran’s oil exports -- the lifeblood of its economy -- after unilaterally withdrawing from an international nuclear deal.

Since then, the Persian Gulf, source of about a third of the world’s seaborne oil exports, has been under siege, targeted by air, sea and land. While Trump has shown some reluctance to go to war, there are also few prospects for easing tensions as Saudi Crown Prince Mohammed bin Salman decides how to respond to the assault.

Prince Abdulaziz said he wouldn’t comment on whether Iran was responsible for the attack. The Pentagon is preparing a report on who was to blame and intends to make it public within 48 hours, a US defense official said Tuesday.

Houthi rebels in Yemen, who are backed by Tehran, said Monday that oil installations in Saudi Arabia will remain among their targets and their weapons can reach anywhere in the country. Iran’s supreme leader Ayatollah Ali Khamenei said Tuesday his country won’t negotiate with the US on any level.

The threat to key Saudi infrastructure has loomed over the planned initial public offering of Aramco. The state-run company will still be ready for a share sale any time in the next 12 months, Chairman Yasser Al Rumayyan said at the briefing.