Law proposed to protect the reputations of heroes 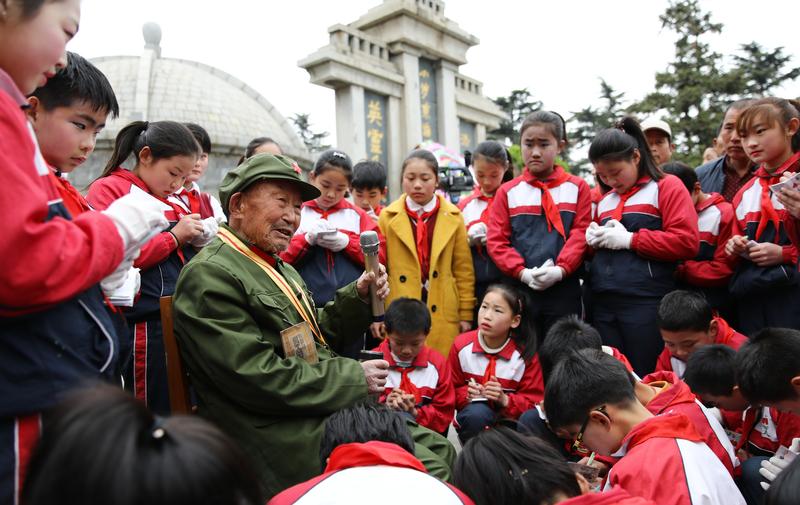 Ma Ruying, a veteran who fought in the War of Resistance Against Japanese Aggression (1931-45), shares his memories about the war with students at a cemetery in Lianyungang, Jiangsu province, on April 5, Tomb Sweeping Day. (SI WEI / FOR CHINA DAILY)

A revision to a draft law on national heroes and martyrs aims to prevent public behavior deemed to glorify Japan's invasion of China in the 1930s, lawmakers said on Wednesday.

Several incidents involving people in Japanese military uniforms taking selfies outside memorials and other locations associated with the War of Resistance Against Japanese Aggression (1931-45) have sparked anger in recent years.

Some were charged with disturbing public order. Yet a clause added to the latest draft law on protecting the reputation of Chinese heroes and martyrs would outlaw such behavior, opening the door to tougher penalties.

The draft was submitted for second review to the Standing Committee of the National People's Congress, the top legislature, on Wednesday.

The new clause mainly targets acts that glorify the Japanese invasion and invaders. It also clearly states that such behavior won't be tolerated

Hu Keming, vice-chairman of the NPC's Constitution and Law Committee, said behavior such as taking offensive selfies damages the dignity of the State, hurts people's feelings and has a negative effect on society. Legal consequences need to be further clarified and penalties increased, he said.

In a recent case, two men received 15-day administrative detentions for posing for pictures online dressed in Imperial Japanese military uniforms in front of a memorial site in Nanjing, Jiangsu province, in February.

Their actions generated widespread public anger as the site is where many Chinese lost their lives fighting Japanese aggression in 1937.

The two were punished in accordance with the Public Security Administration Punishments Law for a creating a disturbance.

"The new clause mainly targets acts that glorify the Japanese invasion and invaders. It also clearly states that such behavior won't be tolerated," said He Yun'ao, director of Nanjing University's Institute of Culture and Natural Heritage.

He is a member of the National Committee of the 13th Chinese People's Political Consultative Conference, the top political advisory body. He and several other members submitted a proposal asking the NPC during this year's annual meeting in March to clarify the legal responsibility for such acts.

Some people in China have slandered or denigrated heroes and martyrs via the internet, magazines and other media in recent years, in the name of "academic freedom", "restoring history" or "probing into details", the NPC Standing Committee said in a statement.

In addition to glorifying the Japanese invasion, the draft also added movies to the list of media through which people would be prohibited from insulting heroes and martyrs, joining radio and TV.

The revised draft also stipulates that network operators should respond quickly if they find messages harmful to heroes, and prevent such messages originating abroad from spreading in China.

Occupying, defacing and damaging martyrs' memorials will be strictly prohibited, the draft said.