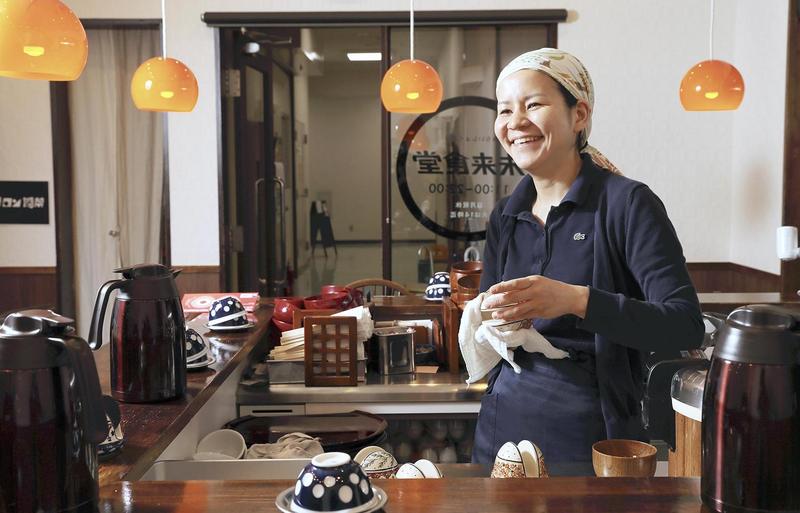 Sekai Kobayashi smiles as she polishes a cup in her restaurant, Mirai Shokudo, in Chiyoda Ward, Tokyo.

TOKYO - Sekai Kobayashi, a former engineer, now runs a unique eatery that helps people who don’t have money to pay for their meals. The Yomiuri Shimbun interviewed Kobayashi, 33, about why she opened Mirai Shokudo (Future eatery) and how she manages it. The following are excerpts from the interview.

My restaurant won’t turn away customers who are hungry and broke. Instead, we offer meals in return for 50 minutes of labor at the restaurant.

I use this system because I want to connect with hungry people who otherwise couldn’t eat at restaurants because they don’t have money.

I opened the restaurant two years ago in Tokyo’s Jinbocho district, aiming for “a place where everyone is welcome and everyone fits in.” Through various methods, I’ve also kept the business profitable.

I first dabbled in shop management as a university student. Each year at the university’s annual festival, I ran a dimly lit cafe stocked with books. As I wore a kimono at the time, I named the cafe Kimono Fushigi Toshokan (Kimono mysterious library).

The cafe won first prize in the festival popularity contest all four years I was a student. I even opened cafes at other school festivals.

After turning 20, I worked at a bar in Shinjuku’s Golden Gai — a district in Shinjuku Ward, Tokyo, known for its cozy bars and pubs — and other places. After graduating from university, however, I found a job through normal channels because the bar master advised, “It’s not so bad to experience the outside world,” which made sense to me.

After working as an engineer at IBM Japan Ltd., I moved to Cookpad Inc., which runs a cooking recipe site. The company had an in-office kitchen where everyone could prepare and eat meals.

My colleagues really liked the lunches I made for them. This led me to strongly consider opening my own restaurant.

Afterward, I received vocational training at a leading restaurant chain and other places before opening Mirai Shokudo.

Those looking for jobs might feel that making the wrong choice could ruin the rest of their lives. But it’s okay to change course later on. That’ll eventually lead you in a direction that you feel strongly about. That’s what happened for me with Mirai Shokudo.

Working as an engineer actually was not a waste of time. To manage my restaurant, I adopted an open-source model — a system through which software design is made available for free to the public so that everyone can improve upon it.

I posted the restaurant’s business plan and finances on its website so I can collect input from the public on how to make improvements. This information is also available for those who want to open their own restaurants.

Sharing something with others means supporting those with ambition. That underpins my approach to work.

Kobayashi was born in 1984 in Osaka Prefecture. She graduated from Tokyo Institute of Technology’s faculty of science. After working at various companies, she opened Mirai Shokudo in Chiyoda Ward, Tokyo, in September 2015.

There is no staff other than Kobayashi at Mirai Shokudo, which seats 12 at a counter. Customers have the option of paying for meals or earning a free meal by serving dishes, clearing tables and performing other tasks.

So far, more than 500 people, including university students, have opted to work for their meals to save money on lunch expenses, among other reasons.

Customers can monitor their work hours on the restaurant’s website, and first-time customers can read a work manual that helps them be efficient. Those who work for their meal can either dine for free or receive a free meal coupon that can be posted at the restaurant’s entrance for anyone to use.

A 56-year-old former teacher has regularly helped at the restaurant since the end of July in the hope of beginning a career in the food industry.

“It’s an exciting job, because I work with a new person every time. It’s interesting to develop a good rapport and work with others,” she said.