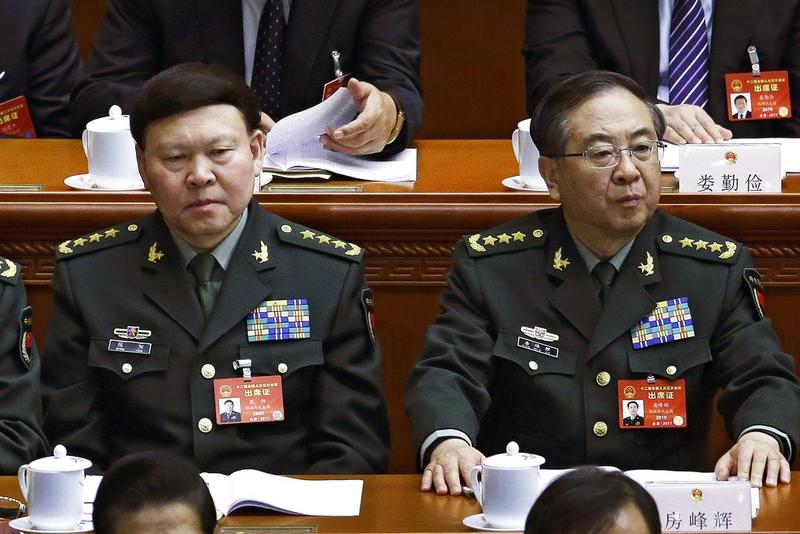 In this March 8, 2017 photo, Zhang Yang, left, the then-head of China's Central Military Commission (CMC) Political Work Department, and Fang Fenghui, the then-chief of staff of the CMC Joint Staff Department, attend the National People's Congress (NPC) at the Great Hall of the People in Beijing. The two former senior military officials have been expelled from the Communist Party of China. (ANDY WONG / AP)

BEIJING - A former chief of staff of China's Central Military Commission (CMC) and a senior military official have been expelled from the Communist Party of China (CPC).

The expulsion of Fang Fenghui, former member of CMC and former chief of staff of the CMC Joint Staff Department, was approved by the CPC Central Committee.

Fang was suspected of offering and taking bribes, and possessing a large amount of property from unidentified sources. In Zhang's case, he was expelled for multiple violations

The CMC has already expelled him from the People's Liberation Army and stripped him of his rank of general, according to a CMC statement on Tuesday.

"Fang severely violated political discipline, the political code of conduct, the eight-point frugality code of the CPC Central Committee and the regulations and discipline of the military," the statement reads.

He was suspected of offering and taking bribes and possessing a large amount of property from unidentified sources, which are "extremely serious violations involving a huge amount of assets and had caused an extremely bad influence," the CMC said.

Neither loyal nor honest to the CPC, Fang was found to "have been duplicitous, disintegrated politically and grown greedy economically, severely damaging the Party's cause and the image of the military," according to the statement.

The statement read that the investigation into Fang's case has concluded, and the case will be transferred to a judiciary committee for prosecution.

Another senior official Zhang Yang, who was a former member of the Central Military Commission (CMC) and former head of the CMC Political Work Department, was expelled for multiple violations.

The property involved in Zhang's case will be confiscated in accordance with laws and disciplines, read the statement.

The CMC had previously decided to expel Zhang from the military and strip him of his rank of general, it read.

Zhang committed suicide at his home in Beijing on Nov 23, 2017, after authorities launched an investigation into his links to two corrupt former senior military figures Guo Boxiong and Xu Caihou.

READ MORE: Chinese military to be subject to stricter discipline

Upon the approval of the CPC Central Committee, the CMC has conducted an investigation of Zhang's case.

The investigation found that Zhang had violated the Party's political discipline and rules, organizational discipline, and discipline on upholding integrity, as well as national laws and regulations.

He was also suspected of offering and accepting bribes and holding a huge amount of property from unidentified sources, read the statement, describing Zhang's case as "extremely serious" with "extremely vile" influences.

Disloyal to and dishonest with the Party, Zhang was a person of duplicity who was politically decayed, economically greedy, living a degenerate life, had bad behavior, and showed no signs of restraint after the 18th CPC National Congress, the statement read.

Zhang committed suicide in an attempt to evade the punishment of Party discipline and state laws, it added.