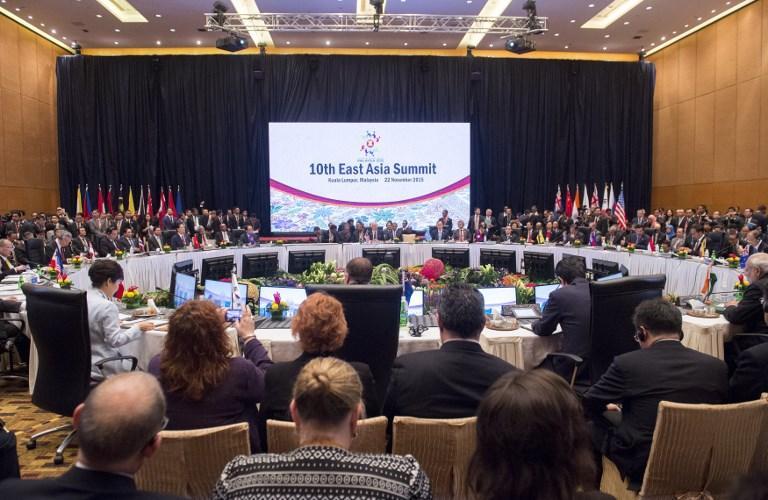 Leaders participate in the East Asia Summit at the Kuala Lumpur Convention Centre in Kuala Lumpur on November 22, 2015, on the sidelines of his participation in the Association of Southeast Asian Nations (ASEAN) Summit. (SAUL LOEB / AFP)

MANILA - The 12th East Asia Summit (EAS) and related meetings take place here from Monday to Tuesday as leaders of member states of the Association of Southeast Asian Nations (ASEAN) gather for their 31st annual summit.

The EAS is an annual meeting by leaders of, initially, 16 countries in East Asia, Southeast Asia and South Asia. The membership has now expanded to 18 countries, including 10 ASEAN member states and six dialogue partners -- China, Japan, South Korea, India, Australia, New Zealand as well as the United States and Russia as new comers.

Since its inception in 2005, the EAS has served as a forum for dialogue on broad strategic issues of relevance to East Asia as well as other regional and global issues, with the focus on areas such as international terrorism, energy, infectious diseases, sustainable development and poverty reduction.

The historic decision for the ASEAN to host the first EAS was made at the ASEAN Plus Three (China, Japan and South Korea) Summit in November 2004.

The 1st EAS was inaugurated on Dec 14, 2005 in Kuala Lumpur, Malaysia. Leaders signed the Kuala Lumpur Declaration at the East Asia Summit.

At the 2nd EAS in January 2007 in Cebu, the Philippines, leaders signed Cebu Declaration on East Asian Energy Security.

The 3rd EAS was held in November of 2007 in Singapore. Leaders at the summit adopted the Singapore Declaration on Climate Change, Energy and the Environment.

The 5th EAS was chaired by Vietnam in October 2010. The participants issued the Hanoi Declaration commemorating the fifth anniversary of the EAS.

The 7th EAS adopted the Phnom Penh Declaration in November 2012, pledging to help narrow development gap among ASEAN member states so as to achieve the ASEAN Community by the end of 2015.

Leaders of ASEAN countries and dialogue partners adopted a Declaration on Food Security at the 8th EAS in the Bruneian capital of Bandar Seri Begawan in October 2013, pledging to increase cooperation to strengthen food and energy security.

The 9th EAS in Nay Pyi Taw, capital of Myanmar, looked forward to further strengthening and consolidating the EAS process as EAS approaches its 10th anniversary. The summit welcomed the Declaration on Strengthening the ASEAN Secretariat and Reviewing the ASEAN Organs and commended the High-Level Task Force (HLTF) for its efforts in developing its recommendations.

The 10th East Asia Summit was held in Kuala Lumpur, Malaysia, in November 2015. Participants discussed key issues of global and regional politics, exchanged views on the initiative of participating countries in regional security, the fight against terrorism and illegal migration, financial and economic stability and development of free trade areas in the Asia-Pacific.

At the 11th East Asia Summit held in the Lao capital Vientiane, the EAS leaders adopted the Vientiane Declaration on Promoting Infrastructure Development Cooperation in East Asia proposed by Laos, EAS Declaration on Strengthening Responses to Migrants in Crisis and Trafficking in Persons, and EAS Statement on Non-proliferation.