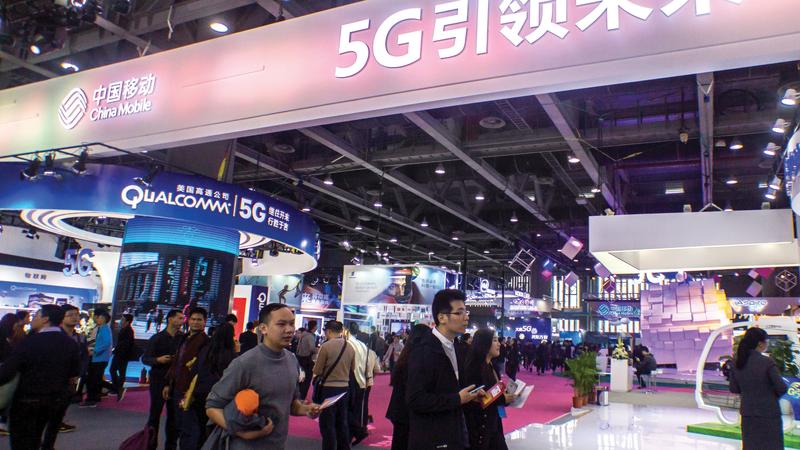 A 5G logo is displayed at the China Mobile booth during an exhibition in Guangzhou, South China’s Guangdong province, on Nov 25 last year. The Chinese telecom giant plans to launch a 5G standalone commercial network by 2019. (PHOTO / IMAGINECHINA)

Aquiet revolution taking place in the telecommunications sector will fundamentally change how we live and work.

The fifth generation of wireless systems (5G) will eventually govern everything from driverless cars to powering fully automated smart cities where sensors will control things such as traffic flow, utilities, heating and lighting.

China, the United States, Japan, South Korea and a handful of telecom companies are at the forefront of developing, testing and deploying the technology that will drive the world’s economy in the decades to come.

SingleRAN Pro offers 2G, 3G, 4G and 5G all on one network, an “agile architecture for diverse services, and an automatic intelligent management system”, Huawei said.

Analysts say the focus is not about getting faster cell phones — it is about shaping the development of technology that will influence everyone’s lives by the 2020s and beyond.

They say that within the next 10 years, billions of new connected devices will come online. These will need to transmit significantly more data, and do so reliably.

To meet the new demands and make the transition possible, 5G technology will use new frequencies of spectrum — the radio waves used to carry cellular signals.

According to the US-based geopolitical intelligence group Stratfor, 5G represents “a great leap forward over its relatively pedestrian predecessors”.

Therefore, “countries and companies with ambitions in the field are well aware of the need to stay ahead of the pack for what is certain to be a strategic resource. And few countries have been as bullish on pursuing 5G as China,” Stratfor said.

Quah Mei Lee, industry principal, telecoms and payments strategy, for consulting and research group Frost & Sullivan, said: “China is well placed as technology leader when it comes to the development of 5G technology.”

“Together they aim to bring down capex (capital expenditure) costs for 5G deployment by Chinese mobile network operators,” Quah said.

She added that China Mobile is a key 5G player in China and is working toward launching a 5G standalone commercial network by 2019.

Shenzhen-based Huawei said in a statement on April 16 that the mobile broadband (MBB) industry faces profound changes in the lead-up to 5G.

It said MBB-network-empowered sectors such as the internet of vehicles and VR/AR (virtual reality/augmented reality) are experiencing structural changes, offering infinite opportunities for growth and new services.

A recent study conducted by telecom consulting and research firm Analysys Mason said that China had the best combination of wireless carriers committed to the technology, government backing for research, a clear rollout plan by 2020, and government commitment on the spectrum critical to delivering wireless services.

The 5G revolution, however, will not bring change overnight.

“We’ll have to wait for at least a decade to see new developments such as autonomous cars, buses (and) trucks on streets and highways using 5G connectivity,” said Stephane Teral, executive director of research and analysis, and an adviser for mobile infrastructure and carrier economics at IHS Markit.

“What we are looking at (5G) is more an evolution than a revolution,” he told China Daily Asia Weekly. “As an evolution, it works with 4G — it’s a sort of 4G-plus-plus, or 4G on steroids.”

“We are currently in the process of selecting the technologies that will be used in 5G specifications. This process will be finalized in 2020, taking into account the additional spectrum that will be harmonized globally by the ITU World Radiocommunication Conference,” an ITU spokesperson said.

Held every three to four years, the next ITU World Radiocommunication Conference is scheduled for 2019 in Sharm El Sheikh, Egypt.

Nicole McCormick, practice leader, broadband and multiplay, with Ovum, a digital economy research and consulting business, said: “5G infrastructure will not be the biggest barrier to 5G’s commercialization. Rather, the biggest unknown is what the use cases will be.

“There’s no easy answer to that, as 5G will roll out in stages, with the first stage really only allowing the customer to do what they do today — but better,” she said.

“What we do know is that 5G will command a premium to start with. It will target businesses and some consumers such as technology-first movers and heavy video users.”

She said the early use case for 5G is twofold: Enhanced mobile broadband (eMBB) and fixed-wireless 5G (which requires a router in the home).

“eMBB will allow the user to do what they do today, but at a much faster speed. In turn, services such as advanced augmented reality over a 5G smartphone will use more bandwidth but the quality of experience of this service for the end user will be far greater on 5G than over Long-Term Evolution (LTE).”

LTE is a standard for high-speed wireless communication for mobile devices and data terminals.

“One of the key game-changers for 5G is that it will enable ultra-reliable, low latency (less than 1 millisecond delay) services, designed for medical applications, critical industry applications and autonomous vehicles that demand high performance. Such services could emerge around 2022,” McCormick said.

She added that 5G services in Asia Pacific should launch in 2019. “Markets such as Australia, China and South Korea will lead the pack. Smartphones that are 5G-enabled will appear in the market by mid-2019, while fixed-wireless service will emerge slightly before that.”

As 5G becomes a reality, its use will cut across all levels of society. It will have an impact on urban planning and the development of what are now termed ‘cities of the future’.

“These investments in digital infrastructure are designed to improve the way we manage the built environment and confront the challenges of urbanization.

“From mandating the construction of energy-efficient buildings to creating intelligent transport networks, cities are seeking to become smarter.”

Thomas said the sheer number of connected devices required to meet the aspirations of smart cities could create a serious bottleneck in the network. However, this could be addressed by 5G’s mMTC (massive machine-type communications), “which not only promises expanded bandwidth but also a mechanism for lower cost per bit compared with today’s options”.

“Traffic and infrastructure management, such as autonomous navigation (as in driverless cars) would benefit dramatically from low latency capabilities that 5G offers,” he said.

“Low latency is also expected to lead to the creation/commercialization of ‘tactile internet’ (real-time interactive systems), which is often believed to be the next evolution of the internet of things.”

But not all is smooth sailing with 5G. On April 16, the US Department of Commerce banned ZTE from buying any US technology for seven years for alleged violations of the country’s export control regulations.

ZTE said in a statement on April 20 that it will not accept the ban, calling the decision “unfair”.

“The ban will not only severely impact the survival and development of ZTE, but also cause damage to all partners of ZTE including a large number of US companies,” said the statement.

It is “unacceptable” that the US side insists on unfairly imposing the most severe penalty against ZTE, even before the completion of an investigation, the statement said.

“From a 5G telecom equipment point of view, I don’t think this hurts the company too badly, but this will hurt 5G smartphones and any aspirations in the 5G edge data center,” Patrick Moorhead, president and principal analyst of Moor Insights and Strategy, a global technology consulting company, told Xinhua.