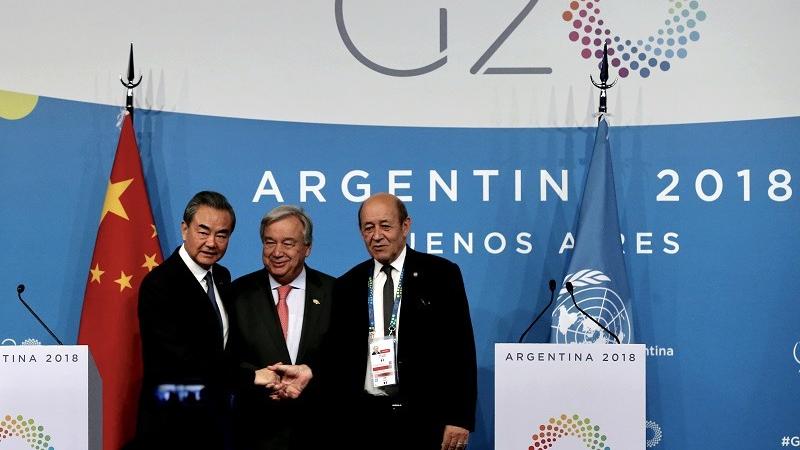 China, France and the United Nations reiterated their firm commitments to work together on combating climate change after a three-party meeting on the sidelines of the G20 Leaders' Summit.

The three agreed that the international community should work together to present a united voice on climate change and jointly promote it to the UN Framework Convention on Climate Change to achieve significant progress.

During the meeting, Wang outlined China's position and proposal to promote international cooperation on climate change control, calling on all countries to be responsible, take action, strengthen cooperation, and jointly promote multilateral processes.

Wang emphasized three key words: commitment, action and collaboration. "Three years ago, President Xi Jinping pointed out at the Paris Conference on Climate Change that the Paris Agreement was not the end, but a new starting point," Wang said.

The 24th Conference of Parties to the United Nations Framework Convention on Climate Change, also known as COP24, will be held in Katowice, Poland, this month. Wang described this as an important step toward a multilateral process on climate change.

"It is vital for each party member to cement their confidence in dealing with climate change and effectively implement the Paris Agreement," he said.

Wang said China's determination to deal with climate change is unswerving. The country has been vigorously implementing the concepts of innovation, coordination, becoming green, openness and sharing, as well as its National Plan on Climate Change (2014-20).

China was the first nation to come up with a national plan on implementing the 2030 Agenda for Sustainable Development, embarking on a path of green, low-carbon and sustainable development.

Wang stressed that China has been consistent in its stand on multilateral processes and has been strengthening global climate control and deepening South-South Cooperation. Through its green Belt and Road Initiative, Beijing aims to achieve global cooperation on low-carbon development to build a global ecological civilization.

Wang also said China is willing to work with France to get positive results at COP24 in Katowice in order to build a beautiful world for humankind.

Le Drian indicated that France was willing to cooperate with China on climate change dialogue, including supporting developing countries' transitions to green and low-carbon development through third-party cooperation. He also indicated that France believes that China's hosting of the 2020 Global Conference on Biological Diversity Conservation will be a success.

Guterres said climate change was "running faster" than predicted and "we are facing an extremely difficult situation". It was now clear that the Paris Agreement needed to be fully met, he said.

"It is my belief that technology is on our side - we see renewable energy is now cheaper and more competitive than fossil fuels, we see the green economy becoming the best economy, and I have no doubt that those who will not bet on the green economy will have a gray future," he said.

Guterres thanked China for its important leadership in the global response to climate change. He also applauded China and France for leading the international community to actively cope with the enormous challenges they face.