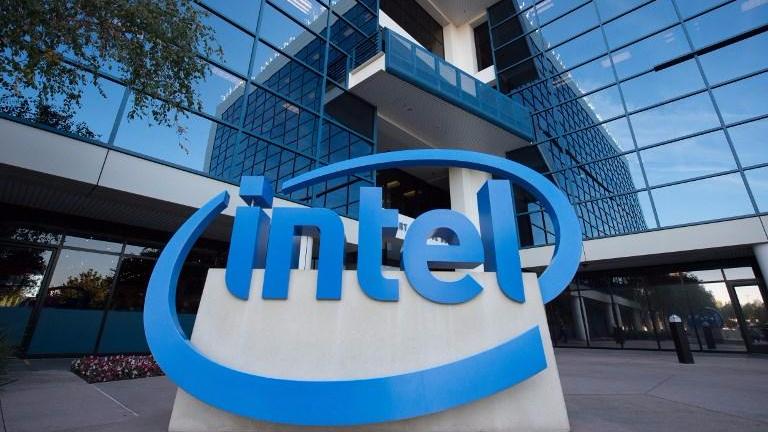 An Intel sign is seen at the Intel Museum in Santa Clara, California on Nov 4, 2016. (JOSH EDELSON / AFP)

Intel Corp on Thursday gave a bullish forecast and blew past Wall Street expectations for the fourth quarter on the strength of data center sales, the business it sees as key to its transformation from a PC supplier.

Intel stock rose 3.8 percent to US$47.06, boosted by a 10percent dividend hike and the forecast, which signaled that Intel is succeeding in containing fallout from recently disclosed security flaws that could allow hackers to steal data from computers.

Those flaws, dubbed Spectre and Meltdown, created global concern among technology users, and Intel acknowledged on Thursday, for the first time, that the fallout could hurt future results. But Intel executives consistently indicated that they did not expect that to happen.

Software fixes for the problems would be succeeded by solutions designed into Intel chips themselves later this year, Chief Executive Brian Krzanich said on a conference call.

In an interview ahead of Intel's earnings call with investors, Chief Financial Officer Bob Swan said the company sees no "meaningful impact" on corporate earnings from the vulnerabilities.

“They had all these bullets flying at them with these chip flaws, but when I look at these numbers, it’s a blowout across all metrics,” said Daniel Morgan, a fund manager with SynovusTrust, which holds Intel shares. “That makes it a bulletproof quarter.”

Revenue from the company's higher-margin data center business rose about 20 percent to US$5.58 billion, beating the average analyst estimate of US$5.13 billion, according to Thomson Reuters I/B/E/S. Investors had targeted 10 percent growth, said Kevin Cassidy, an analyst at Stifel.

“Data center group is one of the key metrics we are watching. It’s certainly a positive to see that turn up," said Peter Karazeris, an analyst Intel investor Thrivent Financial.

Revenue from Intel's PC group hit US$9 billion for the quarter, a 2 percent decline from the year before, but ticked up3 percent for the year to US$34 billion.

Intel also saw strong growth in two small non-PC businesses that it hopes to expand in the future. Its so-called internet of things business, which focuses on connecting street lights and industrial machines to the web, expanded 21 percent to US$879million for the quarter. Programmable chips, which customers like Microsoft Corp are experimenting with using in data centers, grew 35 percent to US$568 million for the quarter.

Intel predicted US$65 billion in revenue for 2018, well above expectations of a US$63.7 billion forecast. The company also said its tax rate would be 14 percent for 2018 after changes in US tax law that it executives said created a "level playing field "for US manufacturers.

Intel warned in its earnings release that fallout from the discovery of Spectre and Meltdown could hurt future results, as well as customer relationships and the company's reputation.

Analysts have said the biggest risk to Intel might come from customers using the disruption caused by fixing the bug as an excuse to press for lower prices.

The company posted a loss of US$687 million, or 15 cents per share, in the fourth quarter ended Dec. 30, including a US$5.4billion charge related to recent changes in US tax law.

Excluding items, the chipmaker earned US$1.08 per share for the fourth quarter, up 39 percent from 79 cents a year earlier.

Those figures beat analysts' expectations of a profit of 86cents per share on a revenue of US$16.34 billion, according to Thomson Reuters I/B/E/S.