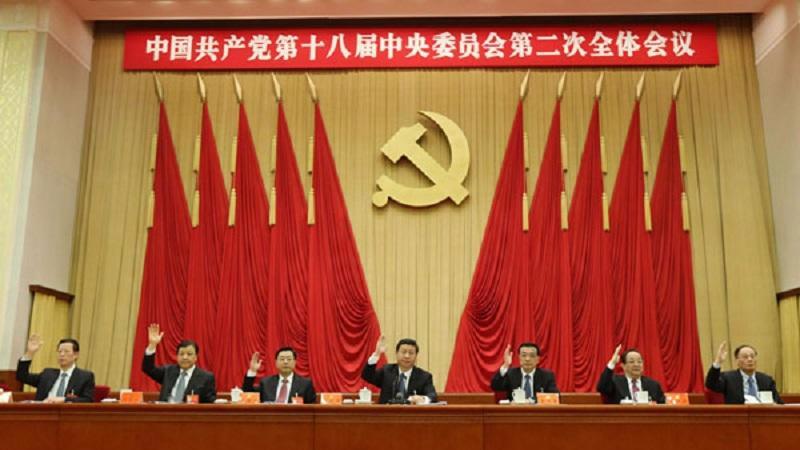 China's top leaders attend the second plenary session of the 18th Central Committee of the Communist Party of China (CPC) at the Great Hall of the People in Beijing, capital of China, Feb 28, 2013. (Photo / Xinhua)

BEIJING - July 1 marks the 96th founding anniversary of the Communist Party of China (CPC). International experts have widely acknowledged that China, under the leadership of the CPC, has become a crucial engine for global economic growth and a staunch guardian of global peace and development.

In the context of today's constantly changing global political and economic landscapes, the CPC offers extensive experience in state governance for other countries to draw upon.

Over the last three decades, China has won broad acclaim from the international community, especially after the 18th National Congress of the CPC held in November 2012, as China has achieved remarkable economic growth while taking an active part in global governance.

Analysts have pointed out that under the CPC, China has wielded great influence in the international financial system, while striking a balance between economic development and environmental protection.

"Under the leadership of the CPC, China has been active in participating in global governance. In particular, it has exerted more influence in improving the global financial system," said Sergey Lukonin, head of Economy and Politics of China at the Institute of World Economy and International Relations of the Russian Academy of Sciences.

"The China-initiated Asian Infrastructure Investment Bank and the New Development Bank, as well as the Chinese renminbi's inclusion in the SDR (Special Drawing Rights) basket, are a testament to China's rising impact on the international financial system," Lukonin said.

"The CPC has called on the sort of economic growth that is innovation-driven and sustainable, and has been searching for new sources of economic growth, which makes China younger and radiate more vitality," she said.

To address environmental degradation and global warming, China has proactively pushed for energy saving and emissions reduction, cut overcapacity in coal, strengthened the supervision and administration of industrial pollution and promoted the use of new-energy vehicles with subsidies.

China has made great contributions to the signing of the Paris Climate Agreement, as the principle of "common but differentiated responsibilities" proposed by China has gained much popularity and support, said Nadya Helmy, professor of political sciences with Beni Suef University.

In the diplomatic field, under the leadership of the CPC, the Chinese government has committed to the principles of mutual benefit and win-win, which is favorable to global governance.

The Belt and Road Initiative has also forged a bond between China and its neighboring countries through trade and economic and cultural cooperation.

"The China-proposed Belt and Road Initiative has laid a solid foundation for the prosperous economic development in the region, which has won international recognition and attracted the international community to actively participate," said Wichai Choi, senior vice president of Kasikorn Bank in Thailand.

One important lesson for parties in other countries to learn from the experience of the CPC's success, in Lukonin's opinion, is that the CPC has led the country to actively carry out in-depth reforms while securing social stability at the same time, which is a great achievement.

Also, the CPC has taken as its objective to safeguard the people's interests and implemented social policies toward that goal, Lukonin said.

"Another lesson is that China, under the leadership of the CPC, always gives importance to the development of human resources and cultivation of talents, which is one of the major strategies to keep its national competitiveness," he added.

Formulating policies able to promote social progress and meet more of the people's rights is a top priority for a party, said Javier Miranda, president of Uruguay's Broad Front Party.

"Under the CPC leadership, China has not only maintained rapid economic growth, but also let the development fruits benefit wide-ranging areas including the people's living (conditions), health care and public education," he said, adding that this experience can be used by foreign ruling parties as a reference.