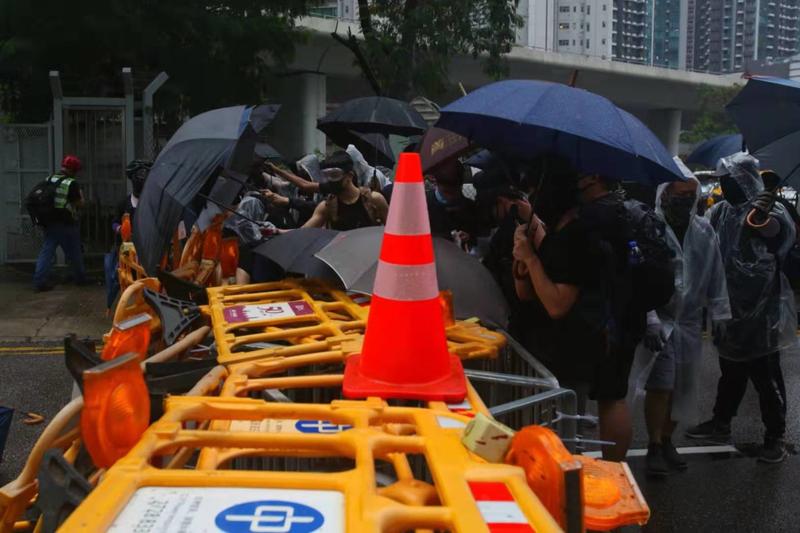 HONG KONG — May was preparing dinner on the evening of Oct. 13 when she learned that a police officer on duty had been slashed in the neck. She immediately called her husband, Alex, but there was no answer. She then frantically sent him a message, but there was no reply.

Ten minutes later, her phone rang. It was Alex's colleague. Her nightmares and fears had become a reality - the injured police officer was her husband.

I am usually the last one on the team to leave the scene. That's probably why I was the assailant's target, but I would do the same thing if given a second chance

"(In the moment), my mind went completely blank," May said.

Only a few hours prior, Alex was deployed with a Hong Kong police emergency unit to the Kwun Tong metro station in Kowloon to handle reports of criminal acts by black-clad radicals.

When Alex and colleagues were about to leave the scene, he felt someone poking his neck from behind. He looked back and saw a hand with a box cutter. He did not realize he had been injured until he subdued the assailant and found his clothes soaked in blood.

"My colleagues looked very nervous, so I realized that my injury was serious," he said in an interview with Xinhua.

When May rushed to hospital, she found her husband surrounded by doctors with his neck wrapped in gauze waiting to go into surgery.

"He spotted me in the crowd and tried to say something to me, but his voice was very weak," May described.

The attack on Alex left a five-centimeter-deep cut on the right side of his neck. A vein and a vagus nerve were severed, with the attacker coming dangerously close to severing the carotid artery.

"My two kids could have lost their father," May said, voice trembling.

"I cannot figure out why he (the assailant) would hurt my husband like this. My husband was just doing his job as a law enforcement officer," she said.

After undergoing surgery to reconnect the severed vein and nerve, Alex stayed in the intensive care unit for several days, suffering from great pain.

"My hands were restrained to prevent me from scratching my wound. The doctor used morphine to relieve my pain, but when the drug would wear off, the pain was almost more than I could bear," he said.

After he was discharged from the hospital, Alex had to go to medical consultations every two to three weeks. Due to the injury of the vagus nerve, which controls the right vocal cord, he also needs to undergo speech therapy for at least six months and may suffer permanent damage to his voice.

"My right vocal cord can not vibrate as normal anymore. Now, I rely solely on my left vocal cord to speak. That's why my voice is weak, and I cough a lot," he said.

"He will not be able to speak loudly, or for a long time," May said, adding that "he wants to chat with the kids, but sometimes they can not hear his words clearly."

Apart from being unable to communicate with his children, Alex also feels frustrated that he can not pick them up from school as before for fear of being doxxed.

"I don't want my kids to be bullied because of me, even though I don't think being a police officer or being attacked like this is a disgrace," he said.

After Alex's injury, there were also rumors circulated online about him, such as allegations that he is a police officer from the Chinese mainland. In the interview, Alex rebutted the rumors as "ridiculous."

According to the latest figures released by the Hong Kong police, around 483 policemen have been injured in related law enforcement actions since June, while the private information of thousands of police officers and their families has been maliciously leaked online.

After Alex's injury, there were also rumors circulated online about him, such as allegations that he is a police officer from the Chinese mainland. In the interview, Alex rebutted the rumors as "ridiculous."

"I really can not understand why those young people, who have received so much education and should have independent analytical thinking, would buy into such ridiculous rumors," he said.

As a sergeant with more than 20 years of service, Alex said when he leads his crew in an operation, he has the responsibility to ensure that no one is left behind as a police officer alone faces a high risk of being attacked by black-clad radicals.

"I am usually the last one on the team to leave the scene. That's probably why I was the assailant's target, but I would do the same thing if given a second chance," he said.

May said she would continue to do her best to support Alex, even if he decides to go back to the front line in the future.

"Thanks to the help of our relatives and friends, the worst is over," she said.

Although they were disappointed by the fact that many young students, like the assailant, took to the street and committed violence against police officers, the couple still felt encouraged by support from many Hong Kong residents.

"The medical staff treated me professionally and carefully. Many people sent me encouraging messages and cards. I believe there are still many people supporting the police in maintaining order and enforcing the law," Alex said.

(Alex and May preferred not to use their real names for safety concerns.)