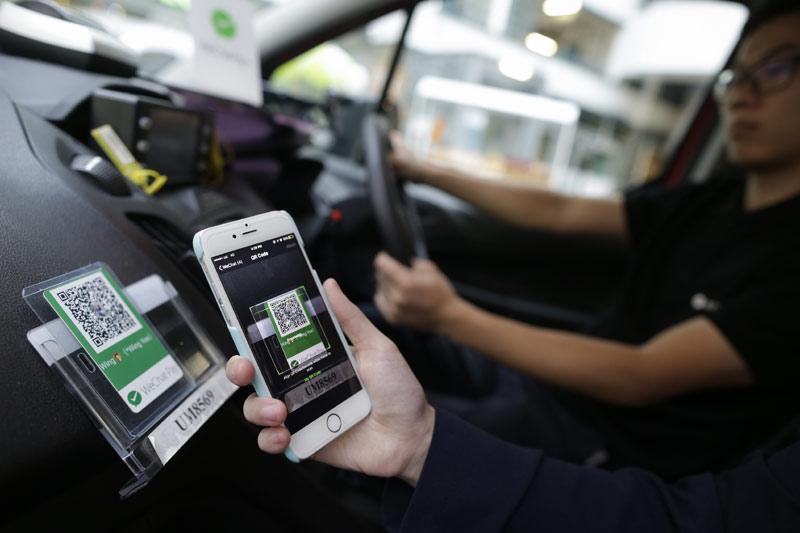 A participant pays for the taxi fare via WeChat during a press conference for WeChat Pay Hong Kong in Hong Kong on Oct 31, 2017. (ROY LIU / CHINA DAILY)

Hong Kong customers and merchants now have a new option to settle bills – as WeChat Pay Hong Kong on Tuesday revealed a series of payment solutions for people’s daily transactions.

The new features let people transfer money by displaying and scanning each other’s payment codes. Previously, WeChat users could transfer money only by becoming friends on the instant-message application. This new function is especially useful for taxi payments, as passengers can pay taxi fares by scanning taxi drivers’ QR codes when they run out of cash.

It is estimated that more than 1,000 taxis will accept WeChat Pay by the end of this year

It is estimated that more than 1,000 taxis will accept WeChat Pay by the end of this year, said Norman Tam Lok-man, general manager of Tencent’s International Business Group.

Another function, called Quick Pay, is designed for merchants who have already installed point of sale (POS) systems to handle transactions. After connecting their POS system with WeChat Pay, they can complete a transaction quickly by scanning a customer’s payment code.

For small- and medium-sized enterprises that worry about setting up costly POS systems, an application called WeChat Pay Checkout can help them generate their own QR codes to receive payment. The service is expected to be launched in December.

Currently, only WeChat users registered with Hong Kong telephone numbers can enjoy this service. After binding their credit cards with a WeChat Pay account and inputting a six-digit payment password, users can settle payments through WeChat.

On Sept 26, Alibaba Hong Kong said it will join forces with CK Hutchison Holdings, of which Li Ka-shing is the chairman, to expand the reach of digital payment services. When they made the partnership announcement, Alipay became accepted in about 4,000 retail outlets in Hong Kong.

When asked about how it could stay ahead of the competition posed by other service providers such as Octopus, Tam said WeChat users can enjoy the convenience of not having to install additional applications, as the functions are embedded in WeChat.