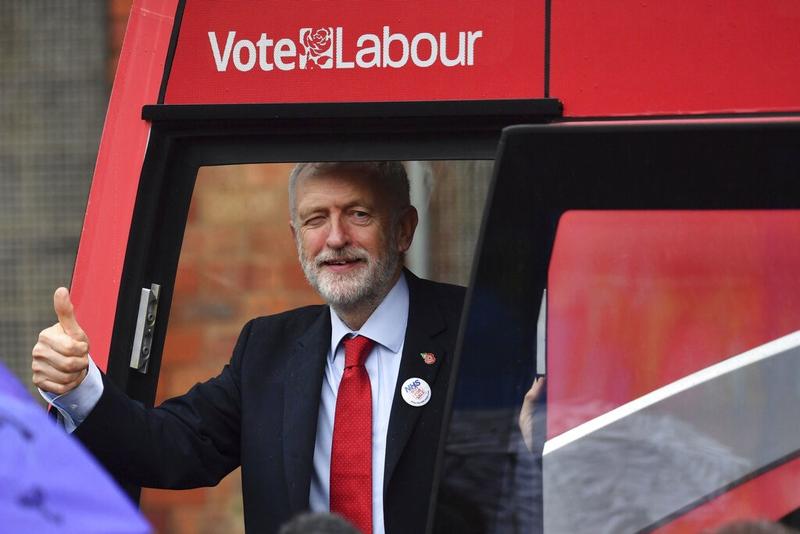 They are divided, unpopular and have been accused by their own former colleagues of racism. But Jeremy Corbyn and his allies in the UK's Labour Party could yet take power in next month's general election.

I regard myself as proper, decent, traditional Labour. I just think Jeremy Corbyn’s not fit to run the country.

After Prime Minister Boris Johnson had a terrible first day campaigning on Wednesday, it was Corbyn's turn on Thursday.

As bad as Corbyn looks on paper, he has a potential path to power. The Conservatives have been in office so long that austerity-bitten voters want change. Opinion polls have misjudged the public mood before. Johnson is a gaffe-prone leader who is a divisive figure in the Brexit landscape.

If Corbyn shores up his support in Labour heartlands in northern and central England, and with Johnson viewed increasingly with suspicion in Scotland, an unpredictable election could see the prime minister ousted.

The Labour leader himself is a deeply divisive figure in his own tribe. Just this week, his deputy quit and a former Labour member of Parliament publicly urged the country to vote Conservative. The Jewish Chronicle newspaper then ran a front page article describing Corbyn as an anti-Semite.

It was a grim narrative for a political opposition hoping to persuade the country to put it into power on Dec 12. Labour could be doing so much better.

The Conservatives have been in office for nine years, and have been tearing themselves apart over Brexit for the past three. Johnson is now seeking to do something relatively rare for a government in British elections and increase the number of seats his ruling party has in parliament.

Corbyn meanwhile has been calling for an election ever since the last one, in June 2017, put him within striking distance of replacing the Tories as the government. Yet with the campaign now under way, the opinion polls tell a very different story.

After rating close to the Conservatives for much of the last two years, Labour goes into the race behind. According to YouGov Plc, it hasn't polled above 27% in six months. The Conservatives are on 36%.

Corbyn, in particular, polls badly. Just 23% of people say they have a positive view of him -- against 59% who say they have a negative view. More than half of people who voted Labour in the 2017 election think Corbyn should be replaced as leader.

It's a view shared privately by many Labour MPs, including some inside his shadow cabinet team. Others, like Ian Austin, have gone so far as to quit the party in protest at his leadership. "I regard myself as proper, decent, traditional Labour," Austin told the BBC. "I just think Jeremy Corbyn's not fit to run the country." Saying people should vote for Johnson instead, he added: "I can't believe it's come to this."

For Austin, the final straw was the rise of anti-Semitism within Labour under Corbyn. On Friday, the Labour leadership insisted it had taken steps to address anti-Semitism.

"In recent times we have seriously improved our processes, in a way that we took too long to do," party spokeswoman Shami Chakrabarty told BBC Radio. "Because we dragged our feet for so long, there is a trust gap," she said. Labour has "got to demonstrate" over time how serious it is about tackling anti-Semitism.

The Jewish Chronicle accused Corbyn of "near total inaction" which it said had emboldened anti-Semites in the party. "How can the racist views of a party leader -- and the deep fear he inspires among an ethnic minority -- not be among the most fundamental of issues?" it asked.

Within Labour, Watson had been the figurehead of internal opposition to Corbyn, staying in place despite attempts to sideline or remove him. Though he said his decision was "personal, not political," it was notable that his letter of resignation expressed no desire to see either a Labour government or Corbyn as prime minister.

Corbyn's team is likely to be happy to see the back of Watson, but his departure raises the same question for Labour that Philip Hammond's did for the Conservatives earlier this week: What does it say about the party that lifelong members no longer see a future representing it in parliament?

After decades in which Labour has aimed for the center ground of politics, talking about wealth creation as well as public spending, Corbyn has moved it firmly to the left. It's not simply about taxation and spending. On foreign policy, Corbyn's position is far outside the consensus of post-war British politics. He's a critic of NATO, viewing it as a "danger to world peace."

Yet none of this means Corbyn can't become prime minister next month. The 2017 election saw him shrug off criticism of his views, and pick up votes where they mattered.

Corbyn's strategy then included a series of voter-pleasing offers such as extra bank holidays. Those tactics seem to be in play again. On Friday, Labour will announce a package of measures to improve working conditions for women, included a strategy to reduce the gender pay gap, extra maternity pay and the ability for both women and men to choose working hours that suit them.

For his part, Johnson's holds a Brexit position that has forced him into a strategy where he risks losing seats in pro-EU cities, the south of England, and Scotland. If he is to retain power and win a majority, Johnson must prevail in northern and central England -- but many of these are Labour strongholds that the Tories have never won.

When they tried this strategy in 2017, they came within a few thousand votes of losing power entirely. Lifelong Labour voters in these industrial districts may still balk at ditching their tribal allegiances in order to vote for the Tories, a party many have spent their lives hating.

There's another factor counting in Corbyn's favor. If the Conservatives are the largest party after the election but fall short of an overall majority, they will probably find it difficult to form a coalition or even a looser alliance to prop up Johnson.

In another so-called hung parliament, Corbyn would have more potential allies among smaller parties. The Scottish National Party has said they would never work to keep Johnson in office but could help Corbyn in exchange for a referendum on independence for Scotland.

The smaller Liberal Democrats have ruled out supporting a Corbyn government, but party leader Jo Swinson might face the same choice as Austin: Corbyn or Johnson. And as an opponent of Brexit, she couldn't back the Tory leader.